2013-01-15-waterfluoridationfacts.jpg (800×1218) New Report: Unregulated Contaminants Common In Drinking Water. Traces of 18 unregulated chemicals were found in drinking water from more than one-third of U.S. water utilities in a nationwide sampling, according to new, unpublished research by federal scientists. 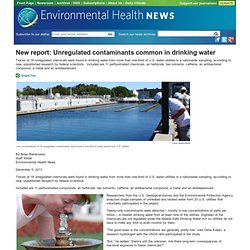 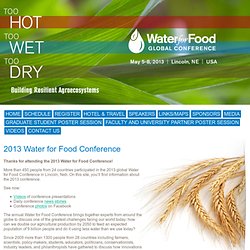 More than 450 people from 24 countries participated in the 2013 global Water for Food Conference in Lincoln, Neb. On this site, you’ll find information about the 2013 conference. See now: Rivers Aglow With Ethereal Globes of Color. The River of Light is a touring art installation by Creatmosphere that Celebrating the rivers of world through public art. Three Reasons to Take Action on Water. Publications Blog Opinions, ideas, and notes from the field from BSR staff members around the world. 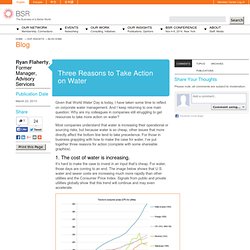 Research Reports Independent, business-critical research to help you stay ahead of the curve and advance corporate responsibility. Sustainable Investment in China A quarterly newsletter will help investors in China understand how sustainable investing can mitigate business risk and create opportunities for greater financial as well as social and environmental returns. Sustainability Matters ★ Trends and forecasts in water use, by sector. Earth contains a vast amount of water, but scientists are unsure of its origins. Imagine you own a gigantic swimming pool that's a thousand miles long and a thousand miles wide. 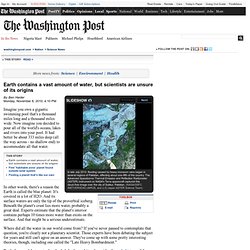 Now imagine you decided to pour all of the world's oceans, lakes and rivers into your pool. It had better be about 333 miles deep (all the way across - no shallow end) to accommodate all that water. In other words, there's a reason the Earth is called the blue planet: It's covered in a lot of H2O. And its surface waters are only the tip of the proverbial iceberg. Beneath the planet's crust lies more water, probably a great deal. Where did all the water in our world come from? But before we debate water bombs, let's back up a bit and consider the early history of the sun and planets.

When our solar system began to take shape, roughly 4.5 billion years ago, it was a disk-shaped cloud of gas and dust spinning around a dense core, which became the sun. So planetary scientists have long assumed that the rocky inner planets - Mercury, Venus, Earth and Mars - lacked water when they formed. Arab world faces worsening water crisis. The Arab world, one of the driest regions on the planet, will tip into severe water scarcity as early as 2015, a report issued on Thursday predicts. 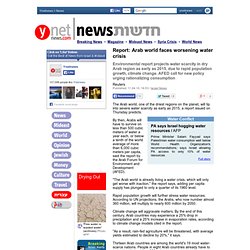 By then, Arabs will have to survive on less than 500 cubic meters of water a year each, or below a tenth of the world average of more than 6,000 cubic meters per capita, said the report by the Arab Forum for Environment and Development (AFED). "The Arab world is already living a water crisis, which will only get worse with inaction," the report says, adding per capita supply has plunged to only a quarter of its 1960 level. Rapid population growth will further stress water resources. According to UN projections, the Arabs, who now number almost 360 million, will multiply to nearly 600 million by 2050. Climate change will aggravate matters. "As a result, rain-fed agriculture will be threatened, with average yields estimated to decline by 20%," it says. Thirteen Arab countries are among the world's 19 most water-scarce nations. Marine Stewardship Council - home — MSC. Water. Greywater Recycling.