Uncontrollable Gas Leaks In Texas Top California’s Leak, So Why Haven’t We Heard About It? Texas gas leaks are worse than the California leak and show no sign of stopping. 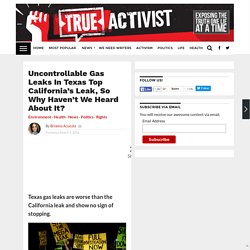 Credit: Inhabitat. Pennsylvania Fracking Water Contamination Much Higher Than Reported. The headline flew around the globe like wild fire. 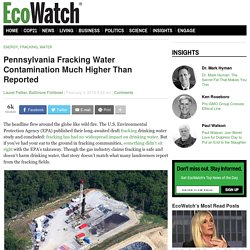 The U.S. Environmental Protection Agency (EPA) published their long-awaited draft fracking drinking water study and concluded: fracking has had no widespread impact on drinking water. But if you’ve had your ear to the ground in fracking communities, something didn’t sit right with the EPA’s takeaway. Though the gas industry claims fracking is safe and doesn’t harm drinking water, that story doesn’t match what many landowners report from the fracking fields.

At least in Pennsylvania, the reason for this discrepancy comes down to a singular issue: mismanaged record-keeping and reporting by the Department of the Environment (DEP). What’s Going On Health-Wise From LA’s Methane Leak Problems? Catherine J. 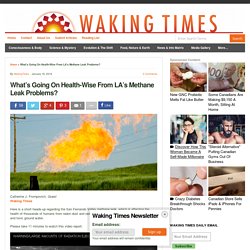 Frompovich, GuestWaking Times Here is a short heads-up regarding the San Fernando Valley methane leak, which is affecting the health of thousands of humans from radon dust and radiation damage, plus other aerosolized toxins and toxic ground water. Please take 11 minutes to watch this video report: The current acute problem has been ongoing since October 2015 but, actually, was put into place years ago with the irresponsible disposal of nuclear waste from nuclear power plants.

This One Suit Could Take Down Oklahoma's Oil And Gas Industry. Less than a week after state regulators shut down seven waste disposal wells in Oklahoma, two companies being sued for earthquake damages are asking the case be dismissed. 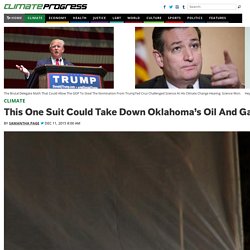 Spess Oil Company and New Dominion LLC say that plaintiff Sandra Ladra waited too long to file her suit, which asks for $75,000 in damages stemming from being hit by falling rock when an earthquake struck her home and damaged her chimney. Pennsylvania Township Passes Bill of Rights Banning Fracking Wastewater Injection Wells. Last night, the people of Grant Township adopted the country’s first municipal charter establishing a local bill of rights. 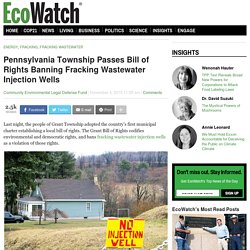 The Grant Bill of Rights codifies environmental and democratic rights, and bans fracking wastewater injection wells as a violation of those rights. Grant joins growing numbers of communities across Pennsylvania and the U.S. that are coming together in a community rights movement to stand up to a system of law that forces fracking waste wells and other practices into communities, and protects corporations over people, communities and nature. The passage of the Grant charter comes fourteen months after the township was sued by Pennsylvania General Energy Company (PGE) and the Pennsylvania Independent Oil and Gas Association (PIOGA). 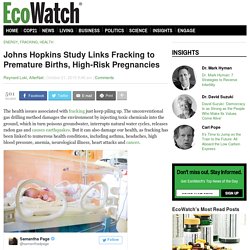 The unconventional gas drilling method damages the environment by injecting toxic chemicals into the ground, which in turn poisons groundwater, interrupts natural water cycles, releases radon gas and causes earthquakes. But it can also damage our health, as fracking has been linked to numerous health conditions, including asthma, headaches, high blood pressure, anemia, neurological illness, heart attacks and cancer.

But perhaps most heartbreaking is the effect that fracking may have on babies. Studies have linked fracking to increased infant mortality and low birth weight babies. Now researchers at the Johns Hopkins Bloomberg School of Public Health have found that expectant mothers who reside near active fracking sites in Pennsylvania are more susceptible to giving birth prematurely and having high-risk pregnancies. “Now that we know this is happening, we’d like to figure out why,” Schwartz said. What the Industry Doesn’t Want You to Know About Fracking. When we hear politicians and gas companies extoll the virtues of fracking, jobs created by drilling is usually high on their list of talking points. 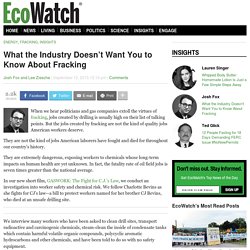 But the jobs created by fracking are not the kind of quality jobs American workers deserve. They are not the kind of jobs American laborers have fought and died for throughout our country’s history. They are extremely dangerous, exposing workers to chemicals whose long-term impacts on human health are yet unknown. In fact, the fatality rate of oil field jobs is seven times greater than the national average. In our new short film, GASWORK: The Fight for C.J.’s Law, we conduct an investigation into worker safety and chemical risk. Fracking Causes Texas Family's Water Well to Explode, Severly Burning Them. Sharon Kelly, DeSmogBlogWaking Times A family in Texas, including a four-year old, her parents and her grandfather, were severely burned when their water well ignited into a massive fireball after methane from nearby fracked wells contaminated their water supply, a newly filed lawsuit against EOG Resources and several related companies alleges. 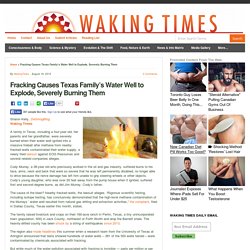 Cody Murray, a 38-year old who previously worked in the oil and gas industry, suffered burns to his face, arms, neck and back that were so severe that he was left permanently disabled, no longer able to drive because the nerve damage has left him unable to grip steering wheels or other objects. New Study Finds Connection Between Fracking And Increased Hospitalizations. A study published earlier this week reveals a significant connection between fracking and increased hospitalizations. 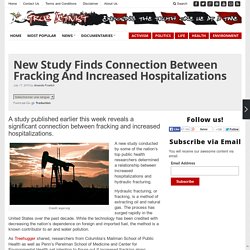 Credit: wypr.org A new study conducted by some of the nation’s top public health researchers determined a relationship between increased hospitalizations and hydraulic fracturing. Hydraulic fracturing, or fracking, is a method of extracting oil and natural gas. The process has surged rapidly in the United States over the past decade. Victims In USA And Australia Speak Out: Fracking Kills Dogs, Poisons Water And Causes Childhood Diseases. As the UK Government plots to fast-track fracking, activists in the USA and Australia talk about how the practice has destroyed lives, communities and the environment The UK Government is attempting to fast-track fracking by removing a rule that says they must consult with local residents before corporations are allowed to start test drilling. 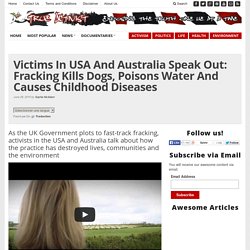 There are proposals to begin the ecocidal practice of fracking in various areas around the UK, but one place in particular is in immediate danger. The video from British campaign group 38 Degrees details how engineering giant Cuadrilla are to go ahead with plans to frack in Lancashire, a pretty region in the north of England. As one resident points out, “what happens here will affect the rest of the UK.” West Lancashire is a place of rolling green hills and flower-filled meadows, where sheep and cows graze happily in peace. Credit: Flickr / greensefa.