NASA Says Antarctica Is Gaining More Ice Than It’s Losing & Here’s Why It’s Confusing. According to a new study that was recently published by NASA, Antarctica is actually gaining more ice than it has lost. 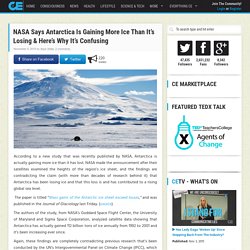 Let’s Talk for Real — About Humans and Climate Change. By Foster Gamble Climate change may be the hottest topic on the table, reaching a level of religious zealotry on both sides of the issue. 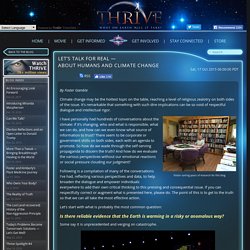 It’s remarkable that something with such dire implications can be so void of respectful dialogue and intellectual rigor. Foster sorting years of research for this blog Leslie, Rob I have personally had hundreds of conversations about the climate: if it’s changing, who and what is responsible, what we can do, and how can we even know what source of information to trust? Following is a compilation of many of the conversations I’ve had, reflecting various perspectives and data, to help broaden the dialogue and empower individuals everywhere to add their own critical thinking to this pressing and consequential issue.

Email Shows Exxon Was Studying Its Climate Impact in the '80s. Exxon scientists studied the impact of greenhouse gas emissions on global warming as far back as 1981, an indication that the company was probing the industry's potential contribution to climate change much earlier than previously reported. 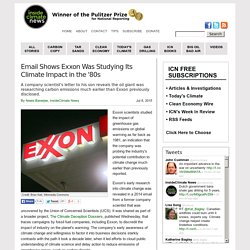 Exxon's early research into climate change was revealed in a 2014 email from a former company scientist that was uncovered by the Union of Concerned Scientists (UCS). It was shared as part of a broader project, The Climate Deception Dossiers, published Wednesday, that traces campaigns by fossil fuel companies, including Exxon, to discredit the impact of industry on the planet's warming. The company's early awareness of climate change and willingness to factor it into business decisions starkly contrasts with the path it took a decade later, when it led efforts to cloud public understanding of climate science and delay action to reduce emissions of greenhouse gases, such as carbon dioxide. 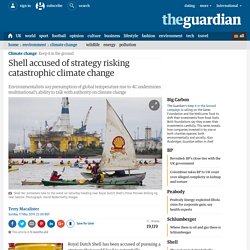 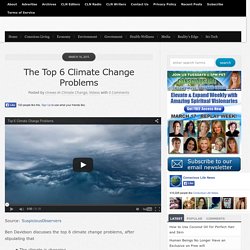 Deeper Ties to Corporate Cash for Doubtful Climate Researcher. Photo For years, politicians wanting to block legislation on have bolstered their arguments by pointing to the work of a handful of scientists who claim that greenhouse gases pose little risk to humanity. 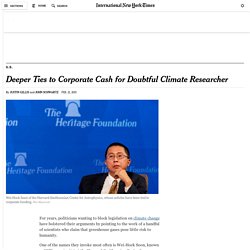 One of the names they invoke most often is Wei-Hock Soon, known as Willie, a scientist at the Harvard-Smithsonian Center for Astrophysics who claims that variations in the sun’s energy can largely explain recent global warming. He has often appeared on conservative news programs, testified before Congress and in state capitals, and starred at conferences of people who deny the risks of global warming. Climategate, the sequel: How we are STILL being tricked with flawed data on global warming. How have we come to be told that global temperatures have suddenly taken a great leap upwards to their highest level in 1,000 years? 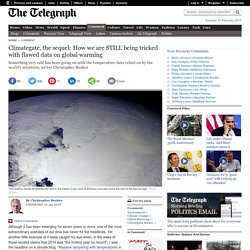 In fact, it has been no greater than their upward leaps between 1860 and 1880, and 1910 and 1940, as part of that gradual natural warming since the world emerged from its centuries-long “Little Ice Age” around 200 years ago. This belief has rested entirely on five official data records. Three of these are based on measurements taken on the Earth’s surface, versions of which are then compiled by Giss, by the US National Oceanic and Atmospheric Administration (NOAA) and by the University of East Anglia’s Climatic Research Unit working with the Hadley Centre for Climate Prediction, part of the UK Met Office. The other two records are derived from measurements made by satellites, and then compiled by Remote Sensing Systems (RSS) in California and the University of Alabama, Huntsville (UAH). Eight Pseudoscientific Climate Claims Debunked by Real Scientists. Jonathan Tucker in a cave beneath a glacier. 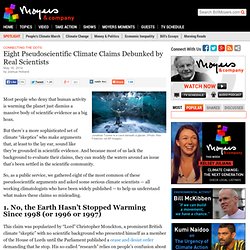 (Photo: Rex Features via AP Images) Most people who deny that human activity is warming the planet just dismiss a massive body of scientific evidence as a big hoax. But there’s a more sophisticated set of climate “skeptics” who make arguments that, at least to the lay ear, sound like they’re grounded in scientific evidence. And because most of us lack the background to evaluate their claims, they can muddy the waters around an issue that’s been settled in the scientific community. So, as a public service, we gathered eight of the most common of these pseudoscientific arguments and asked some serious climate scientists — all working climatologists who have been widely published — to help us understand what makes these claims so misleading. 1. 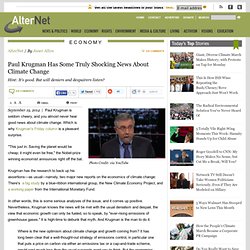 Join our email list: Stay up to date with the latest headlines via email. Paul Krugman is seldom cheery, and you almost never hear good news about climate change. "This just in: Saving the planet would be cheap; it might even be free," the Nobel-prize winning economist announces right off the bat. Krugman has the research to back up his assertions—as usual—namely, two major new reports on the economics of climate change: There's a big study by a blue-ribbon international group, the New Climate Economy Project, and a working paper from the International Monetary Fund.

In other words, this is some serious analyses of the issue, and it comes up positive. NOAA: Temperature Data Shows U.S. in Decade-Long Cooling Trend. The National Oceanic and Atmospheric Administration’s most accurate, up-to-date temperature data confirm the United States has been cooling for at least the past decade. 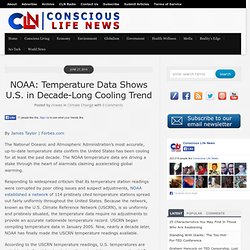 The NOAA temperature data are driving a stake through the heart of alarmists claiming accelerating global warming. Responding to widespread criticism that its temperature station readings were corrupted by poor citing issues and suspect adjustments, NOAA established a network of 114 pristinely cited temperature stations spread out fairly uniformly throughout the United States.

Because the network, known as the U.S. Climate Reference Network (USCRN), is so uniformly and pristinely situated, the temperature data require no adjustments to provide an accurate nationwide temperature record. USCRN began compiling temperature data in January 2005. According to the USCRN temperature readings, U.S. temperatures are not rising at all – at least not since the network became operational 10 years ago. A Heated Debate: Are Climate Scientists Being Forced to Toe the Line? By Axel Bojanowski | Spiegel Online International Lennart Bengtsson says he was pressured by colleagues to step down from his role at the controversial Global Warming Policy Foundation. After joining a controversial lobby group critical of climate change, meteorologist Lennart Bengtsson claims he was shunned by colleagues, leading him to quit.