What’s the Second Job of a Startup CEO?: CEO, Culture, Growth Stage. Successful startups go through three broad phases as they scale, and a startup CEO’s job changes dramatically in each phase. 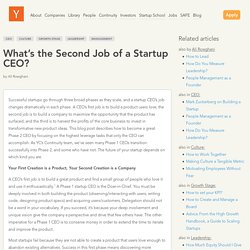 A CEO’s first job is to build a product users love; the second job is to build a company to maximize the opportunity that the product has surfaced; and the third is to harvest the profits of the core business to invest in transformative new product ideas. This blog post describes how to become a great Phase 2 CEO by focusing on the highest leverage tasks that only the CEO can accomplish. As YC’s Continuity team, we’ve seen many Phase 1 CEOs transition successfully into Phase 2, and some who have not. The future of your startup depends on which kind you are. Growth and Burn Rates at $1m ARR for 20+ Fast Growing SaaS Companies. Should Startups Care About Profitability? – Both Sides of the Table. There's only a few ways to scale user growth, and here's the list. Scaling growth is hard – there’s only a few ways to do itWhen you study the most successful mobile/web products, you start to see a pattern on how they grow. 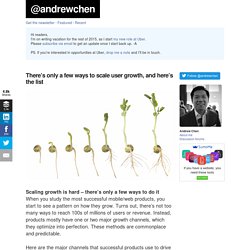 Turns out, there’s not too many ways to reach 100s of millions of users or revenue. Instead, products mostly have one or two major growth channels, which they optimize into perfection. These methods are commonplace and predictable. Here are the major channels that successful products use to drive traction – think of them as the moonshots. Paid acquisition.

These channels work and scale, because of two reasons: They’re feedback loops. It might seem like it’s best to crack one of these channels right away, and then ride then into glory. New products often only have months, or a year, to live, so these strategies are often not a real option. High-risk, high-reward Attacking one of these scalable channels is high risk but also high reward. This essay by Paul Graham gives us a clue, as he writes about Startups = Growth: How to Make Your Startup Go Viral The Pinterest Way. On Thanksgiving, Pinterest’s co-founder Ben Silbermann sent an email to his entire user base saying thanks. 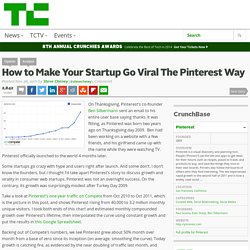 It was fitting, as Pinterest was born two years ago on Thanksgiving day 2009. Ben had been working on a website with a few friends, and his girlfriend came up with the name while they were watching TV. Pinterest officially launched to the world 4 months later. Some startups go crazy with hype and users right after launch. And some don’t. Take a look at Pinterest’s one-year traffic on Compete from Oct 2010 to Oct 2011, which is the picture in this post, and shows Pinterest rising from 40,000 to 3.2 million monthly unique visitors. Backing out of Compete’s numbers, we see Pinterest grew about 50% month over month from a base of zero since its inception (on average, smoothing the curve). Note these numbers are approximations and also do not count the significant traffic the service sees from mobile (Pinterest’s app currently takes the #6 social spot in the iTunes store).

Growth - Brian K Balfour · Traction vs Growth. Traction The traction phrase is where more startups are. 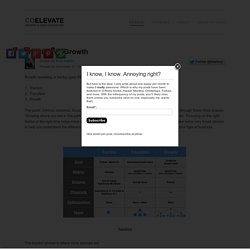 GoalThe one and only goal should be to find product-market fit among some audience segment. Part of this is understanding how large that audience segment is to make sure you can build a compelling business. MetricPlain and simple your eye should be on retention. If your product does not retain users, there is no point in growing the top of the funnel. VolumeThe primary goal is to just turn on the faucet and get a steady/consistent stream of users coming in the front door. In addition, your CPA will likely be greater than LTV. ChannelsTry a few to find that steady stream, but once you find one that provides that stream focus in. OptimizationFocus on large macro optimizations. TeamYou should have one person leading growth (probably a founder) who is thinking about it 80%+ of their time. Transition The transition phase is like the awkward teenage years. VolumeNow is the time to start turning up the faucet. Growth Lets do this!