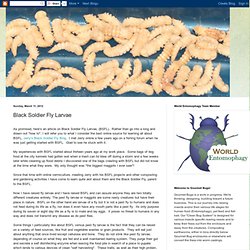 Rather than go into a long and drawn out "how to", I will refer you to what I consider the best online source for learning all about BSFL, Jerry's Black Soldier Fly Blog. I met Jerry online a few years ago on a fishing forum when he was just getting started with BSFL. Glad to see he stuck with it. My experiences with BSFL started about thirteen years ago at my work place. Some bags of dog food at the city kennels had gotten wet when a trash can lid blew off during a storm and a few weeks later while cleaning up flood debris I discovered one of the bags crawling with BSFL but did not know at the time what they were. Since that time with online vermiculture, meeting Jerry with his BSFL projects and other composting and gardening activities I have come to learn quite alot about them and the Black Soldier Fly, parent to the BSFL. Kind of looks like a really short boat haha! That's the drawback to raising BSFL. The Potential of the Black Soldier Fly - Botany Bay Farm.

Www.cals.ncsu.edu/waste_mgt/smithfield_projects/phase3report06/pdfs/B.10.pdf. Www.insectscience.org/10.202/i1536-2442-10-202.pdf. Featured Creatures. Founded in 1996, Featured Creatures provides in-depth profiles of insects, nematodes, arachnids and other organisms. The site is a cooperative venture of the University of Florida's Entomology and Nematology Department and the Florida Department of Agriculture and Consumer Services' Division of Plant Industry . 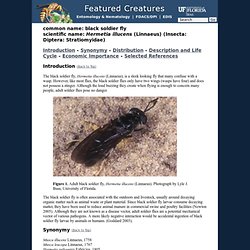 However, like most flies, the black soldier flies only have two wings (wasps have four) and does not possess a stinger. Although the loud buzzing they create when flying is enough to concern many people, adult soldier flies pose no danger. Figure 1. The black soldier fly is often associated with the outdoors and livestock, usually around decaying organic matter such as animal waste or plant material. Synonymy (Back to Top) List generated from (ITIS 2009) Distribution (Back to Top) The family Stratiomyidae comprises 260 known species in North America (Triplehorn 2005).

Description and Life Cycle (Back to Top) Figure 2. Figure 3. Figure 4. Hermetia illucens. The black soldier fly, or Hermetia illucens is a common and widespread fly of the family Stratiomyidae, whose larvae are common detritivores in compost heaps. 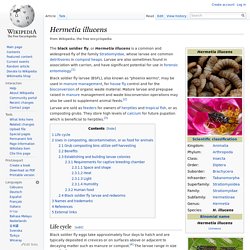 Larvae are also sometimes found in association with carrion, and have significant potential for use in forensic entomology.[1] Black soldier fly larvae (BSFL), also known as "phoenix worms", may be used in manure management, for house fly control and for the bioconversion of organic waste material. Mature larvae and prepupae raised in manure management and waste bioconversion operations may also be used to supplement animal feeds.[2] Larvae are sold as feeders for owners of herptiles and tropical fish, or as composting grubs. They store high levels of calcium for future pupation which is beneficial to herptiles.[3] No está disponible. Black Soldier Fly Blog. 'Grubby' Research Promises Environmental, Economic Benefits. Mar. 22, 2005 — STEPHENVILLE – Jeff Tomberlin's research could lend a whole new meaning to the phrase "grub for a living. 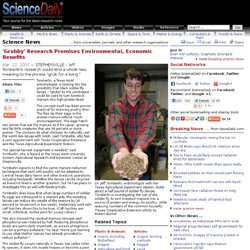 " Tomberlin, a Texas A&M entomologist, is looking into the possibility that black soldier fly larvae – "grubs" to the uninitiated – could be used to turn livestock manure into high-protein feed. The concept itself has been proven practical for reducing poultry litter: The flies lay their eggs in the animal manure without much encouragement. The eggs hatch into larvae that eat the manure as if it's caviar, growing into fat little creatures that are 40 percent or more protein.

The chickens do what chickens do naturally, eat the worm-like larvae with relish, said Tomberlin, who has a joint appointment with Texas Cooperative Extension and the Texas Agricultural Experiment Station. "No special harvest equipment is needed," said Tomberlin, who is based at the Texas A&M University System Agricultural Research and Extension Center at Stephenville. Bioconversion of Food Waste: Black Soldier Fly. Bio-Conversion of Putrescent Waste Black Solider fly: A Beneficial Arthropod After seven years of research, ESR developed and patented a unique bioconversion process that effects a 95% reduction in the weight and volume of food waste within a matter of just a few hours. 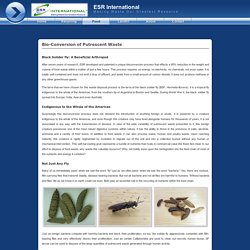 This process requires no energy, no electricity, no chemicals, not even water. It is totally self-contained and does not emit a drop of effluent, and aside from a small amount of carbon dioxide, it does not produce methane or any other greenhouse gases. The larva that we have chosen for this waste disposal process is the larva of the black soldier fly (BSF, Hermetia illucens). Indigenous to the Whole of the Americas Surprisingly this bioconversion process does not demand the introduction of anything foreign or exotic. BSF Farming Home - Black Soldier Fly Farming.