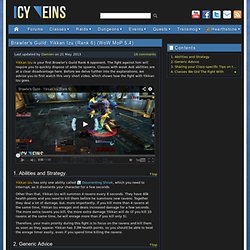 The fight against him will require you to quickly dispose of adds he spawns. Classes with weak AoE abilities are at a clear disadvantage here. Before we delve further into the explanations, we advise you to first watch this very short video, which shows how the fight with Yikkan Izu goes. Top 20 Battlepets pvp battle proven updated - Forums. Wild Pet Levels by Zone sorted by Level - Forums. Mists of Pandaria: Justice Point Rewards, News Round Up. Buff Foods (Mists of Pandaria) Walking Cane. 5.3 PVP Stat Guide - Forums. 5.4 PTR: Timeless Isle Zone Preview, BoA Epic Loot, Pets, and World Bosses. 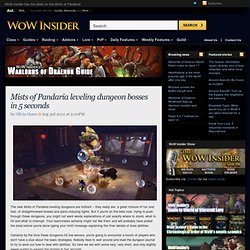 But if you're on the beta now, trying to push through these dungeons, you might not want wordy explanations of just exactly where to stand, what to hit and what to interrupt. Your teammates certainly might not like them and will probably have pulled the boss before you're done typing your ninth message explaining the finer details of boss abilities. Certainly by the time these dungeons hit live servers, you're going to encounter a bunch of players who don't have a clue about the basic strategies.

Nobody likes to wait around and read the dungeon journal to try to work out how to deal with abilities. So here we are with some very, very short, and only slightly sweet guides to explain the bosses in five seconds. Let's get started. Stormstout Brewery (levels 85 to 90) Ook Ook Avoid the barrels or jump onto them by clicking them. Which MoP Heroics Should you Run? The heroics at level 90 won’t be as punishing as the initial heroics for Cataclysm or Burning Crusade. 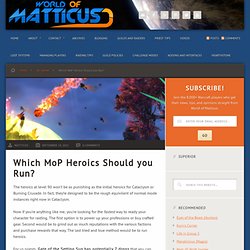 In fact, they’re designed to be the rough equivilent of normal mode instances right now in Cataclysm. Now if you’re anything like me, you’re looking for the fastest way to ready your character for raiding. The first option is to power up your professions or buy crafted gear. Second would be to grind out as much reputations with the various factions and purchase rewards that way. The last tried and true method would be to run heroics. For us priests, Gate of the Setting Sun has potentially 7 drops that you can use. Shaman healers will want to try their luck in Scholomance and Temple of the Jade Serpent. Pickings for druid and monk healers are slim.

Paladin healing plate just seems to be all over the place. Each dungeon has a notable quest or two attached to it. Below I’ve compiled and organized a list with relevant healing gear drops from heroics. Gate of the Setting Sun Mogu’shan Palace. WoW Insider's Guide to Mists of Pandaria. The Golden Lotus: 5.3 Reputation Guide and 5.4 Changes. The WoW is in The Details. New raid team development website needs users and feedback.

If you're a raid leader looking for better ways to manage your team roster, Cosine (@mashiox) may have a solution for you: the new website Whozawhat. 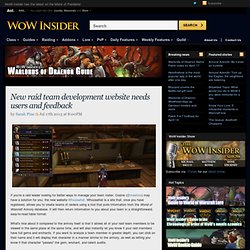 Whozawhat is a site that, once you have registered, allows you to create teams of raiders using a tool that pulls information from the World of Warcraft Armory database. It will then return information to you about your team in a straightforward, easy-to-read table format. What's nice about it compared to the armory itself is that it allows all of your raid team members to be viewed in the same place at the same time, and will also instantly let you know if your raid members have full gems and enchants. If you want to analyze a team member in greater depth, you can click on their name and it will display that character in a manner similar to the armory, as well as letting you know if that character "passes" the gem, enchant, and talent audits. Filed under: Analysis / Opinion, Raiding, Raid Guides. 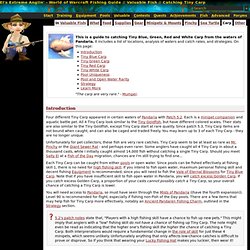 Each is a minipet companion and aquatic battle pet. All 4 Tiny Carp look similar to the Tiny Goldfish, but have different colored scales. Their stats are also similar to the Tiny Goldfish, except Tiny Carp start at rare quality. Since patch 5.3, Tiny Carp items are not bound when caught, and can also be caged and traded freely. Unfortunately for pet collectors, these fish are very rare catches. Each Tiny Carp can be caught from either pools or open water. You will need access to Pandaria, so must have seen through the Mists of Pandaria ((have the fourth expansion)). 5.2's patch notes state that, "Players with a high fishing skill have a chance to fish up new pets.

" Tiny Blue Carp Tiny Blue Carp are caught from: Catches from Crowded Redbelly Mandarin are surprising, since these pools only occur as part of the Fields of Niuzao Fish of the Day migration... in Townlong Steppes. Jade Lungfish.