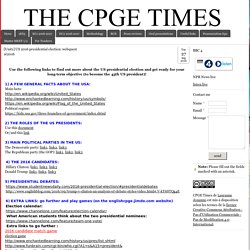 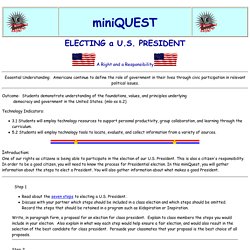 PRESIDENT A Right and a Responsibility. How does the US presidential election work and which swing states will determine whether Donald Trump or Hillary Clinton will win? Besançon Portail Langues - US elections. The United States Presidential Election: created with Zunal WebQuest Maker. "The Road to the White House" webquest.

Introduction Every four years in the United States the citizens of this country go through the process of deciding who our next leader is going to be. 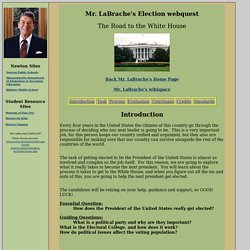 This is a very important job, for this person keeps our country unified and organized, but they also are responsible for making sure that our country can survive alongside the rest of the countries of the world. The Best Sites To Learn About The 2016 U.S. Presidential Elections. Check out my two student interactives for ELLs on the Presidential election! 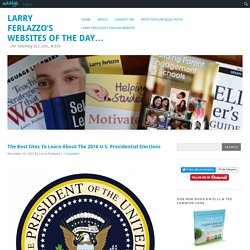 Nine Ways to Teach Election 2016 in the E.L.L. Classroom is the headline of my latest post for The New York Times Learning Network. I thought it was time to create this kind of “Best” list. You might also be interested in: The Best Resources For Learning About The 2012 U.S. The elections in America: Activities to print - Worksheets - Cartoons - Games to print - Interactive activities - Interactive games - Lesson plans - Listening - Pictures - Songs - Videos - Vocabulary - Webquests - Caucuses and Primaries - Election 2008 - US ELECTIONS in 2016. Trump website touts bipartisan support for gun policy he opposes - 7 October 2016 "Second amendment policy platform details wide support for expanded background checks on gun sales – a measure Trump and the NRA are against. 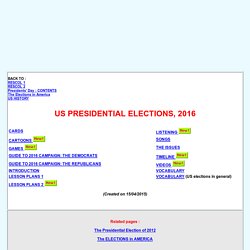