Weird laws that could get you in trouble overseas. ONE of the joys of travelling overseas is discovering the incredible cultural differences between there and home. 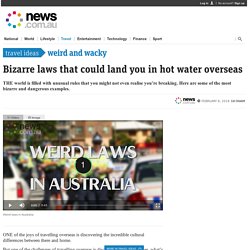 But one of the challenges of travelling overseas is discovering that sometimes, what’s perfectly legal at home could be a massive no-no somewhere else. Australia has some pretty weird laws of our own, for sure, but there are plenty more to be found beyond our borders. Classmill - Pre-Intermediate- Films and books. A brief history of graffiti - Kelly Wall. Studying graffiti can allow you to become conscious of what it means to make your mark over time. 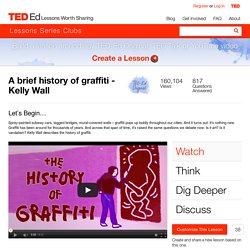 Graffiti as an art form presents an unusual historical domain because we are left with questions about who made the mark, how and why? Graffiti is unlike the typical primary and secondary sources used by historians because authorship, messages and audience are less known to the reader -- we, as historians, have to reconstruct those moments. This kind of historical reconstruction presents an interesting space for us to understand how and for whom historical knowledge is constructed, thus enhancing a focus on historical consciousness and how knowledge becomes 'known' to others.

Graffiti presents a view of past from the perspective of rare and lesser known, every day people. To learn more about graffiti in ancient Rome you can click here. Stunning Work Of Art Or Photo? Ray Villafane Transforms World's Largest Pumpkins Into Spooky Masterpieces. With Halloween just around the corner, the frenzy to carve out the spookiest pumpkin has begun in earnest, all over the country. 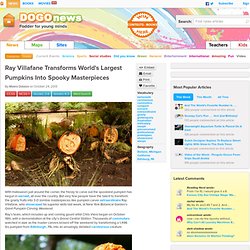 But very few people have the talent to transform the gnarly fruits into 3-D zombie masterpieces like pumpkin carver extraordinaire Ray Villafane, who showcased his superior skills last week, at New York Botanical Garden's Giant Pumpkin Carving Weekend. Ray's team, which includes up and coming gourd artist Chris Viera began on October 18th, with a demonstration at the city's Grand Central Station. HISTORY OF HOW THE JACK O' LANTERN CAME TO BE!

People have been making jack o'lanterns at Halloween for ages and ages. 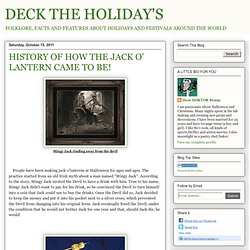 The practice started from an old Irish myth about a man named "Stingy Jack". According to the story, Stingy Jack invited the Devil to have a drink with him. True to his name, Stingy Jack didn't want to pay for his drink, so he convinced the Devil to turn himself into a coin that Jack could use to buy the drinks. Once the Devil did so, Jack decided to keep the money and put it into his pocket next to a silver cross, which prevented the Devil from changing into his original form.

Jack eventually freed the Devil, under the condition that he would not bother Jack for one year and that, should Jack die, he would not claim his soul. What Would Life Be Without Artists And Musicians? Ever wondered what life would be like if we did not have artists or musicians? There would be no art galleries to stroll into on slow summer days or concerts to look forward to, on hot summer nights. Video Of The Week - Feathers Fly High On International Pillow Fight Day.

By Meera Dolasia on April 8, 2013 CCSSGrades: K-3Word Search On Saturday April 6th, thousands of adults and children all over the world got together in predesignated locations in their respective cities with one purpose in mind - To have a good old-fashioned pillow fight with total strangers! 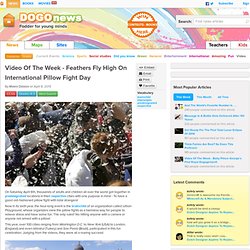 23rd Makeover Of Sweden's Ice Hotel Is Fabulous And Freezing! Most hotels are lucky if they go through one or two renovations during their lifetime. 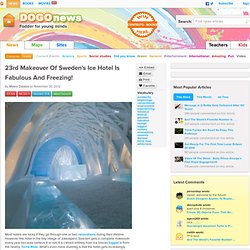 However this hotel in the tiny village of Jukkasjarvi, Sweden gets a complete makeover every year because believe it or not, it is carved entirely from Ice blocks lugged in from the nearby Torne River. What's even more stunning is that the hotel gets increasingly fabulous each year! Now in its 23rd year, the idea of building a frozen hotel came about quite accidently, after a local tourist company trying attract visitors during the severe winter months, hosted an art exhibition in a specially built igloo atop the frozen Torne River. While the 60sq.ft. structure was a huge success attracting many day visitors, it was not until a group of brave souls arrived with reindeer hides and sleeping bags and announced their intention to spend the night inside the igloo that the villagers had an 'aha' moment! Bolivia's New Jazz Sensation Is Just Seven Years Old And Blind. By Meera Dolasia on October 17, 2012 CCSSNCSS-10Word Search Jose Andre Montano Baina is taking the Bolivian and the world music scene by storm. 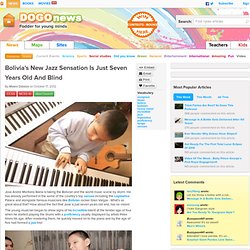 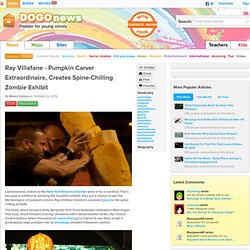 That's because in addition to admiring the beautiful exhibits, they got a chance to see the Michelangelo of pumpkin carvers, Ray Villafane transform oversized gourds into spine-chilling exhibits. The team, which included Andy Bergholtz from Food Network's Halloween Wars began their busy 'Giant Pumpkin Carving' weekend with a demonstration at the city's Grand Central Station, where thousands of commuters got a chance to see them sculpt a grotesquely large pumpkin into an amazingly detailed Halloween zombie. They then moved their efforts to the garden, where they continued their scary creations.