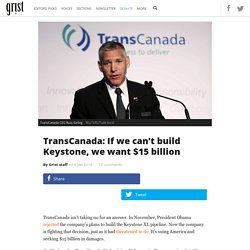 In November, President Obama rejected the company’s plans to build the Keystone XL pipeline. Now the company is fighting that decision, just as it had threatened to do: It’s suing America and seeking $15 billion in damages. On Wednesday, TransCanada filed suit in a U.S. court in Texas, arguing that Obama didn’t have constitutional authority to deny a permit for the pipeline. It also announced its intention to file a claim under the North American Free Trade Agreement, seeking monetary compensation. As The Wall Street Journal explains, “The company, which has spent $3.1 billion on the project already including on pipe and payments to landowners, said the $15 billion damage claim includes compensation for foregone tolls and other profit it otherwise would have earned.”

Of course, oil prices are so low today that it doesn’t make much financial sense to mine the Alberta tar sands anymore. Trade experts say TransCanada’s NAFTA claim is a long shot. No, Obama did not veto the Keystone XL pipeline. Normal people, who don’t follow every torturous twist and turn in the never-ending Keystone XL saga, would be forgiven for misunderstanding Tuesday’s news when they saw “Obama” and “veto” and “Keystone” in the headlines. 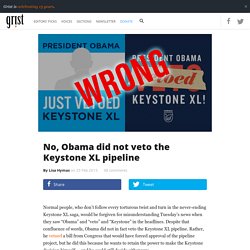 Despite that confluence of words, Obama did not in fact veto the Keystone XL pipeline. Rather, he vetoed a bill from Congress that would have forced approval of the pipeline project, but he did this because he wants to retain the power to make the Keystone decision himself — and he could still decide either way. The people who should understand this, and who should be particularly conscientious about helping other people understand this, are green group activists fighting the pipeline — like, say, the Natural Resources Defense Council and Al Gore’s Climate Reality Project. 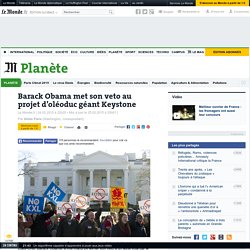 Obama Vetoes Keystone XL Bill, The Third Veto Of His Presidency. WASHINGTON -- President Barack Obama formally vetoed legislation authorizing the construction of the Keystone XL pipeline on Tuesday, the latest development in what has become an ongoing standoff between him and congressional Republicans over approval of the controversial pipeline. 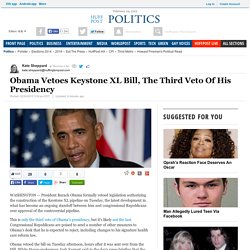 This is only the third veto of Obama's presidency, but it's likely not the last. Congressional Republicans are poised to send a number of other measures to Obama's desk that he is expected to reject, including changes to his signature health care reform law. Obama vetoed the bill on Tuesday afternoon, hours after it was sent over from the Hill. White House spokesman Josh Earnest said in the day's press briefing that the president planned to veto it "without any drama or fanfare or delay.

" "The Presidential power to veto legislation is one I take seriously," Obama wrote in a veto message he sent back to the Senate. Congress will soon approve Keystone, say Republicans. The new Republican Senate leadership seems to be holding true to its word: Approval for the Keystone XL pipeline will top the 2015 legislative agenda. 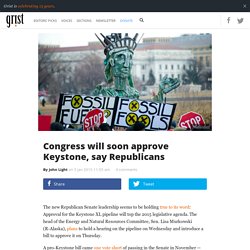 The head of the Energy and Natural Resources Committee, Sen. Lisa Murkowski (R-Alaska), plans to hold a hearing on the pipeline on Wednesday and introduce a bill to approve it on Thursday. A pro-Keystone bill came one vote short of passing in the Senate in November — and that was back when Democrats were still in control. This time, Republicans say, newly elected senators such as Shelley Moore Capito (R-W.Va.) and Joni Ernst (R-Iowa) will ensure that there are at least 60 votes, enough to overcome the threat of a filibuster and pass the legislation. President Obama: Veto the Keystone XL Pipeline. The Keystone XL Pipeline would accelerate climate change and put the environment at risk, but Republican Congressional leaders are pledging to send legislation approving the project to the President’s desk in the next Congress. 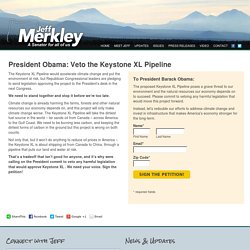 We need to stand together and stop it before we’re too late. Climate change is already harming the farms, forests and other natural resources our economy depends on, and this project will only make climate change worse. Lame-duck Democratic senators stop the Keystone bill. Will Obama follow their lead? A Senate bill to force approval of the Keystone XL pipeline failed on Tuesday night, coming up one vote short of the 60 needed to overcome a filibuster threat. 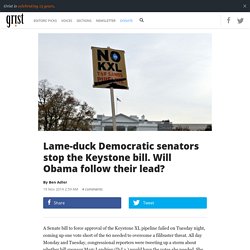 All day Monday and Tuesday, congressional reporters were tweeting up a storm about whether bill sponsor Mary Landrieu (D-La.) would have the votes she needed. She ended up with only 59. All 45 Senate Republicans voted for the bill, even supposed climate hawk Susan Collins (R-Maine). So did a mostly predictable group of moderate Democrats from red, purple, and fossil fuel–producing states: Mark Begich (Alaska), Michael Bennet (Colo.), Bob Casey (Penn.), Tom Carper (Del.), Joe Donnelly (Ind.), Kay Hagan (N.C.), Heidi Heitkamp (N.D.), Joe Manchin (W.Va.), Claire McCaskill (Mo.), Mark Pryor (Ark.), Jon Tester (Mont.), John Walsh (Mont.), and Mark Warner (Va.). The only surprising vote among them is Carper, who is from a staunchly Democratic state. The top 3 flaws with the State Dept.’s Keystone study.

When the State Department issued its environmental impact statement on the proposed Keystone XL pipeline two weeks ago, the media’s main takeaway was that State had found the project would not significantly increase greenhouse gas emissions. 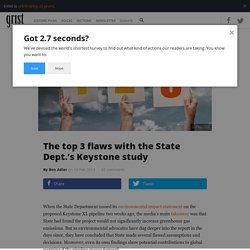 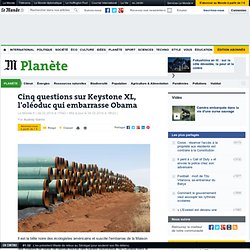 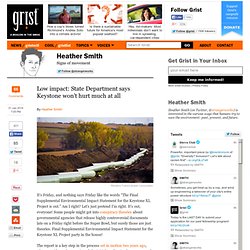 Am I right? Let’s just pretend I’m right. It’s out, everyone! Some people might get into conspiracy theories about governmental agencies that release highly controversial documents late on a Friday right before the Super Bowl, but surely those are just theories. Bummer for anti-Keystoners: Report finds no conflict of interest, despite obvious conflicts of interest. Environmental Resources Management, the consulting firm hired by the State Department to review the potential environmental effects of the Keystone XL pipeline, did all sorts of dodgy and deceptive stuff, but none of it amounted to serious rule breaking — at least according to the State Department’s inspector general.

The Office of Inspector General today published a report that found ERM did not violate the State Department’s conflict-of-interest rules as it bid for the Keystone contract and wrote its study. Climate activists and environmentalists had requested the investigation by the inspector general, and now they’re none too pleased with the results. Earth's Future in the Friday News Dump. White House march revives Keystone XL protest movement. State Department to Delay Keystone XL Pipeline Decision Until After November. By Ryan Koronowski via ThinkProgress The State Department will “extend the government comment period on the Keystone XL pipeline, likely postponing a final decision on the controversial project until after the Nov. 4 midterm elections,” Reuters reported on Friday afternoon.

The organization credited the information to a 1:30 call with Congressional staff. The decision of whether or not to approve the northern leg of TransCanada’s pipeline, connecting the tar sands of Alberta to oil refineries and export facilities in Texas, will enter its sixth year in September. State made the decision to give more time for 8 federal agencies to weigh in on the project. This would move the end of the review process, originally scheduled to end in May, to a date “likely” after the 2014 midterm elections, according to the Wall Street Journal. Obama delays Keystone decision — again.

Stop me if you think that you’ve heard this one before: The Obama administration is delaying a decision on whether to approve the Keystone XL pipeline. But this is different from all those past delays. Le projet d'oléoduc Keystone XL jugé suffisamment peu polluant. Keystone pipeline review looming, likely to show little climate risk. Crude awakening: As Keystone opens in Texas, neighbors fight to protect their water. Wednesday at 10:45 a.m., Keystone XL South was supposed to begin piping tar sands crude from Cushing, Okla. to refineries in Texas. That’s what the pipeline’s builder, Transcanada, had announced. The pumps that keep crude moving through the pipeline were running last Thursday, as TransCanada performed last-minute tests of the system.

But on Friday they went silent, according to observers in the area, and so far it looks like they haven’t started up since. “Last week we heard info from two different sources that they had a major leak,” says Kathy DaSilva, of Nacogdoches, Texas, who has been involved in the fight around KXL South for the last three years. “But we have not been able to verify or find where the leak was.” Leaks are a big concern for DaSilva. But: It’s a big region.

Fixing old water and gas pipelines would create far more jobs than building Keystone XL. In the coming months, President Obama will decide whether to approve the permit for the Keystone XL pipeline, which would transport crude tar-sands oil from Alberta to the Gulf of Mexico. We know that the pipeline would greatly aggravate climate change, allowing massive amounts of the world’s dirtiest oil to be extracted and later burned. The payoff, say supporters such as the U.S. Chamber of Commerce, is a job boom in construction industries, which are currently suffering from high unemployment. Earlier this month, Chamber of Commerce CEO Tom Donohue called on the president “to put American jobs before special interest politics.” Why exploding trains are the new Keystone XL. Back in the olden days of 2011, when America was young and LMFAO’s “Party Rock Anthem” was a song that not everyone had gotten sick of yet, one of the most compelling criticisms leveled against the Keystone XL pipeline protesters went like this: There is oil in the Alberta tar sands.

Pretty cheap stuff – about $30 less a barrel than what you can buy overseas. There are people in the U.S., which is not far from this oil, who will pay money for it so they can drive to their jobs or the grocery store or wherever else they feel like going, probably while listening to “Party Rock Anthem.” And for this reason, even if Keystone XL or some other pipeline isn’t built, people will figure out how to move the oil anyway, because there is a market for it. Did this happen? But the delays in building Keystone also led to a glut in crude oil that energy companies, in their hubris, had expected to be able to load into a pipeline, and couldn’t.

Layout - Embargo_Report.pdf. Keystone XL could crush endangered fox cubs in their own dens. Contrary to popular belief, environmentalists aren’t totally unconnected with reality. We realize, for instance, that we can get people up in arms about cute endangered species, but that no one cares if the Keystone XL pipeline is going to affect the American burying beetle. (Even if they are weird and bright orange and the largest beetle on the continent to collect dead birds, roll them up, and bury them next to their underground beetle nests.) Train or Pipeline, the Answer is the Same. 7 adorable animals imperiled by the Keystone XL pipeline. Obama points out economic downsides of Keystone XL. Obama OKs pipeline that will help Canada’s tar-sands industry. Keystone XL May Actually Raise American Gas Prices. Keystone XL could hike gas prices as much as 40 cents a gallon. Government doesn’t know exact route of Keystone XL.

Le sénat américain bloque la construction d'un oléoduc géant. House votes to take Keystone decision out of Obama’s hands. Obama may delay Keystone decision until 2014. GOP to Obama on Keystone: Don’t think about climate. Obama: I will only OK Keystone if it won’t significantly increase CO2 emissions. The significance of Obama’s cryptic Keystone comments. Canada’s government is spending millions to get you to like the Keystone pipeline.