6 things Bernie Sanders would do to crack down on fracking, even if Congress doesn’t go along. Bernie Sanders wants to halt fracking not just on public land but on private land too. 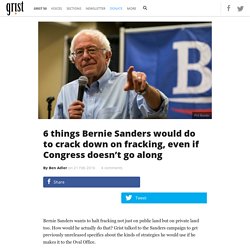 How would he actually do that? Grist talked to the Sanders campaign to get previously unreleased specifics about the kinds of strategies he would use if he makes it to the Oval Office. How much fracking is happening in the Gulf of Mexico? We don’t know nearly enough about the fracking that’s already going on in the U.S. — that’s the point of two lawsuits filed this past week by environmental advocates against the federal government. 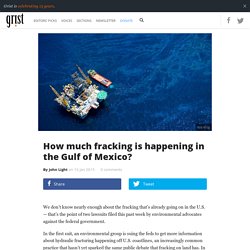 In the first suit, an environmental group is suing the feds to get more information about hydraulic fracturing happening off U.S. coastlines, an increasingly common practice that hasn’t yet sparked the same public debate that fracking on land has. In the second, a coalition of nine groups is suing the EPA to force companies to release information about toxic chemicals used in the fracking process. Gaz de schiste : premier test pour Ségolène Royal. The dictionary finally admits fracking is here to stay. Kids, do you remember the dictionary? 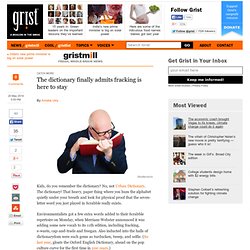 No, not Urban Dictionary. The dictionary! That heavy, paper thing where you hum the alphabet quietly under your breath and look for physical proof that the seven-letter word you just played in Scrabble really exists. Environmentalists got a few extra words added to their Scrabble repertoire on Monday, when Merriam-Webster announced it was adding some new vocab to its 11th edition, including fracking, e-waste, cap-and-trade and freegan. L.A. and California lawmakers move to impose fracking moratoriums. Leaders in Los Angeles seem to have been paying attention to Hollywood. 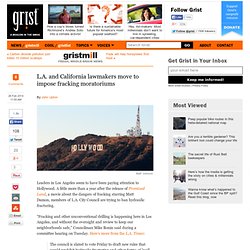 A little more than a year after the release of Promised Land, a movie about the dangers of fracking starring Matt Damon, members of L.A. City Council are trying to ban hydraulic fracturing.

Fracking chemicals may make oil extra explosive. Have you noticed the recent spate of oil-hauling trains bursting into flames? 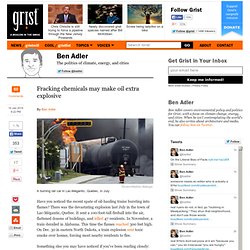 There was the devastating explosion last July in the town of Lac-Mégantic, Quebec. It sent a 100-foot-tall fireball into the air, flattened dozens of buildings, and killed 47 residents. In November, a train derailed in Alabama. This time the flames reached 300 feet high. On Dec. 30 in eastern North Dakota, a train explosion sent toxic smoke over homes, forcing most nearby residents to flee. L’OPECST rend son rapport sur la question du gaz de schiste 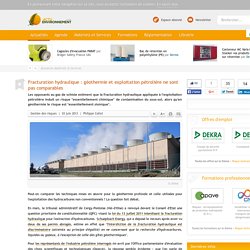 Word games are misleading the American public about fracking. Hydraulic fracturing, better known as fracking, and other drilling practices have unlocked previously inaccessible reserves of oil and gas across the United States and the world. 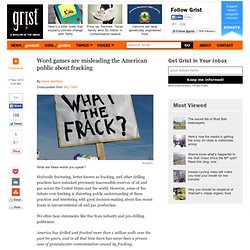 However, some of the debate over fracking is distorting public understanding of these practices and interfering with good decision-making about this recent boom in unconventional oil and gas production. We often hear statements like this from industry and pro-drilling politicians: America has drilled and fracked more than 1 million wells over the past 60 years, and in all that time there has never been a proven case of groundwater contamination caused by fracking. This statement, in some form or another, is repeated from the kitchen tables of ordinary citizens to the halls of Congress, as landmen use it to try to secure mineral rights from private landowners and legislators advocate for more drilling on millions of acres of public land.

Divine intervention? Pope opposes fracking. The worldwide leader of the Catholic Church, none other than the motherfracking pope himself, has come out in opposition to the worldwide scourge of hydraulic fracturing. 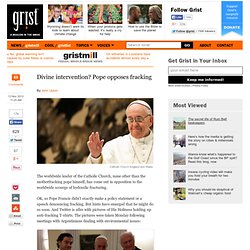 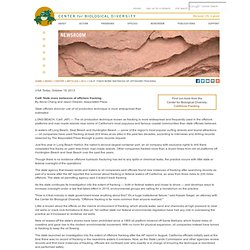 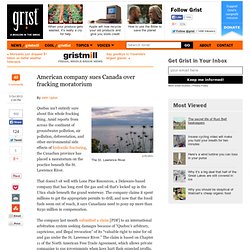 Amid reports from across the continent of groundwater pollution, air pollution, deforestation, and other environmental side effects of hydraulic fracturing, the Canadian province has placed a moratorium on the practice beneath the St. Lawrence River. Gaz de schiste : 1 milliard d’euros d’indemnités réclamés à la France. This video explains almost everything you want to know about fracking. Still trying to figure out what the big deal with fracking is? Hydraulic fracturing — fracking for short — is the controversial process that has fueled the new energy boom in the U.S., making it possible to tap reserves that had previously been too difficult and expensive to extract. It works by pumping millions of gallons of pressurized water, with sand and a cocktail of chemicals, into rock formations to create tiny cracks and release trapped oil and gas. It’s been tied to earthquakes and has led to a number of lawsuits, including one that resulted in a settlement agreement that barred a 7-year-old from ever talking about it.

At the same time, fracking has also created a glut of cheap energy and is helping to push coal, and coal-fired power plants, out of the market. Fracturation hydraulique. Un article de Wikipédia, l'encyclopédie libre. Fracking FAQ: The science and technology behind the natural gas boom. “Fracking”: It sounds more like a comic-book exclamation (kapow! Boom! Frack!) Than a controversial method for extracting natural gas and oil from rock deep underground. By turns demonized as a catastrophic environmental threat and glorified as a therapy for our foreign oil addiction, fracking has become a flashpoint in our national energy policy.

First developed in the 1940s, fracking — literally, “hydraulic fracturing,” or “smashing rock open with lots of water” — only began to boom around 2005, but today, it’s used in nine out of every 10 natural gas wells in the U.S. Gaz de schiste: le Conseil constitutionnel refuse d'entendre les opposants. Mémoire intervention QPC (V6 CLE) Offshore fracking in California: What could go wrong? Exciting new update in the chronicles of America’s domestic oil-and-gas boom: Not only is offshore fracking a thing, but it’s been happening off the coast of California for a good 15 years now, in the same sensitive marine environments where new oil leases have been banned since a disastrous 1969 spill. If that’s news to you, you’re not alone — the California Coastal Commission was unaware, until recently, that the seafloor was being fracked.

Because these drilling operations happen more than three miles off the coast, they’re under federal jurisdiction, but the state has the power to reject federal permits if water quality is endangered. The Associated Press has the story: Federal regulators thus far have exempted the chemical fluids used in offshore fracking from the nation’s clean water laws, allowing companies to release fracking fluid into the sea without filing a separate environmental impact report or statement looking at the possible effects.

EPA tells Ohio to stop keeping fracking secrets from first responders. Ohio firefighters, cops, and local officials might soon learn a little bit more about the poisons that frackers are storing and injecting into the ground beneath their feet. The U.S. EPA told the state that a 12-year-old Ohio law that lets the fracking industry conceal information from emergency-management officials and first responders violates federal law. From The Columbus Dispatch: The state law, passed in 2001, requires that drilling companies share information about hazardous chemicals only with the Ohio Department of Natural Resources, which is supposed to keep the information available for local officials.But federal EPA officials take a different view.