Shift from West to East

An animated look at how Asia has changed over 50 years- Nikkei Asian Review. Asia has changed considerably since the Association of Southeast Asian Nations came together as a political bloc in August 1967. 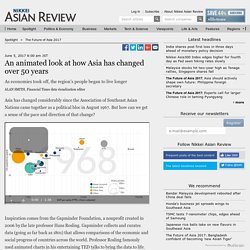 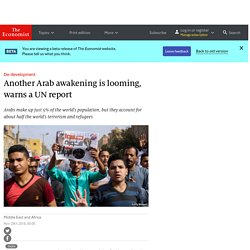 Only 16% of 18-29-year-olds voted in elections, it showed; just 2% registered for volunteer work. An apathetic generation, concluded the ministers, who returned to twiddling their thumbs. Weeks later, Egypt’s youth spilled onto the streets and toppled President Hosni Mubarak. The UN’s latest Arab Development Report, published on November 29th, shows that few lessons have been learnt. Five years on from the revolts that toppled four Arab leaders, regimes are ruthlessly tough on dissent, but much less attentive to its causes.

As states fail, youth identify more with their religion, sect or tribe than their country. Global Power Shift. A version of this article appeared in the Summer 2016 issue of strategy+business. 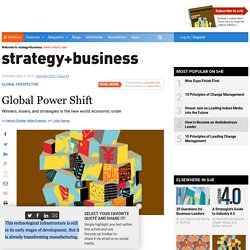 During the mid-2000s, when emerging markets were growing at breakneck speed, the cavernous gap separating industrial and developing economies began to close. This convergence took place against a backdrop of economic liberalization, built on the idea that the financial systems of all nations would dovetail. That period is now over. Emerging nations are no longer growing as rapidly as they were, particularly in comparison with developed economies; further, the fissures among different systems have become more evident. In PwC’s 19th Annual Global CEO Survey, only 35 percent of the corporate leaders who responded said they believe the world is moving toward greater economic union. Explicit cookie consent. 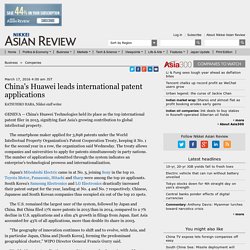 The US world order is a suit that no longer fits. Forget Sykes-Picot. It’s the Treaty of Sèvres That Explains the Modern Middle East. Ninety-five years ago today, European diplomats gathered at a porcelain factory in the Paris suburb of Sèvres and signed a treaty to remake the Middle East from the ashes of the Ottoman empire. 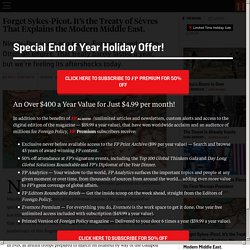 The plan collapsed so quickly we barely remember it anymore, but the short-lived Treaty of Sèvres, no less than the endlessly discussed Sykes-Picot agreement, had consequences that can still be seen today. We might do well to consider a few of them as the anniversary of this forgotten treaty quietly passes by. In 1915, as British troops prepared to march on Istanbul by way of the Gallipoli peninsula, the government in London printed silk handkerchiefs heralding the end of the Ottoman empire. Within a year of signing the Treaty of Sèvres, European powers began to suspect they had bitten off more than they could chew.

Trying not to choose. East Asia is the scene for an unprecedented experiment in international relations. 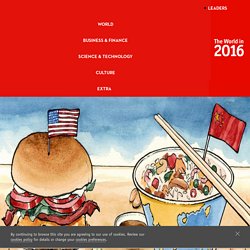 Never before have so many countries been so intertwined economically with one big power (China) while looking to another (America) as the ultimate guarantor of their security. So far the experiment has seemed a stunning success. For 40 years, America has not just kept the peace; it has enabled a continental economic boom. And the biggest beneficiary of that has been China. Yet that order is now fraying, as China chafes under what it sees as an American-led world order that is impeding its rise and its natural regional predominance.

India. China. Russia, Crimea and Ukraine. These Technologies Will Shift the Global Balance of Power in the Next 20 Years. Forget Sykes-Picot. It’s the Treaty of Sèvres That Explains the Modern Middle East. In 2025, the Center of the Global Economy Will Be Back Where it Was in 1 AD. Transcript James Manyika: The center of gravity of the global economy is actually shifting east and south to some extent. 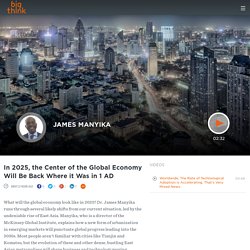 In fact what’s interesting about that is that if you actually tried to do a center of gravity analysis, you’ll actually find that the center of gravity of the global economy by 2025 will actually be somewhere in East Asia is where it will be. And what’s interesting about that is that that’s where it was in about year 1 A.D. So in fact in some ways it’s a return back to where the center of gravity used to be. So you’ve got that big geographic shift happening. UK move to join China-led bank a surprise even to Beijing. The American century will survive the rise of China.

How to Seize the Opportunities When Megatrends Collide. McDonald’s was one of the first Western companies to play an active role in the world’s emerging markets. 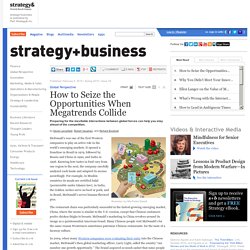 It opened a franchise in Brazil in 1979, followed by Russia and China in 1990, and India in 1996. Knowing how tastes in food vary from one region to the next, the company carefully analyzed each locale and adapted its menus accordingly. For example, in Muslim countries its meals are certified halal (permissible under Islamic law); in India, the Golden Arches serve no beef or pork; and in Brazil, McDonald’s serves banana-flavored pies. The restaurant chain was particularly successful in the fastest-growing emerging market, China, where the menu is similar to the U.S. version, except that Chinese customers prefer chicken thighs to breasts. McDonald’s marketing in China revolves around its image as a quintessential American brand. FT Web App. At least seven people were killed when a commuter train hit cars on a level crossing north of New York City on Tuesday evening, in what could be the worst passenger train crash in the US since 2009. 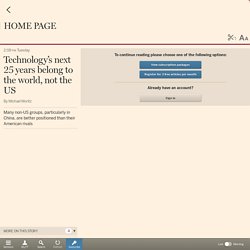 Metro-North said one of its trains hit a Jeep Cherokee vehicle at 6.30pm at the Commerce Street crossing in Valhalla, New York. Rob Astorino, chief executive of Westchester County, which covers Valhalla, said on Twitter from what he called the “horrific scene” that at least seven people had died and 10 had been injured. “Pray for the deceased,” he wrote. What really happened in Beijing: Putin, Obama, Xi — and the back story the media won’t tell you. By way of events on the foreign side, the past few weeks start to resemble some once-in-a-while event in the heavens when everyone is supposed to go out and watch as the sun, moon and stars align. 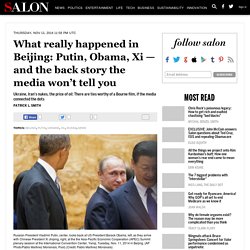 There are lots of things happening, and if we put them all together, the way Greek shepherds imagined constellations, a picture emerges. Time to draw the picture. September/October 2014. ID-157-Maharajh-Brundenius-Inclusive-innovation-social-and-sustainable-perspectives.pdf. Why have young people in Japan stopped having sex? Ai Aoyama is a sex and relationship counsellor who works out of her narrow three-storey home on a Tokyo back street. Her first name means "love" in Japanese, and is a keepsake from her earlier days as a professional dominatrix. Back then, about 15 years ago, she was Queen Ai, or Queen Love, and she did "all the usual things" like tying people up and dripping hot wax on their nipples. Her work today, she says, is far more challenging.

Aoyama, 52, is trying to cure what Japan's media calls sekkusu shinai shokogun, or "celibacy syndrome". Japan's under-40s appear to be losing interest in conventional relationships. The sign outside her building says "Clinic". David Grossman: Stop the Grindstone of Israeli-Palestinian Violence. JERUSALEM — Israelis and Palestinians are imprisoned in what seems increasingly like a hermetically sealed bubble. Over the years, inside this bubble, each side has evolved sophisticated justifications for every act it commits.

When Middle East Conflicts Become One. It’s amazing how much of the discussion of the Gaza war is based on the supposition that it is still 1979. It’s based on the supposition that the Israeli-Palestinian dispute is a self-contained struggle being run by the two parties most directly involved. It’s based on the supposition that the horror could be ended if only deft negotiators could achieve a “breakthrough” and a path toward a two-state agreement. But it is not 1979. People’s mental categories may be stuck in the past, but reality has moved on. The violence between Israel and Hamas, which controls Gaza, may look superficially like past campaigns, but the surrounding context is transformed. Iran’s Middle East Nightmare. The U.S. foreign policy community often demonstrates a stunning inability to understand its adversaries. This was the case, for example, with Russia in Ukraine, where the fall of a Russian proxy regime to pro-Western forces was hailed in DC as a major victory for Vladimir Putin because he managed to salvage three percent of the country in re-seizing Crimea.

That being said, few countries seem to baffle America’s foreign policy community more than the Islamic Republic of Iran. For some time now, countless U.S. and Western analysts have been claiming that the Syrian civil war and the associated rise in sectarianism in the Middle East is a major victory for Iran. This same puzzling logic is now being applied to the Iraq crisis. This is nonsensical. The Arab Spring, which Tehran first welcomed, has been by far Iran’s biggest nightmare. The Other June 4, 1989. Twenty-five years ago, two communist parties thousands of miles apart were faced with a similar dilemma: How to loosen state control of the economy while maintaining unquestioned political authority. On June 4, 1989, these two parties took sharply divergent paths. The New Danger in Benghazi. Africa’s Tech Edge. How the continent's many obstacles, from widespread poverty to failed states, allowed African entrepreneurs to beat the West at reinventing money for the mobile age.

Science, Technology and Medicine News Updates From Asia - AsianScientist_131003_Phil Baty_Power Shift From West To East In THE World Uni Rankings.PDF.