The Algorithmic Colonization of Africa. The second annual CyFyAfrica 2019, The Conference on Technology, Innovation, and Society [1] took place in Tangier, Morocco, 7 – 9 June 2019. 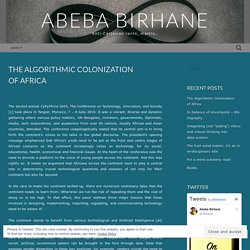 It was a vibrant, diverse and dynamic gathering where various policy makers, UN delegates, ministers, governments, diplomats, media, tech corporations, and academics from over 65 nations, mostly African and Asian countries, attended. The conference unapologetically stated that its central aim is to bring forth the continent’s voices to the table in the global discourse. The president’s opening message emphasised that Africa’s youth need to be put at the front and centre stages of African concerns as the continent increasingly relies on technology for its social, educational, health, economical and financial issues. Ignore the science fiction: AI isn’t out to get us. Every ten to 15 years there is a technology breakthrough that really changes what it means to be human. 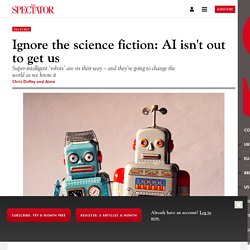 The internet, mobile phones, social media and, most recently, AI voice assistance: all of these amplify the human experience. And with each technological game-changer we go through much of the same series of questions and anxieties. You can stop worrying about artificial intelligence (for now) You would be forgiven for thinking that right now, in 2019, artificial intelligence actually exists. 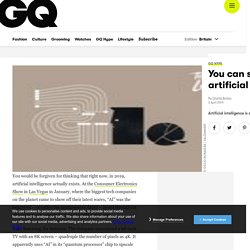 At the Consumer Electronics Show in Las Vegas in January, where the biggest tech companies on the planet came to show off their latest wares, “AI” was the buzzword – or rather the omnipresent drone – heard throughout almost 300,000 square metres of exhibition space. Take Samsung, for instance. The company announced a 98-inch TV with an 8K screen – quadruple the number of pixels as 4K. It apparently uses “AI” in its “quantum processor” chip to upscale content to that resolution. Or look at LG, which entitled its CES keynote “AI For An Even Better Life”. Security Isn't Enough. Silicon Valley Needs 'Abusability' Testing. 'The goal is to automate us': welcome to the age of surveillance capitalism. Advanced Artificial Intelligence Could Run The World Better Than Humans Ever Could. There are fears that tend to come up when people talk about futuristic artificial intelligence — say, one that could teach itself to learn and become more advanced than anything we humans might be able to comprehend. 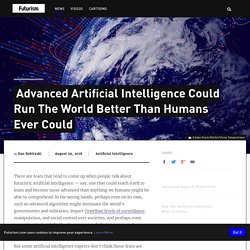 In the wrong hands, perhaps even on its own, such an advanced algorithm might dominate the world’s governments and militaries, impart Orwellian levels of surveillance, manipulation, and social control over societies, and perhaps even control entire battlefields of autonomous lethal weapons such as military drones. But some artificial intelligence experts don’t think those fears are well-founded. In fact, highly-advanced artificial intelligence could be better at managing the world than humans have been. These fears themselves are the real danger, because they may hold us back from making that potential a reality.

To Build Trust In Artificial Intelligence, IBM Wants Developers To Prove Their Algorithms Are Fair. We trust artificial intelligence algorithms with a lot of really important tasks. 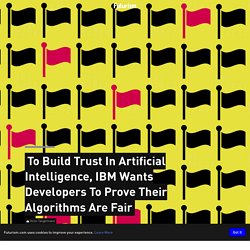 But they betray us all the time. Algorithmic bias can lead to over-policing in predominately black areas; the automated filters on social media flag activists while allowing hate groups to keep posting unchecked. EIU Microsoft Intelligent Economies AI's transformation of industries and society. 2018-3. Computers and robots are now learning to make decisions! 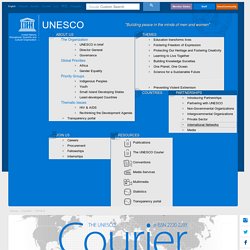 Of course, “deciding” is a big word for machines that have no consciousness and whose level of “reasoning” is not even as evolved as that of a frog. But the latest developments in artificial intelligence (AI) are enough to frighten some and to arouse the fantasies of others. Between myth and reality, where exactly does the current research stand in this technology that threatens to disrupt all others? In its Wide Angle section, the Courier attempts to untangle the various paths of inquiry and offers some terminological signposts to help uninitiated readers to find their way through the fascinating but scary world of AI. DeepMind Created a Test to Measure an AI’s Ability to Reason. GENERAL INTELLIGENCE. 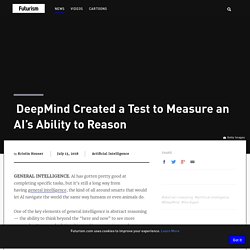 AI has gotten pretty good at completing specific tasks, but it’s still a long way from having general intelligence, the kind of all around smarts that would let AI navigate the world the same way humans or even animals do. One of the key elements of general intelligence is abstract reasoning — the ability to think beyond the “here and now” to see more nuanced patterns and relationships and to engage in complex thought. On Wednesday, researchers at DeepMind — a Google subsidiary focused on artificial intelligence — published a paper detailing their attempt to measure various AIs’ abstract reasoning capabilities, and to do so, they looked to the same tests we use to measure our own. HUMAN IQ. In humans, we measure abstract reasoning using fairly straightforward visual IQ tests.

How Frightened Should We Be of A.I.? Precisely how and when will our curiosity kill us? 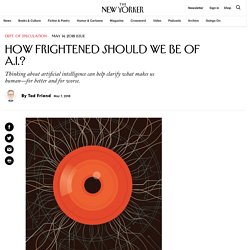 I bet you’re curious. A number of scientists and engineers fear that, once we build an artificial intelligence smarter than we are, a form of A.I. known as artificial general intelligence, doomsday may follow. Bill Gates and Tim Berners-Lee, the founder of the World Wide Web, recognize the promise of an A.G.I., a wish-granting genie rubbed up from our dreams, yet each has voiced grave concerns. Elon Musk warns against “summoning the demon,” envisaging “an immortal dictator from which we can never escape.” Stephen Hawking declared that an A.G.I. On Flipboard. The Guardian view on artificial intelligence: not a technological problem. The House of Lords report on the implications of artificial intelligence is a thoughtful document which grasps one rather important point: this is not only something that computers do. 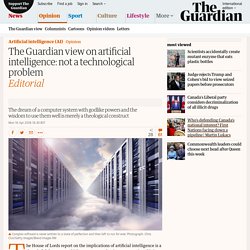 Machine learning is the more precise term for the technology that allows computers to recognise patterns in enormous datasets and act on them. But even machine learning doesn’t happen only inside computer networks, because these machines are constantly tended and guided by humans. You can’t say that Google’s intelligence resides either in its machines or in its people: it depends on both and emerges from their interplay. Complex software is never written to a state of perfection and then left to run for ever. It is constantly being tweaked, increasingly often as part of an arms race with other software or networks that are being used to outwit it. The question, then, is which forms of bias and which perspectives are desirable, and which we should guard against. What's hot in AI: Deep reinforcement learning. Life 3.0 by Max Tegmark review – we are ignoring the AI apocalypse.

Artificial intelligence will probably be the most important agent of change in the 21st century. 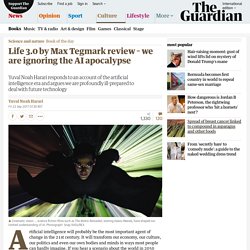 In the 21st century, AI will open up an even wider spectrum of possibilities. This choice is not a matter of engineering or science. Max Tegmark’s Life 3.0 tries to rectify the situation. Life 3.0 does a good job of clarifying basic terms and key debates, and in dispelling common myths. Separating Science Fact From Science Hype: How Far off Is the Singularity? The term “artificial intelligence” was only just coined about 60 years ago, but today, we have no shortage of experts pondering the future of AI. Chief amongst the topics considered is the technological singularity, a moment when machines reach a level of intelligence that exceeds that of humans. While currently confined to science fiction, the singularity no longer seems beyond the realm of possibility.

From larger tech companies like Google and IBM to dozens of smaller startups, some of the smartest people in the world are dedicated to advancing the fields of AI and robotics. Your Future Doctor May Not be Human. This Is the Rise of AI in Medicine. Diagnosing with “The Stethoscope of the 21st Century” A new kind of doctor has entered the exam room, but doesn’t have a name. In fact, these doctors don’t even have faces. Artificial intelligence has made its way into hospitals around the world. Google-ai-creates-its-own-offspring. The most exciting work in artificial intelligence (AI) is happening in the field of machine learning using a technique known as deep learning.

This process enables computers to learn by running massive amounts of data through a complex set of algorithms. The system is inspired by the biology of the human brain, and is called a neural network. Building these systems requires a team of scientists and engineers who painstakingly design the set of rules and methods necessary to achieve the desired result. With the current AI boom underway, experts with the skills required to create these systems are in short supply, with only an estimated 10,000 people worldwide proficient in the task.

On Flipboard. Google's AI made its own AI, and it's better than anything ever created by humans. The Google's Brain team of researchers has been hard at work studying artificial intelligence systems. Back in May they developed AutoML, an AI system that could in turn generate its own subsequent AIs. Their next big task was to benchmark these automatically generated AIs against more traditional human-made AIs. Researchers Have Created an AI System That Teaches Itself New Languages. Machine Learning Is Making it Difficult to Tell Humans and Computers Apart. Goodbye, CAPTCHAs? If you’ve ever been browsing the internet, spotted something interesting like a video or an article that you wanted to read, only to discover that before you can view it, the website asks you to prove that you’re human. You’re usually instructed to complete a simple task, such as typing out a word that’s hidden under a bunch of squiggly lines, or to correctly identify which image matches a certain description.

While such tasks can be annoying, the test is a necessary component of cybersecurity in the modern age; at least in terms of telling human users from bots. Google’s AI won the game Go by defying millennia of basic human instinct. Stunning AI Breakthrough Takes Us One Step Closer to the Singularity. Humanity's Sci-Fi Future: Are We Really Ready for Intelligent Robots? NEW YORK — From transporters and lightsabers to spaceships that can travel faster than the speed of light, futuristic devices that lie beyond humanity's grasp — for now, at least — are a staple of science fiction. And yet over time, people have steadily advanced the boundaries of what technology can do. For some, this raises concerns about whether we should be paying closer attention to sci-fi's cautionary tales about the hidden costs of relying too heavily on tech — particularly when it comes to robots and artificial intelligence (AI). As machines become ever more sophisticated and specialized, and perhaps even begin to think for themselves, what does that mean for the humans who engineer and depend on them?

We Just Created an Artificial Synapse That Can Learn Autonomously. Welcome to the Semantic Web - Chris Skinner's blog. Types of AI: From Reactive to Self-Aware [INFOGRAPHIC] The world in 2076: Machines outsmart us but we're still on top. The novelist who inspired Elon Musk.