Bitcoin is the worst investment of 2014. There was plenty of ugliness to be found in the markets this year. 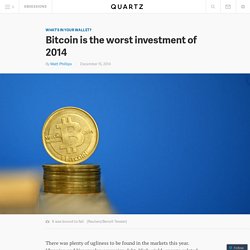 Ukranian and Venezuelan sovereign debt. High-yield, energy-related corporate bonds. Argentine pesos. Russian rubles. Greek stocks. But none of these investments has been as atrociously awful as bitcoin, the heavily hyped crypto-currency that stormed onto the financial scene in the last few years, threatening to disrupt the cornerstone of global finance that is fiat currency. It hasn’t worked out. Clearly bitcoin bulls have found themselves on the bleeding edge. Equity Crowdfunding. Beyond Bitcoin: Your Guide to Digital Currencies. Money has transformed from barter to skins to gold-backed currencies and fiat currencies based primarily on the faith its users have in the nation-states who issue it. 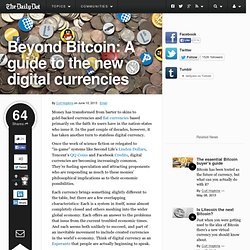 In the past couple of decades, however, it has taken another turn to stateless digital currency. Once the work of science fiction or relegated to “in-game” systems like Second Life’s Linden Dollars, Tencent’s QQ Coins and Facebook Credits, digital currencies are becoming increasingly common. They’re fueling speculation and attracting proponents who are responding as much to these monies’ philosophical implications as to their economic possibilities. Each currency brings something slightly different to the table, but there are a few overlapping characteristics: Each is a system in itself, some almost completely closed and others meshing into the wider global economy.

Each offers an answer to the problems that issue from the current troubled economic times. Bitcoin Currently trades at $121. RIP for double dip? 10 May 2013 Last updated at 12:44 ET There has been encouraging news on the state of the UK recovery in the past few days, suggesting the economy may have gained some momentum in the last couple of months. You might also be interested to know that the Office for National Statistics (ONS) has moved a step closer to revising away last year's double dip recession.

Today's trade figures for March show UK exports rising, and the gap between our exports and our imports narrowed somewhat, though we should remember it is still massive by historical standards. Exports to non-European markets grew 10% on the previous month, with exports to the US up by more than 20%, though exports to EU countries were broadly flat. On the basis of these figures, some in the city think our net trade with the rest of the world may turn out to have made a positive contribution to Britain's growth in the first three months of the year.

Others are more cautious. Is 19th Century Scarcity Politics Driving a 21st Century Abundance Model? Breakdowns of business-as-usual are driving the transition to new economic forms of sharing and caring. 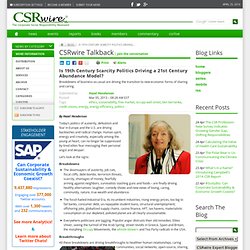 By Hazel Henderson Today’s politics of austerity, defeatism and fear in Europe and the U.S. are driving backlashes and radical change. Human spirit, energy and creativity, especially among the young at heart, can no longer be suppressed by tired elites fear-messaging their personal angst and despair. Mapping the emerging alternative finance system (via P2P foundation) - Futurist Gerd Leonhard. Photos du journal. Trading without money? Why a new system can address the economic spiral. Earlier this month the founder of firm Patagonia, Yvon Chouinard questioned the impact of greener business within an ever expanding economy. 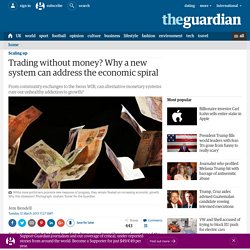 "The elephant in the room is growth," he said. As an increase in gross domestic product (GDP) simply means more money changing hands, Chouinard is not alone in thinking it's a fairly inadequate measure of human progress. Politicians of most countries now agree new measures would be useful, and there is a growing community of professionals who seek to audit various aspects of our happiness and wellbeing. When colleagues enthuse about new measures of progress, I can't help but wonder why for the past 20 years an alternative measure of progress has had such little impact on public policy or corporate strategy. The Human Development Index (HDI) is backed by the United Nations and measures life expectancy, education, and income. While more politicians promote new measures of progress, they remain fixated on increasing economic growth. Virtual currencies: Mining digital gold.

Companies that Practice "Conscious Capitalism" Perform 10x Better - Tony Schwartz. By Tony Schwartz | 2:00 PM April 4, 2013 If you had told me, when I was attending college during the height of the Vietnam War, and the heyday of the counterculture, that several of the most inspiring days of my life would someday be spent with a group of CEOs of large companies, I would have said you were nuts. 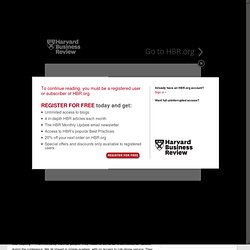 But that’s exactly what I experienced last week, at a small gathering sponsored by an organization called Conscious Capitalism Inc. and held at the Esalen Institute in Big Sur, California. Even today, “conscious” and “capitalism” remain unlikely bedfellows. Both are freighted words that have come to stand for fundamentally different worldviews. Capitalism is associated with individualism, personal ambition, the accumulation of wealth and power, and an identity grounded in external accomplishment. But I did last week. At the most basic level, consciousness simply means being conscious of more. I also admire leaders who put their money where their mouths are.