*The 3 Biggest Remote Teaching Concerns We Need to Solve Now. With the rapid spread of COVID-19, educators across the country and around the world have been tasked with shifting to emergency remote teaching—a move from in-person to remote classes made necessary by pressing circumstances. 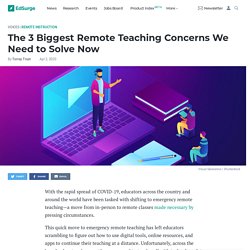 This quick move to emergency remote teaching has left educators scrambling to figure out how to use digital tools, online resources, and apps to continue their teaching at a distance. Unfortunately, across the board, educators have not been prepared to teach well with technology, let alone teach remotely with technology. While the authors of the 2017 National Educational Technology Plan recommended that, “every new teacher should be prepared to model how to select and use the most appropriate apps and tools to support learning and evaluate these tools against basic privacy and security standards,” this has not come to fruition.

Privacy and Student Data With this rapid push to remote teaching, educators may be jumping into the use of digital technologies too fast. *Technology In The Classroom: The Question Is Not "If" But "How" Last Thursday, California approved its first budget under Governor Gavin Newsom, making a substantial down payment on education for the state’s high-tech economy. 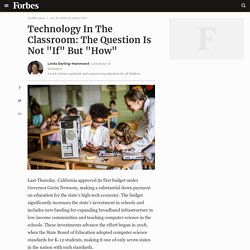 The budget significantly increases the state’s investment in schools and includes new funding for expanding broadband infrastructure in low-income communities and teaching computer science in the schools. These investments advance the effort begun in 2018, when the State Board of Education adopted computer science standards for K-12 students, making it one of only seven states in the nation with such standards. As California focuses its attention on technology instruction, there is likely to be pushback. Across the country, a heated debate continues about the role of technology in the classroom.

*Podcast: Interview with Kristin Ziemke and Katie Muhtaris. *Essential Fires — ImagineLit. I take the match and let it roll over between my fingers—the slender wood cylinder coming to rest every few seconds. 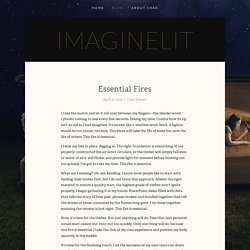 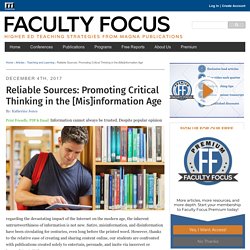 Despite popular opinion regarding the devastating impact of the Internet on the modern age, the inherent untrustworthiness of information is not new. Cipa report. Sherry Turkle: Connected, but alone? Is Google Making Us Stupid? The process of adapting to new intellectual technologies is reflected in the changing metaphors we use to explain ourselves to ourselves. 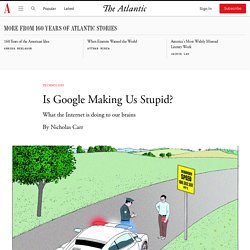 When the mechanical clock arrived, people began thinking of their brains as operating “like clockwork.” Today, in the age of software, we have come to think of them as operating “like computers.” But the changes, neuroscience tells us, go much deeper than metaphor. Thanks to our brain’s plasticity, the adaptation occurs also at a biological level. The Internet promises to have particularly far-reaching effects on cognition. When the Net absorbs a medium, that medium is re-created in the Net’s image. 401 (mostly tech) Prompts for Argumentative Writing - The New York Times. Game Literacy: Games in Education - Should We Teach Game Basics? - Extra Credits. Protecting Student Privacy. Have Smartphones Destroyed a Generation? - The Atlantic (from Beth) Net Neutrality: Why School Librarians Should Care.

On July 12, 2017, the American Library Association (ALA) and nearly 200 other organizations participated in Day of Action, a protest to save Net Neutrality. 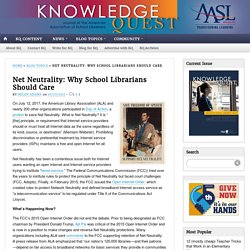 Future of Education: Transcending the Status Quo. By Dr. 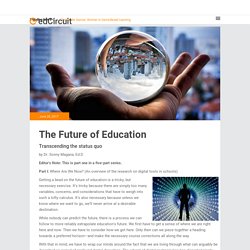 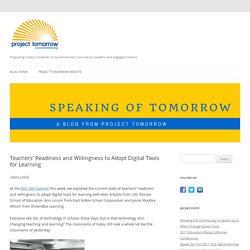 Everyone see lots of technology in schools these days, but is that technology also changing teaching and learning? COPPA, FERPA, SOPIPA, & TOS - Protecting Students while Empowering them to Publish. From High School to Harvard, Students Urge for Clarity on Privacy Rights. What rights do parents, students and teachers have in an educational system increasingly awash in data and technology? That’s one of the underpinning questions behind a campaign launched in March by Providence, Rhode Island’s student union which called for a “Student Bill of Rights” that included (amongst other demands) the right to data privacy. According to the Future of Privacy Forum (FPF), a Washington, D.C. -based nonprofit, states have passed approximately 110 laws since 2013 concerning student data privacy. But what happens in these legislative halls are rarely visible to teachers, students and parents. How Should We Approach Education’s Digital Divide? – Bright.

How Google Took Over the Classroom - The New York Times. But that also caused problems in Chicago and another district when Google went looking for teachers to try a new app — effectively bypassing district administrators. In both cases, Google found itself reined in. Unlike Apple or Microsoft, which make money primarily by selling devices or software services, Google derives most of its revenue from online advertising — much of it targeted through sophisticated use of people’s data. Questions about how Google might use data gleaned from students’ online activities have dogged the company for years. The Optimistic Heart of Digital Citizenship.

How Should We Approach Education’s Digital Divide? – BRIGHT Magazine.