Electric “trackless trains” appear: it is chargeable, has rubber wheels and goes on public road, and is steered by automatic sensor technology – hybrid between bus and train.

Implications: Mobility sector is definitely one of the main polluter, especially considering greenhouse gas emissions in the age of climate change. New innovations may bring us closer to solutions – also in the aspect of social changes, emphasizing and enhancing sharing economy.
In the same time changes may rearrange the roles of modes, and for example scooter sharing might even tempt some commuters away from the energetically much more effective public transport.
Inventions may also increase the overall amount that we travel, similarly to the increase of sent messages in the last decades.
New technology (especially flying) raise safety-, noise- and sustainability concerns too. As electricity seems to be an intermediator of energy, it keeps the question unanswered if energy can be generated on a really sustainable way.

Relations to EEA Global Megatrends: Innovations in mobility sector may change trends: “Accelerating technological change” changes values: in the future it may become less attractive to move to cities (“towards a more urban world”) but all landscapes may become much more urban. Urbanisation and urban sprawl may have “growing pressures on ecosystems”.
It is notable that aviation and shipping is still not in the highlight, however those segments could do measurable steps for abating greenhouse gas emissions.

Scoot: multi-modal shared electric vehicles. Ökonomisches Kalkül / Geschäftsmodell In order to scale up our initiative and grow faster, we will need funding in order to:1) Purchase or lease the electric vehicles that will contribute to reduce the private gas burning vehicles of the street, the noise and the pollution. 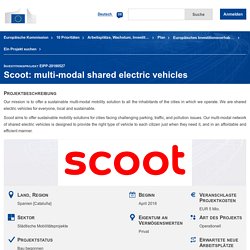 With funding, we will be able to expand faster and make cities more enjoyable through collaborative planning with the administrations. 2) Scale up the team 3) Be able to do more research into multi-modality and in our operative system Zusatzinformationen zum Projekt. Electric vehicles: Government eyes 100% electric public transport through FAME II. Union Minister Anant Geete today said the government is committed to make the country's public transport system fully electric and emphasised that there is a need to increase incentives to promote e-mobility. 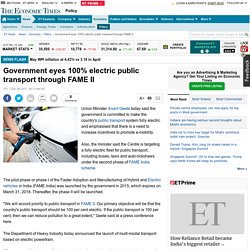 Also, the minister said the Centre is targeting a fully electric fleet for public transport, including buses, taxis and auto-rickshaws under the second phase of FAME India scheme. The pilot phase or phase I of the Faster Adoption and Manufacturing of Hybrid and Electric vehicles in India (FAME India) was launched by the government in 2015, which expires on March 31, 2018. Thereafter, the phase II will be launched. "We will accord priority to public transport in FAME II. Our primary objective will be that the country's public transport should be 100 per cent electric. The Department of Heavy Industry today announced the launch of multi-modal transport based on electric powertrain. "The total allocation to us under FAME scheme was Rs 795 crore for subsidy and charging infrastructure.

Obus-2020 - Solingen. Flying Cars Could Happen. But They'll Probably Create More Problems Than They Solve. There’s a lot of excitement around flying cars right now -- even if they are basically just giant drones. 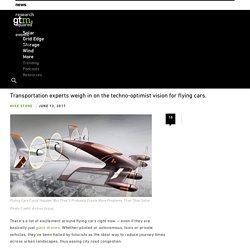 Whether piloted or autonomous, taxis or private vehicles, they’ve been hailed by futurists as the ideal way to reduce journey times across urban landscapes, thus easing city road congestion. But despite the media hype (or perhaps because of it), there are reasons to be skeptical of this vision. Big names including Uber, Airbus and Larry Page are taking a keen interest. Toyota wants to get its prototype ready for the 2020 Olympic Games in Tokyo. A group of startups including E-volo, Terrafugia, AeroMobil, Zee.Aero and Moller International have prototypes ready or in the pipeline. As GTM reported recently, ChargePoint even says it’s preparing to charge flying vehicles, and Dubai has announced a driverless flying taxi service using foldable, one-seater Ehang 184 drones. Last month, Uber hosted the three-day Elevate Summit to accelerate “the future of on-demand urban air transportation.” 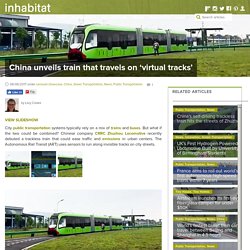 But what if the two could be combined? Chinese company CRRC Zhuzhou Locomotive recently debuted a trackless train that could ease traffic and emissions in urban centers. The Autonomous Rail Transit (ART) uses sensors to run along invisible tracks on city streets. Train tracks on city streets could be a thing of the past if all goes well with the ART, recently unveiled in the city of Zhuzhou in the Hunan province in China, where it recently went on a trial run. Firstpost described the ART as the world’s first trackless train. Related: You won’t believe the interior of Japan’s jaw-dropping new train More than 300 people can ride on the ART, which is comprised of three carriages in its basic state but can expand to include five. The ART is powered by electricity, so it won’t give off carbon emissions as traditional trains do. Forget car sharing – Paris’s shared electric mopeds are the future. Mobility-Startup Unu: Elektro-Roller sind nur der Anfang.

Drones that drive. Being able to both walk and take flight is typical in nature — many birds, insects, and other animals can do both. 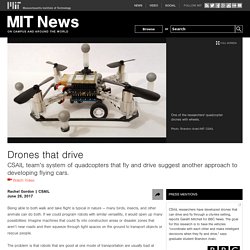 If we could program robots with similar versatility, it would open up many possibilities: Imagine machines that could fly into construction areas or disaster zones that aren’t near roads and then squeeze through tight spaces on the ground to transport objects or rescue people. The problem is that robots that are good at one mode of transportation are usually bad at another.

Airborne drones are fast and agile, but generally have too limited of a battery life to travel for long distances. Ground vehicles, on the other hand, are more energy efficient, but slower and less mobile. Researchers from MIT’s Computer Science and Artificial Intelligence Laboratory (CSAIL) are aiming to develop robots that can both maneuver around on land and take to the skies. How it works The project builds on Araki’s previous work developing a “flying monkey” robot that crawls, grasps, and flies. Flying Cars Could Happen. But They'll Probably Create More Problems Than They Solve.