Water Sanitizer A Safer Solution for Cleaning Kills Bacteria Naturally Electrolyzed Water or EO or EOW Activated Water. So in practical terms, why is activated water so great? 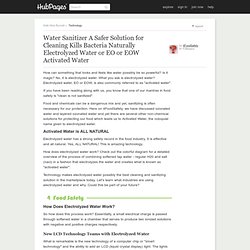 For one, it can deliver large facilities, such as hotels and hospitals, a significant return on investment by saving costly dollars on cleaning chemicals. To date it is a better fit for commercial applications than the home due to size and cost. But activated water is not just about dollar savings, it is also about safety. But is activated water a good sanitizer? Some articles have stated that side by side comparisons have been researched and activated water has proven to be more effective and more efficient. Additionally, the sellers of activated water have contended that sanitized floors have resulted in better traction and greater safety.

In short, corporate America, especially hotels and hospitals, have a duty to review this new technology and its many applications for their facilities. How is Activated Water Being Used Today? Hospitals are using electrolyzed water to fight a nasty germ called MRSA. Magnetic and electric effects on water. Electric effects on water. 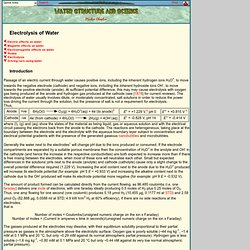 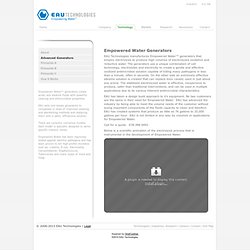 The generators use a unique combination of cell technology, electrolytes and electricity to create a gentle and effective oxidized antimicrobial solution capable of killing many pathogens in less than a minute, often in seconds. On the other side an extremely effective alkaline solution is created that can replace toxic caustic used in just about any arena. The stabilized electrolyzed water is effective, inexpensive to produce, safer than traditional interventions, and can be used in multiple applications due to its various inherent antimicrobial characteristics. EAU has taken a design build approach to it's equipment. Electrolyzed water vs bacteria &c. 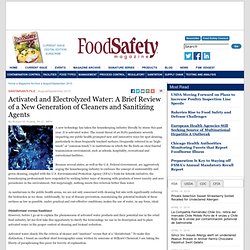 Powitz, Ph.D., MPH A new technology has taken the housekeeping industry literally by storm this past year. It is activated water. The recent threat of an H1N1 pandemic severely impacting our public health prompted new and innovative ways for spot cleaning, particularly to clean frequently touched surfaces (frequently referred to as “high-touch” or “common-touch”) in institutions in which the flu finds an ideal fomital transmission environment, such as schools, hospitality, recreational and correctional facilities.

Because several states, as well as the U.S. As sanitarians in the public health arena, we are not only concerned with cleaning but also with significantly reducing the bioburden as we clean. Activated water closely fits the criteria of cleaner and “sanitizer” versus that of a “disinfectant.” The difference between a “disinfectant” and a “sanitizer” is one of application. Forensic sanitarian Robert W. Lilipool. Electrolysed water. Electrolysed water ("Electrolyzed Water") (EOW or ECA, also known as electrolyzed oxidizing water, electro-activated water or electro-chemically activated water solution) is produced by the electrolysis of ordinary tap water containing dissolved sodium chloride.[1] Typically, tap water has sufficient dissolved salts for the electrolysis of water. 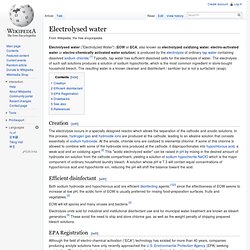 The electrolysis of such salt solutions produces a solution of sodium hypochlorite, which is the most common ingredient in store-bought household bleach. The resulting water is a known cleanser and disinfectant / sanitizer but is not a surfactant (soap). Creation[edit] The electrolysis occurs in a specially designed reactor which allows the separation of the cathodic and anodic solutions. In this process, hydrogen gas and hydroxide ions are produced at the cathode, leading to an alkaline solution that consists essentially of sodium hydroxide. Efficient disinfectant[edit] EOW will kill spores and many viruses and bacteria.[2] EPA Registration[edit]