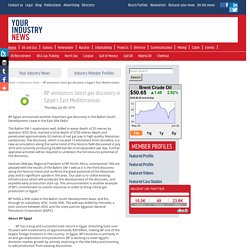 The discovery, which is located 12 kilometers from shoreline, is a new accumulation along the same trend of the Nooros field discovered in July 2015 and currently producing 65,000 barrels of oil equivalent per day. Rich potential in Egypt’s largely untapped mineral deposits. CAIRO // Egypt may be sitting on mineral deposits worth hundreds of billions of dollars which, once developed, could surpass oil as a source of income, says the head of a company prospecting for gold and other minerals in the country’s Eastern Desert. 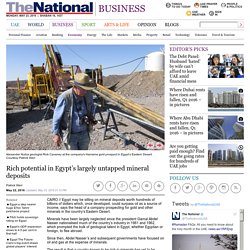 Minerals have been largely neglected since the president Gamal Abdel Nasser nationalised much of the country’s industry in 1961 and 1962, which prompted the bulk of geological talent in Egypt, whether Egyptian or foreign, to flee abroad. Since then, Abdel Nasser’s and subsequent governments have focused on oil and gas at the expense of minerals. The result is that a country known to be rich in minerals has yet to be developed. The Eastern Desert and Sinai are scattered with more than a thousand ancient mining sites, mainly gold, silver and copper, some of which extend back more than 5,000 years to pre-pharaonic times. Egypt explorers hunt gold in the desert, following ancients. EASTERN DESERT, Egypt (AP) " Off the off-road tracks deep in Egypt's eastern desert, prospectors are ramping up the hunt for the treasure once revered by the Pharaohs as the "skin of the gods" " gold. 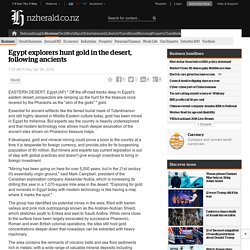 Essential for ancient artifacts like the famed burial mask of Tutankhamun and still highly desired in Middle Eastern culture today, gold has been mined in Egypt for millennia. But experts say the country is heavily underexplored and that modern technology now allows much deeper excavation of the ancient sites shown on Pharaonic treasure maps. If developed, gold and mineral mining could prove a boon to the country at a time it is desperate for foreign currency, and provide jobs for its burgeoning population of 90 million. But miners and experts say current legislation is out of step with global practices and doesn't give enough incentives to bring in foreign investment. At the moment, Campbell's team is drilling core samples that are sent off for analysis in Romania.

Continued below. A Gas Discovery in Egypt Threatens to Upend Mideast Energy Diplomacy. Photo The Italian energy company Eni knew it was taking a big risk this summer when it spent $60 million on an exploratory rig and began drilling more than 100 miles off the coast of Egypt. 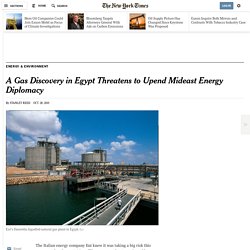 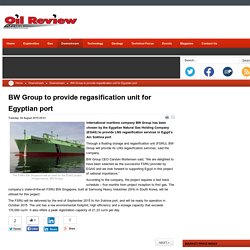 (Image source: BW Group) Through a floating storage and regasification unit (FSRU), BW Group will provide its LNG regasification services, said the company. BW Group CEO Carsten Mortensen said, “We are delighted to have been selected as the successful FSRU provider by EGAS and we look forward to supporting Egypt in this project of national importance.” According to the company, the project requires a fast track schedule – five months from project inception to first gas. The company’s state-of-the-art FSRU BW Singapore, built at Samsung Heavy Industries (SHI) in South Korea, will be utilised for this project. The FSRU will be delivered by the end of September 2015 to Ain Sokhna port, and will be ready for operation in October 2015. 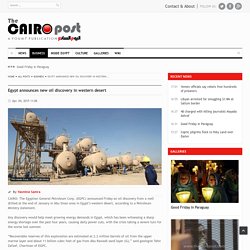 (EGPC) announced Friday an oil discovery from a well drilled at the end of January in Abu Sinan area in Egypt’s western desert, according to a Petroleum Ministry statement. Any discovery would help meet growing energy demands in Egypt, which has been witnessing a sharp energy shortage over the past four years, causing daily power cuts, with the crisis taking a severe turn for the worse last summer. “Recoverable reserves of this exploration are estimated at 2.2 million barrels of oil from the upper marine layer and about 11 billion cubic feet of gas from Abu Rawash sand layer (G),” said geologist Tahir Zafzaf, Chariman of EGPC. The new discovery is a “special” one for the state-owned EGPC’s concession in western desert’s geological structures, as it gives higher potentials and possibilities of finding out petroleum reserves, the statement read. 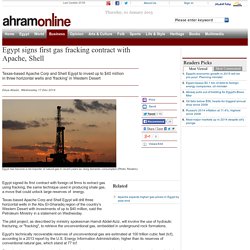 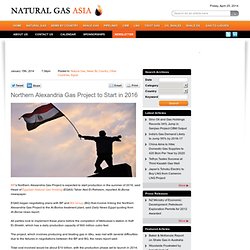 EGAS began negotiating plans with BP and BG Group (BG) that involve linking the Northern Alexandria Gas Project to the Al-Borlos treatment plant, said Daily News Egypt quoting from Al-Borsa news report. All parties look to implement these plans before the completion of Metoubas’s station in Kafr El-Shiekh, which has a daily production capacity of 900 million cubic feet. The project, which involves producing and treating gas in Idku, was met with several difficulties due to the failures in negotiations between the BP and BG, the news report said. Total cost involved would be about $10 billion, with the production phase set to launch in 2014, operating in the deep sea 80 kilometres northwest of Alexandria, Al-Borsa said. Based on the agreement, BP is to act as a contractor for EGAS. Egypt signs three oil, gas agreements with $165 million investment potential. BP finds ‘significant’ gas in Egypt’s East Nile Delta-USO-Stockhouse news. China's Sinopec signs $3.1bn Egypt oil deal with Apache. 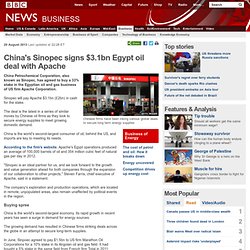 Sinopec will pay Apache $3.1bn (£2bn) in cash for the stake. The deal is the latest in a series of similar moves by Chinese oil firms as they look to secure energy supplies to meet growing domestic demand. China is the world's second-largest consumer of oil, behind the US, and imports are key to meeting its needs. According to the firm's website, Apache's Egypt operations produced an average of 100,000 barrels of oil and 354 million cubic feet of natural gas per day in 2012. "Sinopec is an ideal partner for us, and we look forward to the growth and value generation ahead for both companies through the expansion of our collaboration to other projects," Steven Farris, chief executive of Apache, said in a statement. 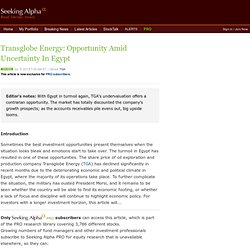 The market has totally discounted the company's growth prospects; as the accounts receivables pile evens out, big upside looms. Introduction Sometimes the best investment opportunities present themselves when the situation looks bleak and emotions start to take over. Egypt State Information Service. Dana Gas makes significant new gas discoveries in Egypt. EGYPT. Dana Gas PJSC, the Middle East's first and largest regional private sector natural gas company, has announced that it has made two new onshore gas discoveries in the Nile Delta Basin of Egypt. Initial estimates indicate that together the two discoveries, known as Alyam-1 and Balsam-1, should increase the company's commercial reserves by between 17 (proved) and 95 (proved & probable) million barrels of oil equivalent (MMBOE).

Dana Gas Commences Production from New Egypt NGL Plant. Kuwait Energy makes new oil discovery in the Gulf of Suez area in Egypt. Kuwait Energy, one of the fastest growing independent oil and gas exploration and production companies in the Middle East, today announced a new oil discovery of Ahmad-2 well, located in the Area A license in the Gulf of Suez, Egypt, adjacent to the Shukheir North West field. Kuwait Energy is the operator of the Area A license under a service agreement with Egypt’s General Petroleum Company (GPC).