Timeless (TV series) - Wikipedia. An experimental time machine is stolen by ex-NSA asset Garcia Flynn, who mysteriously goes off the grid after allegedly killing his wife and child. 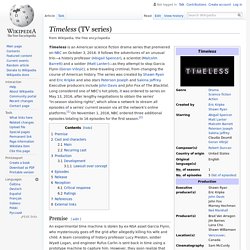 A team consisting of history professor Lucy Preston, soldier Wyatt Logan, and engineer Rufus Carlin is sent back in time using a prototype machine to capture him. However, they soon realize that Flynn and his associates are plotting to rewrite American history, and that each of them has a connection to his plan. Lucy's primary concern is for her ailing mother. Wyatt is shown grieving over the recent demise of his wife. Rufus, the scientist who helped develop the time machine, is distressed over the fact that Flynn stole his invention. 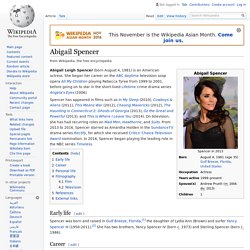 Career[edit] Matt Lanter - Wikipedia. Career[edit] In 2008, he took on the lead role as Zach Conroy in The Cutting Edge: Chasing the Dream, with Francia Raisa. 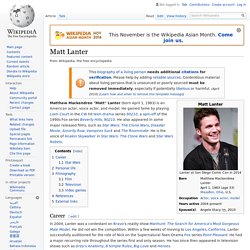 In February 2008, he was announced to portray the lead role of Will, in Lionsgate's Parody/Comedy film Disaster Movie. The film is written and directed by directing and screenwriting duo Jason Friedberg and Aaron Seltzer who have previously worked on other Parody films such as Meet The Spartans and Epic Movie. The film spoofs recent disaster films such as Cloverfield. He stars with Kim Kardashian, Vanessa Minnillo and Carmen Electra. Goran Višnjić - Wikipedia. Credited as Goran Visnjic in his English-language work, he adopted the simplified spelling of his name when he came to the United States in the late 1990s.[3] Early life[edit] Goran Višnjić was born in Šibenik. 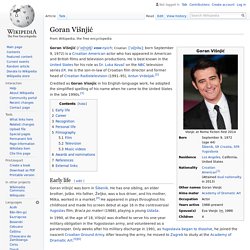 He has one sibling, an elder brother, Joško. His father, Željko, was a bus driver, and his mother, Milka, worked in a market.[4] He appeared in plays throughout his childhood and made his screen debut at age 16 in the controversial Yugoslav film, Braća po materi (1988), playing a young Ustaša. In 1990, at the age of 18, Višnjić was drafted to serve his one-year military obligation in the Yugoslavian army, and volunteered as a paratrooper. Malcolm Barrett (actor) - Wikipedia. Malcolm Barrett (born 1980) is an American actor. 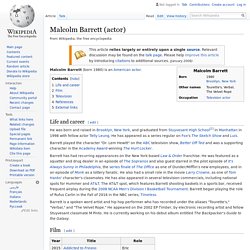 Barrett played the character "Dr. Lem Hewitt" on the ABC television show, Better Off Ted and was a supporting character in the Academy Award-winning The Hurt Locker. Barrett is a spoken word artist and hip hop performer who has recorded under the aliases "Tourette's," "Verbal," and "The Velvet Rope. " He appeared on the 2002 EP Timber, by electronic recording artist and fellow Stuyvesant classmate M Pinto.