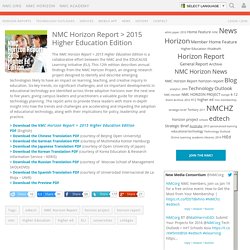 This 12th edition describes annual findings from the NMC Horizon Project, an ongoing research project designed to identify and describe emerging technologies likely to have an impact on learning, teaching, and creative inquiry in education. Six key trends, six significant challenges, and six important developments in educational technology are identified across three adoption horizons over the next one to five years, giving campus leaders and practitioners a valuable guide for strategic technology planning. The report aims to provide these leaders with more in-depth insight into how the trends and challenges are accelerating and impeding the adoption of educational technology, along with their implications for policy, leadership and practice. 2015 K-12 Edition. What is on the five-year horizon for K-12 schools worldwide? 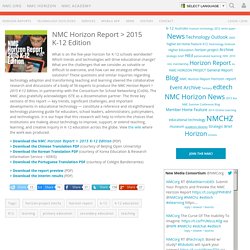 Which trends and technologies will drive educational change? What are the challenges that we consider as solvable or difficult to overcome, and how can we strategize effective solutions? These questions and similar inquiries regarding technology adoption and transforming teaching and learning steered the collaborative research and discussions of a body of 56 experts to produce the NMC Horizon Report > 2015 K-12 Edition, in partnership with the Consortium for School Networking (CoSN). The NMC also gratefully acknowledges ISTE as a dissemination partner. The three key sections of this report — key trends, significant challenges, and important developments in educational technology — constitute a reference and straightforward technology planning guide for educators, school leaders, administrators, policymakers, and technologists. > Download the report preview (PDF)> Download the interim results (PDF)

7 of Leslie Fisher's favorite gadgets for 2015 and beyond. Futuristic drones, wearables, and augmented reality are cool tools to watch Speaker and self-professed gadget geek Leslie Fisher took to ISTE 2015 to share her favorite futuristic tech tools at her session “Attack of the Gadgets,” where she previewed everything from drones that follow you to next-gen augmented reality tools to a gadget that really does attack you. 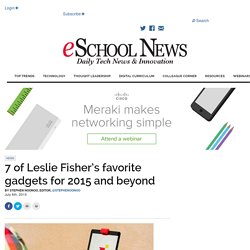 From the just-released to the possible pipe dream, here’s a sampling of the future of tech. Lily. Your own personal paparazzi drone flies and follows you (or, rather, the tracking device you wear like a watch) for up to 20 minutes as it snaps photos and records video from way up high. It’s also waterproof, captures sound, and shoots in HD.Release: February 2016; $500 Pavlok.

QBall. Next page: Augmented reality, iPad tools, & more. The Future of Education: Epic 2020. Google self-driving car has no steering wheel or brake. If you're uneasy at the idea of riding in a vehicle that drives itself, just wait till you see Google's new car. 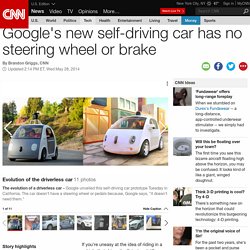 It has no gas pedal, no brake and no steering wheel. Google has been demonstrating its driverless technology for several years by retrofitting Toyotas, Lexuses and other cars with cameras and sensors. But now, for the first time, the company has unveiled a prototype of its own: a cute little car that looks like a cross between a VW Beetle and a golf cart. "They won't have a steering wheel, accelerator pedal, or brake pedal ... because they don't need them," Google said Tuesday in a blog post introducing the unnamed electric vehicles.

"Our software and sensors do all the work. " Unlike previous models, these cars won't have human drivers monitoring them at all times. The cars' speed for now has been capped at 25 mph, allowing engineers to minimize the risk of crashes during testing. Inside, the spartan cars have few dashboard controls, no glove box and no stereo. 2014 Horizon Report. Miracles You’ll See In The Next Fifty Years.