America Needs to Get Over its Reverence for the Bachelor's Degree - The Atlantic. Two years ago, my nephew was set to graduate from Maryland’s Towson University with a degree in political science. 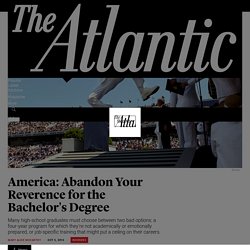 After six long years, both he and his parents were ready to breathe a sigh of relief—he had made it to the finish line. Here's the best case that software is about to disrupt education. Reviewing Jeff Selingo's 'There Is Life After College' America’s students and parents have good reason to fear life after college. 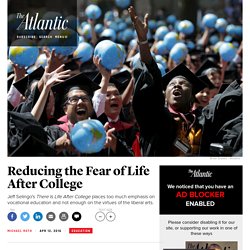 Though Bachelor’s degrees are now needed more than ever, over the last 15 years the average wage for someone holding one has declined by 10 percent, and the net worth of those under 35 has gone down by nearly 70 percent since the early 1980s. Letter Grades Deserve an 'F' - Jessica Lahey. Letter grades are a tradition in our educational system, and we accept them as fair and objective measures of academic success. 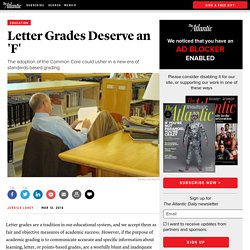 However, if the purpose of academic grading is to communicate accurate and specific information about learning, letter, or points-based grades, are a woefully blunt and inadequate instrument.

Sugata Mitra shows how kids teach themselves. How a Radical New Teaching Method Could Unleash a Generation of Geniuses. You can read a version of this story in Spanish here. 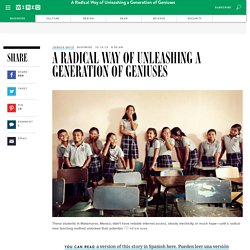 Pueden leer una versión de esta historia en español aquí. José Urbina López Primary School sits next to a dump just across the US border in Mexico. The Future of Learning, Networked Society - Ericsson. Daphne Koller: What we're learning from online education. Are Universities Going the Way of Record Labels? - Martin Smith. MOOCs Aren’t Revolutionizing College, but They’re Not a Failure. A few years ago, the most enthusiastic advocates of MOOCs believed that these “massive open online courses” stood poised to overturn the century-old model of higher education. 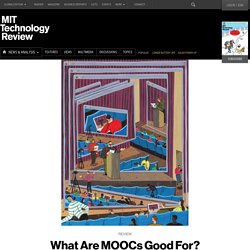 Their interactive technology promised to deliver top-tier teaching from institutions like Harvard, Stanford, and MIT, not just to a few hundred students in a lecture hall on ivy-draped campuses, but free via the Internet to thousands or even millions around the world. At long last, there appeared to be a solution to the problem of “scaling up” higher education: if it were delivered more efficiently, the relentless cost increases might finally be rolled back.

Some wondered whether MOOCs would merely transform the existing system or blow it up entirely. Computer scientist Sebastian Thrun, cofounder of the MOOC provider Udacity, predicted that in 50 years, 10 institutions would be responsible for delivering higher education. Colleges Cutting Lectures, and Costs. MANCHESTER, Mich. 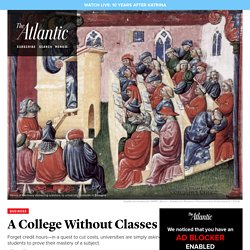 —Had Daniella Kippnick followed in the footsteps of the hundreds of millions of students who have earned university degrees in the past millennium, she might be slumping in a lecture hall somewhere while a professor droned. But Kippnick has no course lectures. She has no courses to attend at all. No classroom, no college quad, no grades. Her university has no deadlines or tenure-track professors. New Report Reimagines Learning in a Networked Society. A research report released today by the Connected Learning Research Network tackles the big issues in education and fundamentally reimagines what learning looks like in the 21st century. 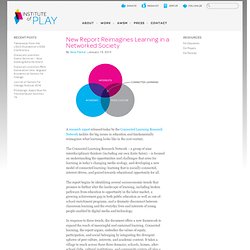 Journal of e-Learning and Knowledge Society. The Challenge of Open Education Eleonora Pantò, Anna Comas-Quinn Abstract Digital culture and the remix culture it has generated have changed the way in which knowledge and learning are constructed.‬ 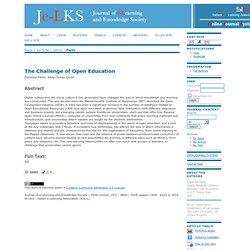 The last decade since the Massachusetts Institute of Technology (MIT) launched the Open Courseware initiative (OCW) in 2002 has seen a significant increase in the number of initiatives related to Open Educational Resources (OER) and open education in general. New institutions, with different objectives and business models, are emerging rapidly outside traditional universities: start-ups that offer free Massive Open Online Courses (MOOC), consortia of universities from four continents that share teaching materials and infrastructure, and universities where classes are taught by the students themselves.‬

This work is licensed under a Creative Commons Attribution 3.0 License. The student authored syllabus. Author: Suz Burroughs In either formal learning, informal learning or models which transition between the two, there are many opportunities for learners to co-create the syllabus and/or outline their own course of action. 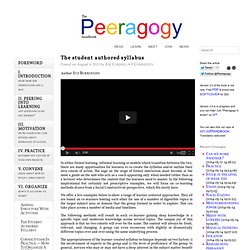 The sage on the stage of formal instruction must become at the most a guide on the side who acts as a coach appearing only when needed rather than as a lecturer who determines the content that the learners need to master. In the following inspirational but certainly not prescriptive examples, we will focus on co-learning methods drawn from a Social Constructivist perspective, which fits nicely here. We offer a few examples below to show a range of learner centered approaches. Hacking Your Education. Saying No to College. Fast Company's Guide To The Generation Flux College Degree. The cost of college tuition has risen faster than nearly any other good or service in America for more than three decades. 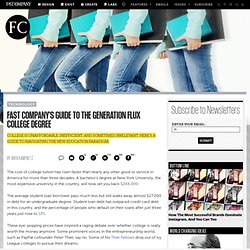 A bachelor’s degree at New York University, the most expensive university in the country, will now set you back $244,000. The average student loan borrower pays much less but still walks away almost $27,000 in debt for an undergraduate degree. Student loan debt has outpaced credit card debt in this country, and the percentage of people who default on their loans after just three years just rose to 13%.

These eye-popping prices have inspired a raging debate over whether college is really worth the money anymore. P2PU. How we test ideas about learning. Current projects Use the drop down list above to see all current projects. Here are a few examples: The Citizen Science project makes scientific ideas and practice accessible to everyone.The Open Masters creates a template for anyone to pursue their own semi-formal study.The Mechanical MOOC automates a massive course experience. What’s a project?

Projects take many forms- such as organizing face to face meetings around an existing course, building a community of ambassadors, conducting research experiments, running experimental courses, or building technology and tools- but all projects: Company's skills tests offer glimpse of alternative credentialing. The big enchilada of potential disruptions to higher education is if employers go outside of the academy to size up job seekers. While that prospect remains fanciful, for now, new approaches to skills assessment show what the future could look like.

Skill Tests - Smarterer. Hacker Ethics and Higher Learning. It is easy to be distracted by the immense technological changes affecting higher education today. Change is here. We are all faced with it in our classrooms and our offices, and we see it in the lives of students, donors, administrators, and alumni. The changes are happening so fast; the quality of what is considered “normal” is transforming quickly.

How can we assess the key issues of place and face in higher education when the ground beneath our collective feet keeps shifting? Nmr-21-nelson.pdf (application/pdf Object) Noam Chomsky - The Purpose of Education. Noam Chomsky on Democracy and Education in the 21st Century and Beyond. Combat the epidemic of misinformation that plagues the corporate media! Click here to make a tax-deductible donation to Truthout and keep independent journalism strong. Noam Chomsky. (Photo: Andrew Rusk / Flickr ) Noam Chomsky is an American linguist, philosopher, political critic and activist. He is an institute professor and professor emeritus in the department of linguistics and philosophy at MIT, where he has worked for over 50 years.

Why College Professors Are Afraid to Teach Millennials. Riesman model of Education and Culture. In April 1997 the Harvard University Gazette reported, "The journal Contemporary Sociology has named the best-selling sociology book ever... Bloom's Taxonomy of Learning Domains. Bloom's Taxonomy was created in 1956 under the leadership of educational psychologist Dr Benjamin Bloom in order to promote higher forms of thinking in education, such as analyzing and evaluating concepts, processes, procedures, and principles, rather than just remembering facts (rote learning).

Sir Ken Robinson: Do schools kill creativity? Sir Ken Robinson: Bring on the learning revolution! RSA Animate - Changing Education Paradigms. American Schools Are Training Kids for a World That Doesn't Exist. The Skills Gap: America's Young Workers Are Lagging Behind. New findings suggest that U.S. millennials are far less competent than their peers in Europe and Asia. Young American workers today are more educated than ever before, but the nation’s largest generation is losing its edge against the least and most educated of other countries, according to a provocative new report.

The report’s authors warn these findings portend a growing gap between rich and poor American workers and that the lackluster results threaten U.S. competitiveness in an increasingly globalized market. 10 talks from inspiring teachers. Professor John Keating of “The Dead Poets Society.” The Flipped Classroom: Turning the Traditional Classroom on its Head. Inquiry-based Learning: Explanation. Reading, Writing, and Self-Esteem — Emerging Ideas. The illustrated guide to a Ph.D. Four Secrets To Lift The “Curse Of Expertise”