The 3 Essential Ingredients for Cooking Up Transit That People Want to Ride – Streetsblog USA. This New “Mobility Service” App Will Help Helsinki Ditch Car Ownership. In Helsinki, it will soon be cheaper–and arguably more convenient–to subscribe to a new “mobility service” than own a car. 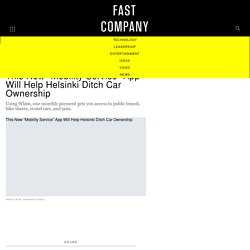 If you need to go somewhere, you pull up a new app, which calculates the best way to get there–public transit, a bike-share bike, taxi, a rental car, or a combination. Instead of buying individual tickets, you pay a monthly fee of €249. These New Transit Signs Could Save Chicago Billions of Dollars. You know how people say that we only use one-tenth of our brains? 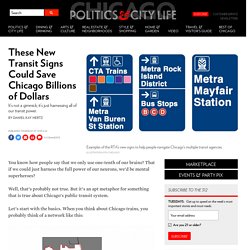 That if we could just harness the full power of our neurons, we’d be mental superheroes? Well, that’s probably not true. But it’s an apt metaphor for something that is true about Chicago’s public transit system. Let’s start with the basics. This Electric Bus Recharges At Bus Stops In Just A Few Minutes. Americans have traditionally distinguished themselves from people in other countries by believing in Horatio Alger-type stories. 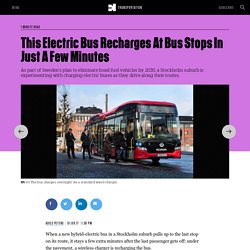 The nation was founded on the idea that anyone who works hard enough, and has enough talent, can make it here—and don't let anyone tell you otherwise. Europeans, by contrast, have (generally speaking) been more pessimistic. They, too, believed in hard work. But they have rarely considered the economic system fair to all people and that governments don't have a role in leveling the scales of opportunity or economic outcomes. The Bluetooth-Enabled Wayfindr App Helps Riders With Visual Impairments Navigate Through Subway Systems. 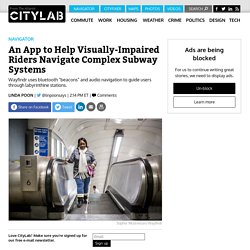 Nicolas Kruchten's Metro Map for Montreal's Green Line Puts Platforms First. Riders can easily determine the perfect place to await a train, relative to where they want to end up. 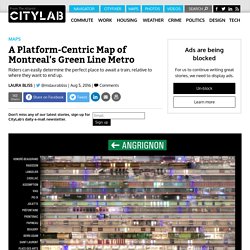 The Train That Saved Denver. A decade ago, travelers arriving at Denver’s sprawling new airport would look out over a vast expanse of flat, prairie dog-infested grassland and wonder if their plane had somehow fallen short of its destination. 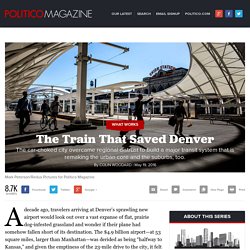 The $4.9 billion airport—at 53 square miles, larger than Manhattan—was derided as being “halfway to Kansas,” and given the emptiness of the 23-mile drive to the city, it felt that way. Last month, arriving visitors boarded the first trains headed for downtown, a journey that zips past a new Japanese-style “smart city” emerging from the prairie before depositing passengers 37 minutes later in a bustling urban hive of restaurants, shops and residential towers that only six years ago was a gravelly no man’s land—an entire $2 billion downtown neighborhood that’s mushroomed up around the hub of Denver’s rapidly expanding light rail system.

Story Continued Below. Transport Reviews: How Transit Infrastructure Affects Propery Values. In transportation planning, the logic is pretty consistent: Build a rapid transit station, and land values are supposed to jump up. 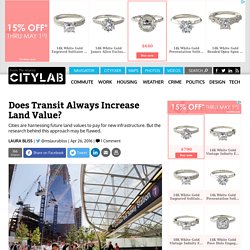 That’s because rail and bus rapid transit provide all kinds of benefits—reduced cost, time, and stress for commuters; cleaner air; more walkable neighborhoods—that can be translated into dollars and factored into property values. Cities can “capture” this “land value uplift” to pay for transportation infrastructure projects (for example, by creating a special tax on certain developments that are projected to benefit most from the expanded transit access). This is the basic financing mechanism behind many recent major projects across the country, including Hudson Yards in New York City. Making The Bus More Like an Uber With Real-Time Data and Mobile Payments. Mass transit usage rates across the U.S. have been stuck at around 5% for decades, but as cities grow, increasing that percentage is imperative to controlling congestion. 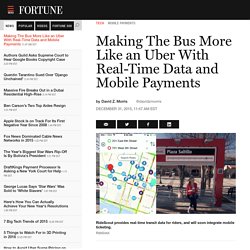 One part of the solution will be making buses and trains easier to ride. Austin-based RideScout is working to do that by putting transit schedules and ticketing on mobile phones. RideScout’s core product is an app that provides a detailed comparison of how, and how fast, you can get from point A to point B by various methods. The app draws not just on published schedules, but on real-time data about exactly where buses and trains are—a neat trick that comes courtesy of the GTSS transit data standard championed, among others, by Google. That granular data makes mass transit feel a bit more like Uber and Lyft. This Interactive Visualization Explains the 'Vicious Cycle' of Bus Bunching. Good Public Buses Can Dramatically Reduce Employee Turnover for Local Business. Jobs are moving back into city centers, but there's still an awful lot of them in the urban fringes and the suburbs—places typically hard for public transportation to serve. 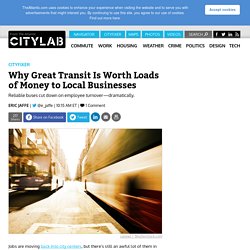 Broadening the city through a universal fare card. » The Paris region plans a single monthly fare for transit access, eliminating zones for pass holders, with the dual goals of encouraging more transit use and social integration. 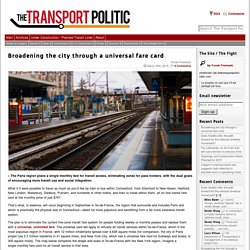 San Francisco's All-Door Bus Boarding Program Has Been a Huge Success. She Tried Commuting to Work by Streetcar. It Took as Long as Walking. Has the Streetcar Boom Reached the End of the Line? MTA buses will blare alert to warn pedestrians. RLJR NEWS The MTA will attach speakers to the exterior of buses to blare warnings to pedestrians as the vehicles are turning. The pilot program will start next fall. Stand clear of the turning bus! Pedestrians at city intersections will receive warnings when a bus is turning — from the bus itself — under a pilot program being developed by the MTA. 3 Big Challenges for Planning Multi-Modal Cities. Cities of all sizes are reorienting their transportation priorities toward people over cars. Rebranding streets as "complete," "shared," or "great" reflects a turn away from automobility as the only choice for urban travel. Local transportation officials and planners now place a larger focus on offering many modes of travel and consider quality-of-life rather than simply encouraging driving everywhere.

Though cars are still dominant, the era of automobility seems to have peaked. Yet continued reductions in driving require true multi-modalism: rather than relying on one mode of transportation, or expecting that most driving trips can be substituted for transit trips, people need to be able to choose from a network of options, including not traveling at all. The promise of multi-modal streets hides the fact that such a dramatic shift away from the traditional American form of auto-oriented personal urban transportation is much more difficult than just accommodating drivers everywhere. Overall, U.S. Streetcars Just Aren't Meeting the Standards of Good Transit. Since the U.S. streetcar revival relies heavily on transportation subsidies, it's only fair to expect the latest wave of streetcar lines to produce benefits related to (wait for it) transportation.

But the new systems in operation—ten by the latest tally, with a few dozen more being planned—have left much to be desired on that seemingly essential count. Notwithstanding the legacy system in New Orleans, the best evidence to date places streetcars somewhat outside the transit network, more a tool for tourism than city mobility. The most commonly cited problem with new streetcars—Matt Yglesias calls it the "original sin"—is that they tend to run in mixed traffic alongside cars. The resulting slow speeds, combined with the relatively short length of the lines (often just a mile or two), means many potential riders could sooner reach their destination by foot. But the problem goes beyond infrastructure design to service itself.

And again, that's the minimum standard. 3 Big-Time Benefits of Real-Time Transit Data. Singapore's Early Morning Free Transit Program Has Been a Huge Success. Last week, Toronto mayoral candidate David Soknacki made a bold suggestion to improve the morning transit commute: offer free rides to anyone traveling before rush-hour. How Denver Is Becoming the Most Advanced Transit City in the West. The Rise of Private 'Luxury' Mass Transit Buses.