What is Value Investing? - The Value Perspective - Schroders. The simple explanation… Value investing is the art of buying stocks which trade at a significant discount to their intrinsic value. 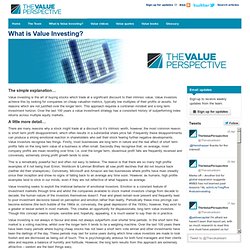 Value investors achieve this by looking for companies on cheap valuation metrics, typically low multiples of their profits or assets, for reasons which are not justified over the longer term. This approach requires a contrarian mindset and a long term investment horizon. Over the last 100 years a value investment strategy has a consistent history of outperforming index returns across multiple equity markets. A little more detail… There are many reasons why a stock might trade at a discount to it’s intrinsic worth, however, the most common reason is short term profit disappointment, which often results in a substantial share price fall.

This is a remarkably powerful fact and often not easy to believe. Value investing seeks to exploit the irrational behavior of emotional investors. Some hard proof… Examining Benjamin Graham’s Record: Skill Or Luck? Two recent articles, Was Benjamin Graham Skillful or Lucky? 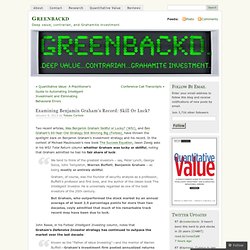 (WSJ), and Ben Graham’s 60-Year-Old Strategy Still Winning Big (Forbes), have thrown the spotlight back on Benjamin Graham’s investment strategy and his record. In the context of Michael Mauboussin’s new book The Success Equation, Jason Zweig asks in his WSJ Total Return column whether Graham was lucky or skillful, noting that Graham admitted he had his fair share of luck: We tend to think of the greatest investors – say, Peter Lynch, George Soros, John Templeton, Warren Buffett, Benjamin Graham – as being mostly or entirely skillful.Graham, of course, was the founder of security analysis as a profession, Buffett’s professor and first boss, and the author of the classic book The Intelligent Investor.

John Reese, in his Forbes’ Intelligent Investing column, notes that Graham’s Defensive Investor strategy has continued to outpace the market over the last decade: 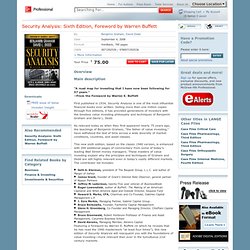 "--From the Foreword by Warren E. Buffett First published in 1934, Security Analysis is one of the most influential financial books ever written. As relevant today as when they first appeared nearly 75 years ago, the teachings of Benjamin Graham, “the father of value investing,” have withstood the test of time across a wide diversity of market conditions, countries, and asset classes. This new sixth edition, based on the classic 1940 version, is enhanced with 200 additional pages of commentary from some of today’s leading Wall Street money managers. Seth A. Featuring a foreword by Warren E. Table of contents Author comments Benjamin Graham is considered to be the founder of value investing and taught at Columbia University’s Graduate School of Business. David L.

Back cover copy “A roadmap for investing that I have now been following for 57 years.”

Charles Munger: A Lesson on Elementary, Worldly Wisdom As It Relates To Investment Management & Business. I’m going to play a minor trick on you today because the subject of my talk is the art of stock picking as a subdivision of the art of worldly wisdom. 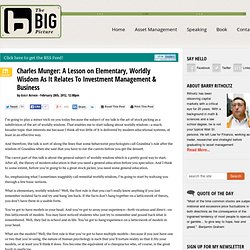 That enables me to start talking about worldly wisdom—a much broader topic that interests me because I think all too little of it is delivered by modern educational systems, at least in an effective way. And therefore, the talk is sort of along the lines that some behaviorist psychologists call Grandma’s rule after the wisdom of Grandma when she said that you have to eat the carrots before you get the dessert. The carrot part of this talk is about the general subject of worldly wisdom which is a pretty good way to start. After all, the theory of modern education is that you need a general education before you specialize.

And I think to some extent, before you’re going to be a great stock picker, you need some general education. What is elementary, worldly wisdom? You’ve got to have models in your head. What are the models?