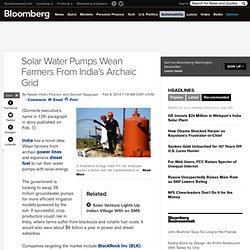 India has a novel idea: Wean farmers from archaic power lines and expensive diesel fuel to run their water pumps with solar energy. The government is looking to swap 26 million groundwater pumps for more efficient irrigation models powered by the sun. If successful, crop production could rise in India, where farms suffer from blackouts and volatile fuel costs. It would also save about $6 billion a year in power and diesel subsidies. Companies targeting the market include BlackRock Inc (BLK).- backed SunEdison Inc. Energy Justice Network. Energy Justice Map. Energy Justice Platform. Printable PDF version Energy Justice Platform [See the bottom of this page for definitions. 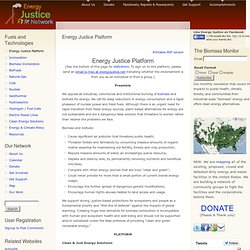 To sign on to this platform, please send an email to traci at energyjustice.net indicating whether the endorsement is from you as an individual or from a group.] Preamble We oppose all industrial, commercial and institutional burning of biomass and biofuels for energy. We call for deep reductions in energy consumption and a rapid phaseout of nuclear power and fossil fuels. Interactive Ecology. ‘Industrial Scale’ Hunting of Migratory Amur Falcons in Nagaland, India. Every year thousands of migratory Amur falcons (Falco amurensis) are hunted by locals in the Indian State of Nagaland during their passage through that region. 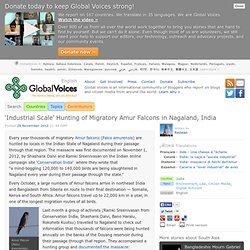 Google Earth Reveals Devastation Caused by Marijuana Growers. Elevated carbon dioxide making arid regions greener. 31 May 2013 AGU Release No. 13-24 WASHINGTON, DC—Scientists have long suspected that a flourishing of green foliage around the globe, observed since the early 1980s in satellite data, springs at least in part from the increasing concentration of carbon dioxide in Earth’s atmosphere. 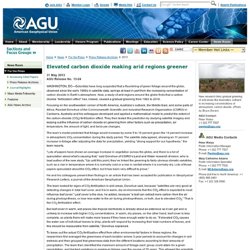 Now, a study of arid regions around the globe finds that a carbon dioxide “fertilization effect” has, indeed, caused a gradual greening from 1982 to 2010. Focusing on the southwestern corner of North America, Australia’s outback, the Middle East, and some parts of Africa, Randall Donohue of the Commonwealth Scientific and Industrial Research Organization (CSIRO) in Canberra, Australia and his colleagues developed and applied a mathematical model to predict the extent of the carbon-dioxide (CO 2 ) fertilization effect. The team’s model predicted that foliage would increase by some 5 to 10 percent given the 14 percent increase in atmospheric CO 2 concentration during the study period. NASA Time-lapse Satelite Imagery of Arctic Ice Cap Melt. Environmental news and information - mongabay.com. The Trillion-Gallon Loophole: Lax Rules for Drillers that Inject Pollutants Into the Earth. The remains of a tanker truck after an explosion ripped through an injection well site in a pasture outside of Rosharon, Texas, on Jan. 13, 2003, killing three workers. 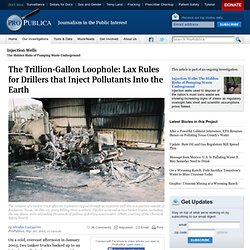 The fire occurred as two tanker trucks, including the one above, were unloading thousands of gallons of drilling wastewater. (Photo courtesy of the Chemical Safety Board) Secret funding helped build vast network of climate denial thinktanks. Conservative billionaires used a secretive funding route to channel nearly $120m (£77m) to more than 100 groups casting doubt about the science behind climate change, the Guardian has learned. 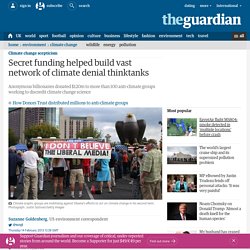 The funds, doled out between 2002 and 2010, helped build a vast network of thinktanks and activist groups working to a single purpose: to redefine climate change from neutral scientific fact to a highly polarising "wedge issue" for hardcore conservatives. The millions were routed through two trusts, Donors Trust and the Donors Capital Fund, operating out of a generic town house in the northern Virginia suburbs of Washington DC. Donors Capital caters to those making donations of $1m or more. Whitney Ball, chief executive of the Donors Trust told the Guardian that her organisation assured wealthy donors that their funds would never by diverted to liberal causes. 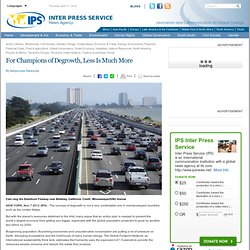 Credit: Minesweeper/GNU license - The concept of degrowth is not a very comfortable one in overdeveloped countries such as the United States. But with the planet’s resources stretched to the limit, many argue that an action plan is needed to prevent the world’s largest economy from getting any bigger, especially with the global population projected to grow by another two billion by 2050. This Is the Man Bill Gates Thinks You Absolutely Should Be Reading - Wired Science. Author Vaclav Smil tackles the big problems facing America and the world. 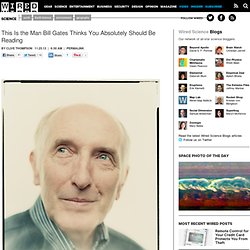 Andreas Laszlo Konrath “There is no author whose books I look forward to more than Vaclav Smil,” Bill Gates wrote this summer. The Methane Beneath Our Feet by Bill McKibben. Insouciant New Yorkers—here is another pending disaster to shrug off with characteristic brio! 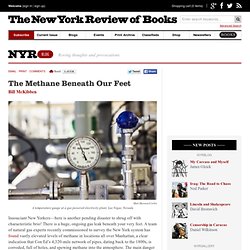 There is a huge, ongoing gas leak beneath your very feet. Coffee threatened by climate change. Disease Outbreak Threatens the Future of Good Coffee. A disease called coffee rust has reached epidemic proportions in Central America, threatening the livelihoods of hundreds of thousands of farmers and the morning pick-me-up of millions of coffee drinkers. 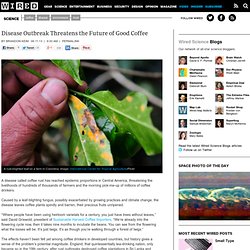 Caused by a leaf-blighting fungus, possibly exacerbated by growing practices and climate change, the disease leaves coffee plants spindly and barren, their precious fruits unripened. “Where people have been using heirloom varietals for a century, you just have trees without leaves,” said David Griswold, president of Sustainable Harvest Coffee Importers. “We’re already into the flowering cycle now, then it takes nine months to incubate the beans. You can see from the flowering what the losses will be. It’s just twigs.

The effects haven’t been felt yet among coffee drinkers in developed countries, but history gives a sense of the problem’s potential magnitude. Coffee rust first occurred in Central America in the mid-1970s, but outbreaks didn’t reach industry-threatening levels. Water Shortage! Ever since the beginning of this nation, Americans have always been able to take for granted that there would always be plenty of fresh water. But unfortunately that is rapidly changing. Due to pollution, corruption, inefficiency and the never ending greed of the global elite, the United States (and the entire world) is heading for a very serious water shortage. Already, there are some areas of the United States where water is the number one local political issue.

In fact, water is becoming so scarce in certain areas that some states are actually battling in court over it. Map Room: Hidden Waters. Kenya finds huge water reserve. A scientist who helped discover a huge water reserve beneath Kenya has told ITV News the technology involved could help tackle water shortages across Africa. Potential significance of discovery cannot be overstated. At first glance it is an unremarkable spectacle, a couple of feet of oily steel pipe sticking out of a scorched African plain.

But the potential significance of the borehole we were shown at Lokitipi in Northern Kenya can't be overstated. Scientists have found water here. Massive underground water reserve discovered in drought-stricken Kenya. Scientists in Kenya have discovered a massive underground reserve that could allow the drought-ravaged country to meet its water needs for the next 70 years. Discovered in the desert of Kenya's Turkana region, the Lotikipi Basin Aquifer contains more than 200 billion cubic meters of fresh water, and is about the size of Rhode Island. All told, the region has at least 250 billion cubic meters of fresh water stored in underground reserves, which are replenished at a rate of 3.4 billion cubic meters per year.

The discovery, first reported by ITV News, will be officially announced Wednesday by the Kenyan government and UNESCO, which helped realize the project with funding from the Japanese government. The project was spearheaded by Alain Gachet, president and CEO of Radar Technologies International (RTI), a France-based natural resources exploration firm. There's an Ocean Deep Inside the Earth. Shell’s Niger delta oil spill could be worse than reported. Stop the Canadian Oil Sand Madness Now. Apple's Chinese Suppliers Accused of Causing Significant Environmental Damage. This leopard's death is a familiar tragedy. India, Pakistan and the Snow Leopard: Javed Naqi. Leopard attacks villagers in India – in pictures.