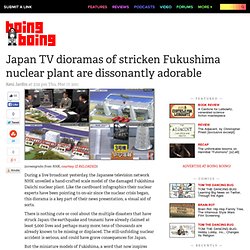 Like the cardboard infographics their nuclear experts have been pointing to on-air since the nuclear crisis began, this diorama is a key part of their news presentation, a visual aid of sorts. There is nothing cute or cool about the multiple disasters that have struck Japan: the earthquake and tsunami have already claimed at least 5,000 lives and perhaps many more; tens of thousands are already known to be missing or displaced. The still-unfolding nuclear accident is serious, and could have grave consequences for Japan. But the miniature models of Fukishima, a word that now inspires fear and iodide pill hoarding in people around the world--well, they are so cute, as one person said on Twitter today, you almost want to adopt one. There is something comforting about them. 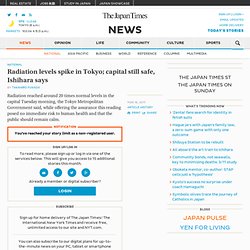 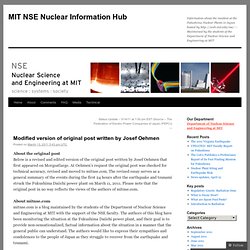 Moved Temporarily. Herman_Japan_Q_A_03_15. International : Russian experts on Chernobyl scenario in Japan. Q&A on the Nuclear Power Stations. Please refrain from copy and pasting this manuscript, only share via linking. 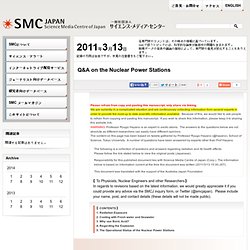 We are currently in a complicated situation and are continuously collecting information from several experts in order to provide the most up to date scientific information available. Because of this, we would like to ask people to refrain from copying and pasting this manuscript. If you wish to share this information, please keep it to sharing this website link. WARNING: Professor Ryugo Hayano is an expert in exotic atoms. The answers to the questions below are not absolute as different researchers can easily have different opinions.

【To Physicists, Nuclear Engineers and other Researchers】 In regards to revisions based on the latest information, we would greatly appreciate it if you could provide any advice via the SMCJ inquiry form, or Twitter (@smcjapan). 【CONTENTS】 1. 1. Nuke Plant Crisis Worsens as Radiation Levels Rise. [UPDATE: 5:59 PM ET: The evacuation zone around the power plant has been increased to 10 km, or 6.2 mi.] 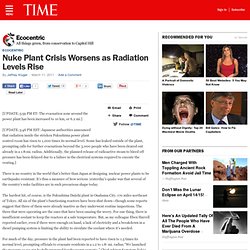 [UPDATE: 5:46 PM EST: Japanese authorities announced that radiation inside the stricken Fukushima power plant control room has risen to 1,000 times its normal level. Some has leaked outside of the plant, prompting calls for further evacuations beyond the 3,000 people who have been cleared out already in a 1.8-mi. radius. Water injected into Fukushima reactor. Authorities scrambled Sunday to control an overheating reactor at the problem-prone Fukushima No. 1 nuclear power plant by injecting seawater and venting gas to reduce the pressure inside. 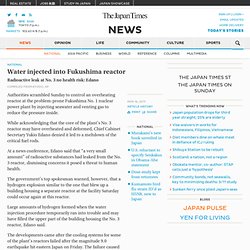 While acknowledging that the core of the plant’s No. 3 reactor may have overheated and deformed, Chief Cabinet Secretary Yukio Edano denied it led to a meltdown of the critical fuel rods. At a news conference, Edano said that “a very small amount” of radioactive substances had leaked from the No. 3 reactor, dismissing concerns it posed a threat to human health.

The government’s top spokesman warned, however, that a hydrogen explosion similar to the one that blew up a building housing a separate reactor at the facility Saturday could occur again at this reactor. Large amounts of hydrogen formed when the water injection procedure temporarily ran into trouble and may have filled the upper part of the building housing the No. 3 reactor, Edano said. Energy map provided - Yahoo! News Photos. Japanese nuclear reactor in peril after deadly earthquake, tsunami off coast. Japanese authorities began evacuating more than 200,000 people Saturday from areas around two nuclear power plants after an explosion at one of them damaged a building housing an aging U.S. 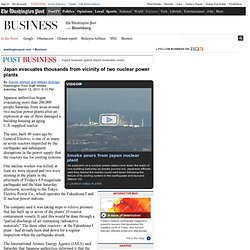 -supplied reactor. The unit, built 40 years ago by General Electric, is one of as many as seven reactors imperiled by the earthquake and subsequent disruptions in the power supply that the reactors use for cooling systems. One nuclear worker was killed, at least six were injured and two were missing at the plants in the aftermath of Friday's 8.9 magnitude earthquake and the blast Saturday afternoon, according to the Tokyo Electric Power Co., which operates the Fukushima I and II nuclear power stations. The company said it was taking steps to relieve pressure that has built up in seven of the plants' 10 reactor containment vessels. It said this would be done through a "partial discharge of air containing radioactive materials.