ChildLine. We want to make sure everyone can access the information provided on this site We've put together a few tips and help for you. 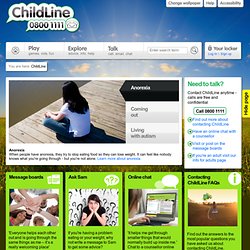 Please send us a message if you can't find what you're looking for. Or you have a suggestion of something we could include. Using the keyboard instead of the mouse.As well as using the tab key to navigate through the screen, the ChildLine website has special access keys: Alt+S = skip navigationAlt+1 = homeAlt+0 = accessibility information. Is the text size too large or too small? In Internet Explorer, go to View > Text size and select your desired text size setting (eg, larger, smaller). Kids Helpline - 1800 55 1800. Metropolitan Police Service - Safe. Text Someone » Bullying Reporting System » Contact Group. Bullying UK - Part of Family Lives, Help and support for the nation. WEBSITES ON BULLYING. 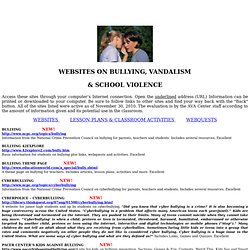 Open the underlined address (URL) Information can be printed or downloaded to your computer. Be sure to follow links to other sites and find your way back with the "Back" button. All of the sites listed were active as of November 30, 2010. The evaluation is by the AVA Center staff according to the amount of information given and its potential use in the classroom. Anti-Bullying Alliance. 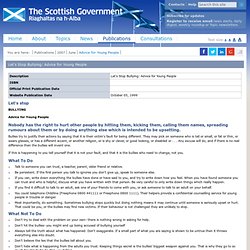 Bullies try to justify their actions by saying that it is their victim's fault for being different. They may pick on someone who is tall or small, or fat or thin, or wears glasses, or has a different accent, or another religion, or is shy or clever, or good looking, or disabled or . . . Any excuse will do, and if there is no real difference then the bullies will invent one. If this is happening to you tell yourself that it is not your fault, and that it is the bullies who need to change, not you. What To Do Talk to someone you can trust, a teacher, parent, older friend or relative.Be persistent. What Not To Do. Anti-Bullying Network. Home - Cyberbullying Research Center. Cyberbullying. What is cyberbullying? 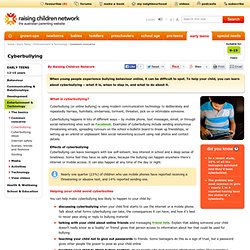 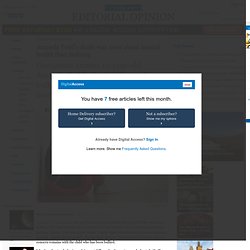 She was being bullied. The response from the government is the need for more education regarding bullying. I agree. Take aim at the bullies. Charge them with criminal offences whenever possible. I don’t understand why Amanda’s mental illness has been given such short shrift. I have read the papers and the blogs and listened to the news. That’s great. I have a mental illness. Amanda was a textbook case study of depression. Mental illness is not a death sentence.

I spoke to mental health care workers and social workers who talked about the stresses on children today, especially the problems with cyber-bullying and the experts all told me the importance of recognizing signs and symptoms of mental illness — depression — in our young people and accessing care immediately. Amanda was at the point where she would not leave her home because of her anxiety.

Perhaps the problem was lack of space. Amanda Todd: Bullied Canadian Teen Commits Suicide After Prolonged Battle Online And In School. Amanda Todd, a Vancouver-area teenager who posted a story to YouTube last month about being cyber-bullied, was found dead Wednesday night in Coquitlam, Canada. 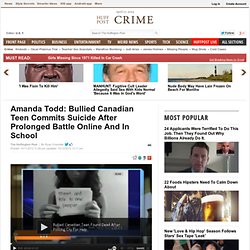 Authorities believe she committed suicide. Amanda's video tells a heart-wrenching story of the bullying she was subjected to -- both online and off. "In 7th grade," she begins, sharing her message on cue cards, "I would go with friends on webcam [to] meet and talk to new people. " At one point, a stranger flattered her into flashing the camera. One year later, a man contacted her on Facebook, threatening to send around the picture of her topless "if [she] don't put on a show. " Amanda Todd: Anonymous names man who drove teen to kill herself for spreading nude pictures. Amanda Todd, 15, killed herself on October 10, just five weeks after she detailed her treatment by cyber bullies in emotional YouTube videoMan 'blackmailed teenage girls on the internet and used "jailbait" websites'Sparks concerns over hacking group's power to create 'trial by internet'Police investigation underway and they are 'aware' of the claims By Lydia Warren and Meghan Keneally Published: 14:00 GMT, 16 October 2012 | Updated: 17:54 GMT, 16 October 2012. 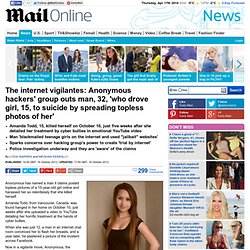 Amanda Todd: learning the lessons. I was deeply saddened by the Amanda Todd bullying saga that culminated in her suicide. 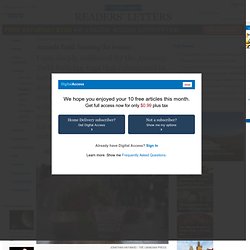 Tragically, the bullying of minors both in the real and cyber worlds is in general poorly addressed within our society despite the irreparable emotional and physical harm sustained by its immature victims that results. Vulnerable minors are simply not capable of fully understanding the kinds of demented predators who lurk in cyberspace nor how dangerous interacting with them can be. Laws must be strengthened to prevent the malicious slander of minors and police resources must directed to catch pedophiles who encourage and distribute child pornography. Concerning the bullying from Amanda’s peers, we must also realize that by not calling out and punishing bullies early on in their social development, we risk enabling a far worse problem when they mature as they may become the violent criminals of tomorrow.

Dr. Abby's Story - A Bullying Story. My Suicide Story (Hannah Novak) My story, Inspired by Amanda Todd. Newsbeat - Amanda Todd: Memorial for teenage cyberbullying victim. 17 October 2012 Last updated at 14:51 Share Tributes from across the world are being paid to a 15-year-old girl from Canada who killed herself after being bullied online. 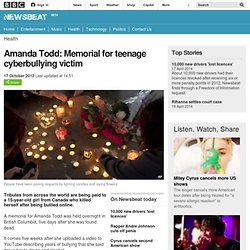 A memorial for Amanda Todd was held overnight in British Columbia, five days after she was found dead. It comes five weeks after she uploaded a video to YouTube describing years of bullying that she said drove her to drugs and alcohol. In the nine-minute video she told her story with a set of handwritten notes. The recording, described as "haunting", showed the cheerleader going into detail about what happened to her. Nobody Likes a Bully - How to Stop Bullying in Schools - Deal with Bullies - Why Do I Bully Prevent. Anti-Bullying week Cyber Bullying video. Suicide - Getting help. If you are reading this because you are having suicidal thoughts, try to ask someone for help. It may be difficult at this time, but it's important to know you are not beyond help and you are not alone. Talking to someone can help you see beyond feelings of loneliness or despair and help you realise there are options.

There are people who want to talk to you and who want to help. Try talking to a family member or friend about how you are feeling. There are several telephone helplines you can call at any time of the day or night. Stop child abuse - support the children’s charity - the NSPCC. Amanda Todd's Final Video (4 Hours Before Death# Kidpower Personal Safety: Prevent Violence, Bullying & Abuse. Fixers - Young people fixing the future. StopBullying.gov. Cyberbullying. Thinkuknow - home. Teen Depression: Guide for Parents—Learn the Signs and How You Can Help Your Teen. Understanding teen depression There are as many misconceptions about teen depression as there are about teenagers in general. 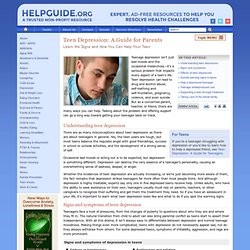 Yes, the teen years are tough, but most teens balance the requisite angst with good friendships, success in school or outside activities, and the development of a strong sense of self. Occasional bad moods or acting out is to be expected, but depression is something different. Depression can destroy the very essence of a teenager’s personality, causing an overwhelming sense of sadness, despair, or anger.

RuneScape – MMORPG – Free Online Fantasy Adventure Game. Bin Weevils. Bin Weevils is a fun virtual world for kids where you can play free online games, chat with friends, adopt a virtual pet, grow your own garden, watch cartoons and much more! Waddle around and meet new friends. Adopt your own pet monster and join the Moshi fun! - Moshi Monsters.