All posts tagged 'dwell magazine' 1 August 2011 06:44 English | PDF | 140 pages | 56.3MB Dwell is the unique modern architecture and design magazine for people who believe that good design is an integral part of real life. 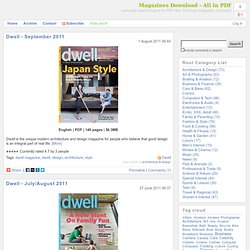 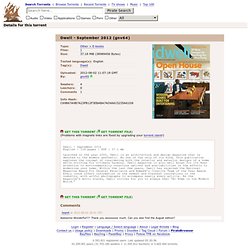 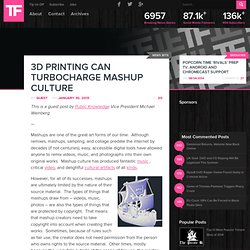 Although remixes, mashups, sampling, and collage predate the internet by decades (if not centuries), easy, accessible digital tools have allowed anyone to remix videos, music, and photographs into their own original works. Mashup culture has produced fantastic music , critical video, and delightful cultural artifacts of all kinds. However, for all of its successes, mashups are ultimately limited by the nature of their source material. The types of things that mashups draw from – videos, music, photos – are also the types of things that are protected by copyright. Enter 3D printing. 20 Best Websites To Download Free EBooks. 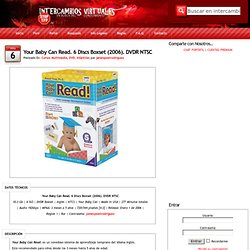 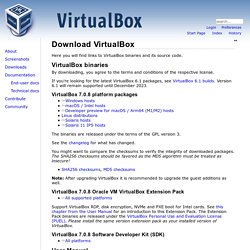 Top 10 Most Popular Torrent Sites of 2012. Continuing a long-standing New Year's tradition, we present an up-to-date list of the world's most visited BitTorrent sites. 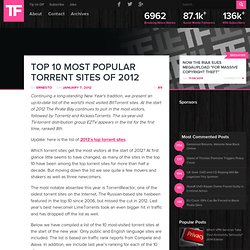 At the start of 2012 The Pirate Bay continues to pull in the most visitors, followed by Torrentz and KickassTorrents. The six-year-old TV-torrent distribution group EZTV appears in the list for the first time, ranked 8th. Update: here is the list of 2013′s top torrent sites. 5 Alternatives to The Pirate Bay. With all this activity surrounding the DDOS attacks and the blocking of Swedish BitTorrent website The Pirate Bay in some countries, we decided to look the 5 best alternatives to the The Pirate Bay. 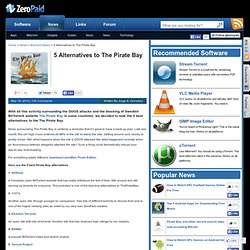 News surrounding The Pirate Bay is certainly a reminder that it’s great to have a back-up plan. Late last month, the UK High Court ordered all ISPs in the UK to block the site. Getting around such blocks is pretty trivial. Are There Any Demonoid Alternatives? Demonoid is gone, at least for now. 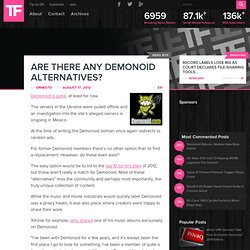 The servers in the Ukraine were pulled offline and an investigation into the site’s alleged owners is ongoing in Mexico. At the time of writing the Demonoid domain once again redirects to random ads… For former Demonoid members there’s no other option than to find a replacement. Torrent News, Torrent Sites and the latest Scoops. Demonoid Faces Prolonged Downtime After DDoS Attack. A severe DDoS attack has brought down one of the most famous BitTorrent trackers. 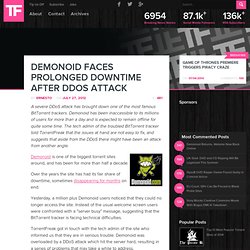 Demonoid has been inaccessible to its millions of users for more than a day and is expected to remain offline for quite some time. The Pirate Bay ‘Moves’ to North Korea (Updated) The Pirate Bay says it has been offered virtual asylum in North Korea. 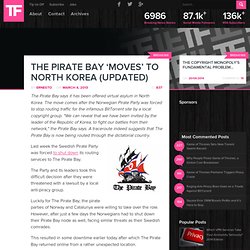 The move comes after the Norwegian Pirate Party was forced to stop routing traffic for the infamous BitTorrent site by a local copyright group. "We can reveal that we have been invited by the leader of the Republic of Korea, to fight our battles from their network," the Pirate Bay says. Game of Thrones (2011– ) - Episodes. Game of Thrones Pirates Break BitTorrent Swarm Record. With a million downloads on BitTorrent in less than a day, the season premiere of Game of Thrones is breaking records on multiple fronts. Never before has there been a torrent with so many people sharing a file at the same time, more than 160,000 simultaneous peers. Data gathered by TorrentFreak further shows that Australia has the highest piracy rate of the popular download destinations, while London tops the list of pirate cities.

The Pirate Bay Moves Servers to the U.S., Becomes Freedom Bay. After trying its luck to North Korea, the world's largest BitTorrent tracker, The Pirate Bay, has announced it has moved its servers to the U.S. "We have worked closely with the awesome american government to establish a strong military graded server park that will endure any nuclear attacks that Kim Jong Un and his evil allies will send at US," writes The Pirate Bay in a blog post.

The prosecutor claimed the four worked together to administer, host, and develop the site and thereby facilitated other people's breach of copyright law. Some 34 cases of copyright infringements were originally listed, of which 21 were related to music files, 9 to movies, and 4 to games. One case involving music files was later dropped by the copyright holder who made the file available again on the website of The Pirate Bay.

In addition, claims for damages of 117 million kronor (US$13 million) were filed.[4] The case was decided jointly by a professional judge and three appointed lay judges.[5] The trial started on 16 February 2009 in the district court (tingsrätt) of Stockholm, Sweden. The Pirate Bay[edit] Police raid on The Pirate Bay[edit] Piggymoo - A relic from the past. Cómo buscar archivos compartidos en rapidshare, megaupload, mediafire … Bit Che - Torrent Search. Bit Che is a framework and script language for searching Bit Torrent websites and search engines for torrents. Bit Che uses user submitted and customized script files which allows it to quickly search lots of torrent websites and easily organizes the results.