Update on Ageing Better Innovation – look to apps and connectors. Here’s an update on my exploration into how digital innovation may help support personal well-being, and services for ageing better. 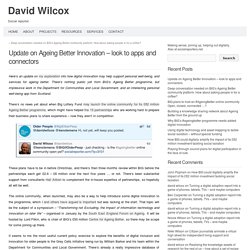 There’s nothing public yet from BIG’s Ageing Better programme, but impressive work in the Department for Communities and Local Government, and an interesting personal well-being app from Scotland. There’s no news yet about when Big Lottery Fund may launch the online community for its £82 million Ageing Better programme, which might have helped the 15 partnerships who are working hard to prepare their business plans to share experience – now they aren’t in competition. These plans have to be in before Christmas, and there’s then three months review within BIG before the partnerships each get £2.6 – £6 million over the next five years … or not. There’s been substantial support from consultants Hall Aitken to complement the in-house expertise of partnerships, so hopefully all will be well. Provocative generalisations follow … Trading Times announces 'The Age of No Retirement?' (and our crowdfunding campaign)

We are taking centre stage in one of the most exciting social, cultural and economic shifts of our time – to ensure that across the UK we take full advantage of a society in which people are living longer, healthier and more productive lives than ever before. 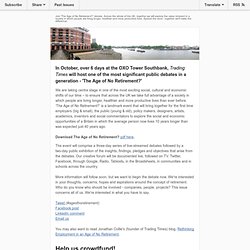 ‘The Age of No Retirement?’ Is a landmark event that will bring together for the first time employers (big & small), the public (young & old), policy makers, designers, artists, academics, inventors and social commentators to explore the social and economic opportunities of a Britain in which the average person now lives 10 years longer than was expected just 40 years ago. Download The Age of No Retirement? Our National Work. Home » National Work » Looking Forward To Later Life Looking Forward To Later Life Unprecedented increases in life expectancy over the last century have not been matched with a clear understanding, across society, of what we expect from our newfound older age. 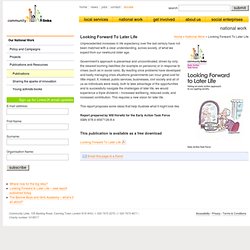 Government’s approach is piecemeal and uncoordinated, driven by only the clearest looming liabilities (for example on pensions) or in response to crises (such as in social care). By reacting once problems have developed and badly managing crisis situations governments can incur great cost for little impact. Participle (weareparticiple)... Older people lack digital skills to access new health services. Older people are the biggest users of health and care services, with the average NHS spend for retired households nearly double that for non-retired households. 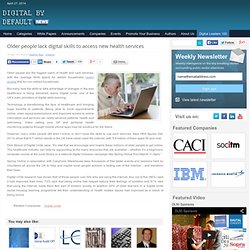 But many lack the skills to take advantage of changes in the way healthcare is being delivered, warns Digital Unite, one of the UK’s main providers of digital skills learning. Technology is transforming the face of healthcare and bringing huge benefits to patients. Www.nominettrust.org.uk/sites/default/files/NT PP4 Exploring The Potential Of Digital Technology In Later Life FINAL 0813.pdf.

Digital technology for a better later life - home. Transitions across (later) life. At this point of the year, we expected to launch a new funding programme looking at how we can enable older people to benefit from using digital technology. 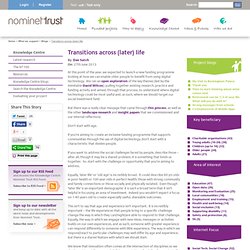 We ran an open exploration of the key themes (led by the inimitable David Wilcox); pulling together existing research, practice and funding activity and aimed, through that process, to understand where digital technology could be most useful and, as such, where we should target our social investment fund. Boomers dive into social media - Andrea Coombes' Working Retirement. 97 Ideas for Healthy Aging: Get Involved. Right now, more than 500 people are busy brainstorming for specific answers to the question “How might we all maintain wellbeing and thrive as we age?” 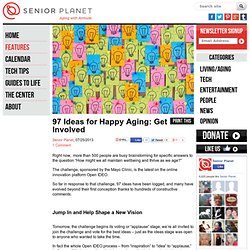 The challenge, sponsored by the Mayo Clinic, is the latest on the online innovation platform Open IDEO. Dtlater's social stories. Services for Later Life 2012. Granny IT Guru Final Take. Online access: reaching people is about more than money. The government's digital strategy is on track it seems, and every department, from justice to transport, is intent on making online its default option. 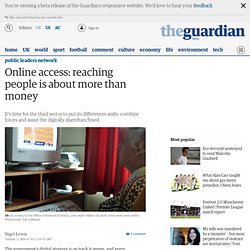 No one could fail to be impressed by the potential economic benefits, forecast to be some £1.2bn by 2015, simply by switching everyday interactions to the internet. But how much thought is being given to the digitally disenfranchised? According to the Office for National Statistics, more than 8 million UK adults (about 16% of the population) have never been online, and many are older, disabled, socially isolated and geographically remote. The approach of Cabinet Office minister Francis Maude to assisted digital as part of the government's digital strategy is certainly a step in the right direction, but the practical ways in which access to digital services is to be co-ordinated is still far from clear.

Summary and update on our digital tech later in life exploration. A project from the ageing & innovation team in Nesta's Public Services Lab. Can online innovations enhance social care? By: shirley_ayres On: 7th February 2013 There has been considerable debate about the role of digital technology in social care. 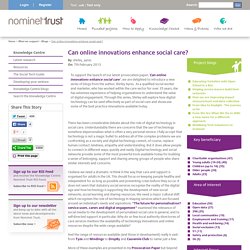 Understandably there are concerns that the use of technology somehow depersonalises what is often a very personal service. I fully accept that technology is not a magic bullet to address all of the complex problems we are confronting as a society and digital technology cannot, of course, replace human contact, kindness, empathy and understanding. But it does allow people to connect in different ways, quickly and easily. NESTA provides a framework for innovation towards a better later life. View larger version of this graphic from NESTA. 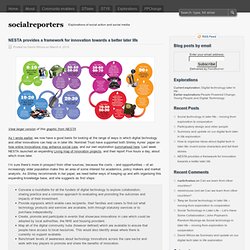 Major boost to innovations that support social action - Press release. Five innovative programmes that get volunteers involved in solving some of the biggest social challenges – from combatting isolation in old age to helping young people get jobs – will receive follow-on funding from the Innovation in Giving Fund. 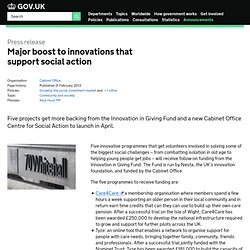 The Fund is run by Nesta, the UK’s innovation foundation, and funded by the Cabinet Office. The five programmes to receive funding are: Care4Care: a membership organisation where members spend a few hours a week supporting an older person in their local community and in return earn time credits that can they can use to build up their own care pension. Pupils help elderly become Silver Surfers. Feb 20 2013 by Sandy Kilpatrick, Dumfries & Galloway Standard The PC brigade at St Joseph’s College are bridging the generation gap by helping older people get online.

The school’s Silver Surfers project has given pensioners the skills for everything from mastering Google and sending emails, to making video calls over a webcam. Religious education classmates have been tutoring several retired Doonhamers in one-on-one sessions. Doreen Logan, 66, started the class as a beginner but is now fully capable of browsing online herself.

She responded to the school after hearing about the course in the Standard. Social Savvy Seniors Have Higher Self-Esteem. Older adults are not immune from the flood of technology in today's world — and they're eager to get onboard. A growing number of senior citizens, as well as tech entrepreneurs, are seeing technology as a tool to enrich their lives as they reach old age. Technology plays an increasingly important role in helping older adults maintain and improve mental and emotional well-being. Associate Professor of Psychology T.J. Tackling social isolation by getting older people online. International Longevity Centre - UK. Older people and the internet 20 June 2011 This think-piece by Richard Berry develops a ‘system map’ of digital exclusion Older people are significantly less likely to have access to the internet than the general population.

According to recent research findings, 79 per cent of households below the state pension age have internet access, while only 37 per cent of households above the state pension age do so. This difference gives rise to the notion of the ‘digital divide’, between those who enjoy access to the internet and those who are excluded. There have been a number of attempts to widen access to the internet, among older people and other excluded groups. It is important that policy is clearly focused on the proven causes of digital exclusion. Www.demos.co.uk/files/File/Web_I_m_64.pdf. Is age really the issue in later life? Developing integrated care for an ageing population. “The Disruptive Social Care Podcast” Episode 3 – Webcast.