Photographer Uses His Own Nude Body To Create Surreal Worlds. Arno Raffael Minkkinen, a photographer based on the East Coast in the U.S., has spent the last 40 years creating surreal self-portrait photos in which his nude body becomes an element of the landscapes that surround him. 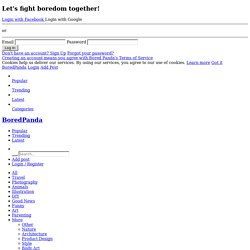 Behance. Look Through The Eyes Of Famous Artists. During a trip longer than 4,000 miles, I visited twenty-two cities, three countries and ten great masters in roughly three months; I have then decided to conclude this research with a series, to tell their surprising, funny and unbelievable tales thanks to ten pictures as seen from the artists’ point of view, allowing us to witness with their own eyes as if we could record that particular moment with one single snap. 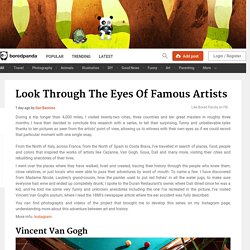 From the North of Italy, across France, from the North of Spain to Costa Brava, I’ve travelled in search of places, food, people and colors that inspired the works of artists like Cezanne, Van Gogh, Goya, Dalì and many more, visiting their cities and rebuilding anecdotes of their lives. I went over the places where they have walked, lived and created, tracing their history through the people who knew them, close relatives, or just locals who were able to pass their adventures by word of mouth. More info: Instagram Vincent Van Gogh Francisco Goya Henry De Toulouse-Lautrec. Wanderer on Behance. Beguiling Portraits Capture Women of a Certain Age in Manhattan and Beverly Hills. Untitled Jan Elaine For Pentimento, New York City-based photographer Tirzah Brott tracks down older ladies as they pass by on the streets of Manhattan and Beverly Hills, following in the wake of classic perfume and a flurry of tweed coats. 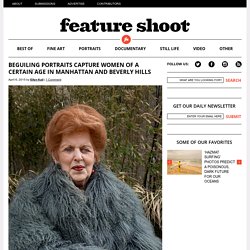 Although the photographer was initially inspired by notions of vanity and faded youth, she soon discovered that something far more glittering and fine lay within the glamorous older women she encountered. Watch Alec Soth and Stacey Baker Show What Enduring Love Looks Like. Miniature Landscapes Submerged in Tiny, Delicate Crystals. Incident Canopy. 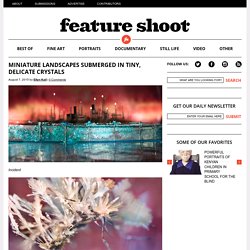 The Delightfulness of Playgrounds, As Seen from Above. Designs for a tarot deck celebrating black stars and overseen by Jodorowsky. It’s hard to resist any project that involves a tarot Tina Turner and surrealist filmmaking legend Alejandro Jodorowsky. 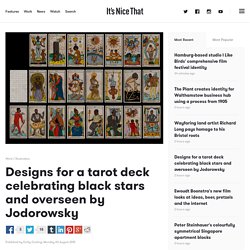 And so we present the Black Power Tarot, a deck of tarot cards illustrated by Belfast-based graphic designer Michael Eaton. The deck is based on the Tarot De Marseille but is made up of black musicians, comedians, activists and people of note, and was created by the musician King Khan. In a rather incredible twist, the project was overseen by Alejandro Jodorowsky, whose son is friends with King Khan. Big names aside, the pack is a triumph, showing an illustration sensibility that works superbly for its purpose with striking colours and defined line work. 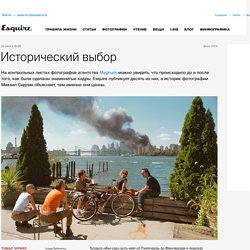 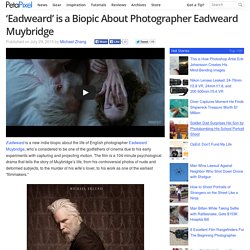 Andy Warhol's Celebrity Polaroids Are Better Than Your Instagrams. Advertisement People document everything these days. 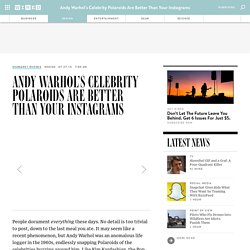 No detail is too trivial to post, down to the last meal you ate. It may seem like a recent phenomenon, but Andy Warhol was an anomalous life logger in the 1960s, endlessly snapping Polaroids of the celebrities buzzing around him. Lens.blogs.nytimes. Surf pictures are traditionally studies in motion — a figure in the spray of a cutback or under the curl of a jewel-toned barrel. 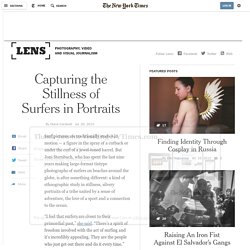 But Joni Sternbach, who has spent the last nine years making large-format tintype photographs of surfers on beaches around the globe, is after something different: a kind of ethnographic study in stillness, silvery portraits of a tribe united by a sense of adventure, the love of a sport and a connection to the ocean.

“I feel that surfers are closer to their primordial past,” she said. “There’s a spirit of freedom involved with the act of surfing and it’s incredibly appealing. They are the people who just get out there and do it every time.” To see the full article, subscribe here. Film Producer. Delicate Pencil Lead Sculptures Carved by Salavat Fidai. Starting with carpenter and art pencils containing thick leads, Russian artist Salavat Fidai uses an X-ACTO knife to carve miniature renderings of hands, buildings, and various characters from pop culture. 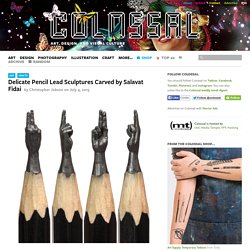 The delicate process requires a good understanding of how much pressure the lead can withstand, but even then mistakes are inevitable. The Ufa-based artist is fascinated by all things miniature, and also paints on seeds and matchboxes. Watch the timelapse below to see his process for carving an entire replica of the Eiffel Tower. Why People Like, Share, and Comment on Facebook [Infographic] "We're different, there's no-one else like us in the marketplace. " "As soon as people use our product, they'll want to buy.

" "Our product is so good it sells itself. " When you're a marketer who works closely with companies in the SaaS/cloud technology space, you get used to hearing these phrases. Every emerging SaaS business is passionate about its product and convinced it has exactly what the market needs. These businesses also buy into the widely accepted wisdom about the SaaS sales process, which goes something like this: it's much shorter and more transactional than traditional software sales, customers are ready to buy 'off the page' without the involvement of a salesperson, they just want to test out the product and then get started. An illustration by Tom Gauld with 479,001,600 different possibilities. “Myriorama” might have just overtaken “zootrope” as our favourite word, and for that we’ve got illustrator Tom Gauld to thank. We’re also expressing our gratitude for his Endless Journeys creation – itself a myriorama – which in 21st Century parlance is a series of illustrated cards that can be arranged in thousands of different ways to form numerous visual narratives.

Endless Journey clocks up a whopping 479,001,600 different landscapes, formed from 12 beautifully illustrated cards. Illustration and Design. Spanish studio Muokkaa creates these jazzy Memphis-inspired set of numbers. Numbers are fascinating things. While we have different words for them all over the world, the basic form and structure of these mathematical symbols is universal. Showing a bit of love for the number is Muokkaa Studio AKA Alex López Becerro, with his series of Memphis-inspired numbers for Spanish magazine Yorokobu and their annual calendar. A fabulous mix of primary shades and pastel hues, these creations are all 3D renders but start as sketches on paper. “Once I have an idea that I think will work, I start working on the computer. 37 Ethereal Almost Supernatural Long Exposure Photographs. Analog Flipboard Displays Your Digital Stats. Flipboards, those hypnotic relics of an analog age, are making a coming back. The latest example, now on Kickstarter, conveys anything from your Twitter followers to your company's beta countdown as a clicking susurrus of flipping cards.

The Miot is a wooden box that emulates the old departure boards in railway stations. And it works basically the same way: with six cards, each of which tumbles over itself to reveal a given character or number. The main distinction is the information it displays. One of the central ideas behind Miot is that you should be able to use it to display any information you want.

Try Reading This Font And You'll Better Understand What Dyslexia Is Like. Good font design can't cure dyslexia. But it can raise awareness. In his last year as a student at the London School of Communications, designer Daniel Britton was diagnosed with dyslexia. When Britton told his classmates and teachers about his diagnosis though, they just stared at him. They thought he was stupid. Potholes Tweeted At Panama City's Government Until They Got Fixed. Panama City has one of the fastest growing economies in Central and South America. A construction boom has given the city one of the greatest concentrations of skyscrapers in the world. Cool Hunting - CH Video: The International Banana Museum. A Cardboard Room In A Box You Can Set Up In 10 Minutes. 3 Weird Optical Illusions Inspired These Lovely Home Objects. Everyone loves a good optical illusion. Instagram artist uses everyday objects to bring drawings to life.

'The Last Photo Project' Asks Residents of Chicago to Reveal the Most Recent Shot on their Camera Phones. Lab-grown materials form objects for Vivorium lifestyle concept. New York designer Ali Schachtschneider has imagined a future in which biologically grown materials are used to create furniture, garments and tools that would become "extensions of the body". Meet the Afghan Photographers Telling Their Country's Stories. Lake Michigan is So Clear Right Now its Shipwrecks Are Visible From the Air. Autochromes - Dawn of Colour.

Blog. Bizarre and vulgar illustrations from illuminated medieval manuscripts. Nan Goldin On the Beauty of Childhood. Why does our Instagram generation think its snaps are so special? Modern day scenes traditionally illustrated by Janne Iivonen. Tough Guy 2015. Portraits of Heterosexual Cross-Dressers Having a Ball in the 1950s. The 10 Best Daredevil Rooftopping Photos. This Crazy Living Wall With 1,682 Plants Has A Hidden Message. A Skeptical Designer. 40 Side-By-Side Photos Of Parents And Kids That Will Have You Seeing Double. When Nature And Geometry Collide, These Photos Get Surreal. Photos Of Damascus, Syria, From 1965. World War I Soldiers Played Soccer On Christmas. Wanted. An American Odyssey: First colour postcards of the 'New World' A Terrifying Video Collage Taken From One Day Of News Images.

Hand-Grown Murals: Watch as Plant Paintings Take Over Walls. Heirloom: A Tablecloth Created with Lace-like Patterns of Collected Seeds by Rena Detrixhe. GeltFiend is here, because Jews get cold too, and it's time for us to look fancy. Holiday fancy. Magnesium Whispers Shouted at Sentinel Skies.