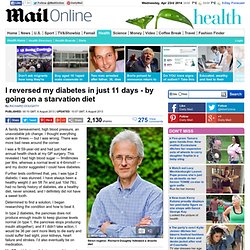 Why fasting bolsters brain power: Mark Mattson at TEDxJohnsHopkinsUniversity. New Research Shows Poorly Understood “Leaky Gut Syndrome” Is Real, May Be the Cause of Several Diseases. Russian spy-watcher Andrei Soldatov on Snowden’s strange behavior in Russia, the Nemtsov assassination, and signs of a power struggle in Putin’s inner circle. 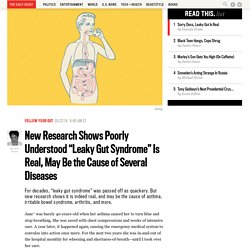 Andrei Soldatov’s beat is Russian spies, which is a hot topic for a new cold war. As editor of agentura.ru, an online “watchdog” of Putin’s clandestine intelligence agencies, he has spent the last decade reporting on and anatomizing the resurrection of the Russian security state, from KGB-style crackdowns on dissent at home to adroit or haphazard assassinations abroad. Most recently, Soldatov and his coauthor and collaborator Irina Borogan broke serious news about the extent to which the Federal Security Service (FSB) was surveilling and eavesdropping on everyone within slaloming distance of the 2014 Sochi Winter Olympics. 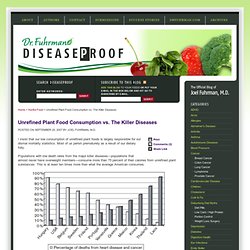 I insist that our low consumption of unrefined plant foods is largely responsible for our dismal mortality statistics. Most of us perish prematurely as a result of our dietary folly. Populations with low death rates from the major killer diseases—populations that almost never have overweight members—consume more than 75 percent of their calories from unrefined plant substances. Human Ancestors Were Nearly All Vegetarians. What if It's All Been a Big Fat Lie? Mark's Daily Apple. Bulletproof Diet. Nom Nom Paleo. What's Behind 'Grain Brain': Are Gluten and Carbs Wrecking Our Brains and Our Health? Photo Credit: Gayvoronskaya_Yana/ Shutterstock.com November 20, 2013 | Like this article? 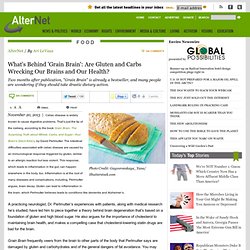 Join our email list: Stay up to date with the latest headlines via email. Celiac disease is widely known to cause digestive problems. The Basic Diet (What I Can Eat) - Gluten-Free Living. - Gluten Free School. Dr. Terry Wahls’ TedTalk on Treating MS Through Diet » Paleo Hot Mess. It occurred to me this week that I hadn’t yet posted the video clip that inspired me to go back on the Paleolithic Diet when my symptoms returned earlier this year, which is a real shame, as it is a major eye opener! 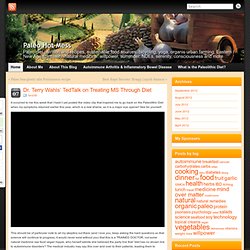 A new experiment: Dr Wahls' super-nutrient paleo diet, 9 cups veggies a day. I’ve just finished reading “Minding My Mitochondria: How I overcame secondary progressive multiple sclerosis” By Terry Wahls, MD If you haven’t already see the viral video of Dr Wahls talking about her reversal of Multiple Sclerosis, you must, it is inspiring. 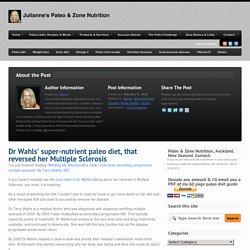 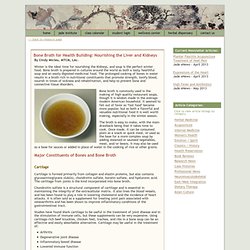 Winter is the ideal time for nourishing the Kidneys, and soup is the perfect winter food. Bone broth is prepared in cultures around the world as both a tasty, healthful soup and an easily digested medicinal food. The prolonged cooking of bones in water results in a broth rich in nutritional constituents that promote strength, tonify blood, nourish in times of sickness and rehabilitation, and help to prevent bone and connective tissue disorders. Raw-food revolution: beyond carrot sticks. If the thought of a raw-food diet conjures up images of bland greens and handfuls of nuts and seeds, then it may be time to re-imagine the possibilities of raw food. 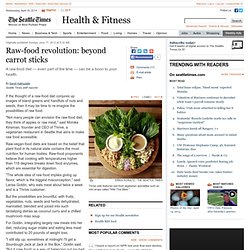 "Not many people can envision the raw-food diet; they think of apples or raw meat," said Monika Kinsman, founder and CEO of Thrive, a vegetarian restaurant in Seattle that aims to make raw food accessible. Raw-vegan-food diets are based on the belief that plant food in its natural state contains the most nutrition for human bodies. Raw-food proponents believe that cooking with temperatures higher than 118 degrees breaks down food enzymes, which are essential for digestion. "The whole idea of raw food implies giving up flavor, which is the biggest misconception," said Larisa Goldin, who eats meat about twice a week and is a Thrive customer. For Goldin, integrating largely raw meals into her diet, reducing sugar intake and eating less meat contributed to 20 pounds of weight loss.

Dr. Weil's Anti-Inflammatory Food Pyramid. Raw Food Not Enough to Feed Big Brains. Eating a raw food diet is a recipe for disaster if you're trying to boost your species' brainpower. 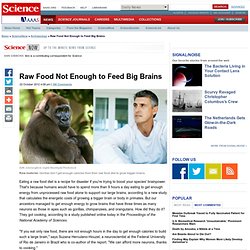 That's because humans would have to spend more than 9 hours a day eating to get enough energy from unprocessed raw food alone to support our large brains, according to a new study that calculates the energetic costs of growing a bigger brain or body in primates. But our ancestors managed to get enough energy to grow brains that have three times as many neurons as those in apes such as gorillas, chimpanzees, and orangutans. How did they do it? They got cooking, according to a study published online today in the Proceedings of the National Academy of Sciences. "If you eat only raw food, there are not enough hours in the day to get enough calories to build such a large brain," says Suzana Herculano-Houzel, a neuroscientist at the Federal University of Rio de Janeiro in Brazil who is co-author of the report. 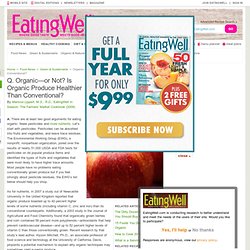 There are at least two good arguments for eating organic: fewer pesticides and more nutrients. Let’s start with pesticides. Pesticides can be absorbed into fruits and vegetables, and leave trace residues. 45 Healthy Foods to Make and Never Buy Again. Dom's Kefir-cheese in-site. Blue, Brie and Camembert cheese types including a cross between these mold types made from kefir is quite simple. Such cheese can be prepared with Kefir-Leban, as a 100% kefir base explained above, which is pressed, inoculated and incubated to mature the cheese.

Organic vs. Conventional Nutrition Table. OrganicT30J09.pdf (application/pdf Object) How ‘certified organic’ went corporate. Michael J. Potter is one of the last little big men left in organic food. Eden Foods is one of the last independent organic food producers in an industry dominated by large corporations. Super Food Pyramid. 72 YEAR OLD VEGAN SHOWS LITTLE TO NO SIGNS OF AGING -FOX NEWS. Five Tricks I Used to Beat My Unhealthy Eating Habits. How To Get In Shape Using Psychology: 6 New Tricks From Research. Why There's So Much Confusion Over Health and Nutrition. Top 11 Biggest Lies of Mainstream Nutrition.

Real Food. The Equinox Nutritional Philosophy. What Are ‘Natural’ Foods? "What foods are alkaline foods" Almost all foods that we eat, after being digested, absorbed, and metabolised, release either an acid or an alkaline base (bicarbonate) into blood. Grains, fish, meat, poultry, shellfish, cheese, milk, and salt all produce acid. The mass consumption of these foods have caused our bodies to become overly acidic, which strips it of minerals. Over the long haul, those who do not balance their diet with alkaline foods (vegetables and fruits, primarily) become prone to weak bones, joints and muscles, heart disease, diabetes, kidney disease, and a host of other health problems.

Nutrition facts, calories in food, labels, nutritional information and analysis – NutritionData.com. List of Supplements on Examine.com. Vitamin B.S. Nutrient Recommendations. Reports and tables from the Institute of Medicine. Top 10 Food Infographics to Hang in Your Kitchen or Save to Your Phone. Color Wheel of Fruits and Vegetables. This Color-Coded Chart Helps You Pick the Most Nutritious Produce. 17 Must-See Food Documentaries. Forks Over Knives - Official Trailer.