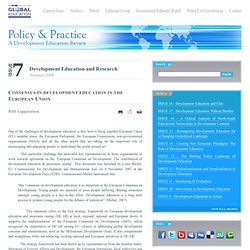 This particular challenge has motivated key representatives in these organisations to work towards agreement on the ‘European Consensus on Development: The contribution of development education & awareness raising’. This document was launched by Louis Michel, EU Commissioner for Development and Humanitarian Aid, on 9 November 2007 at the European Development Days (EDD). Commissioner Michel announced that: DE_Watch. DEEEP welcomes EP Declaration. "Development education and active global citizenship can provide the skills, knowledge, values and competences to face today's challenges and to make a positive contribution to the future of Europe and the world. 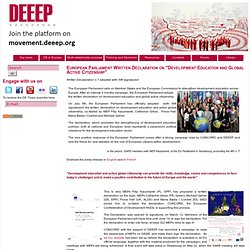 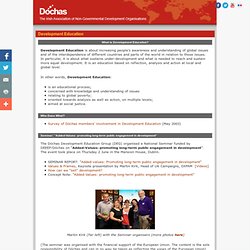 Development Education is about increasing people's awareness and understanding of global issues and of the interdependence of different countries and parts of the world in relation to those issues. In particular, it is about what sustains under-development and what is needed to reach and sustain more equal development. It is an education based on reflection, analysis and action at local and global level.

In other words, Development Education: is an educational process; concerned with knowledge and understanding of issues relating to global poverty; oriented towards analysis as well as action, on multiple levels; aimed at social justice. Who Does What? Survey of Dóchas members' involvement in Development Education (May 2003) Seminar: “Added-Values: promoting long-term public engagement in development” Martin Kirk (Far left) with the Seminar organisers (more photos here) Funding Opportunities. Irish Aid - Grants - Development Education.

What is Development Education funding? 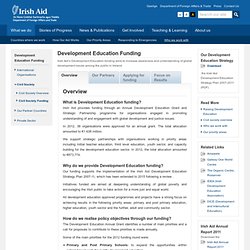 Irish Aid provides funding through an Annual Development Education Grant and Strategic Partnership programme for organisations engaged in promoting understanding of and engagement with global development and justice issues. In 2012, 38 organisations were approved for an annual grant. The total allocation amounted to €1.638 million. We support strategic partnerships with organisations working in priority areas including Initial teacher education, third level education, youth sector, and capacity building for the development education sector. In 2012, the total allocation amounted to €873,774. Why do we provide Development Education funding? Our funding supports the implementation of the Irish Aid Development Education Strategy Plan 2007-11, which has been extended to 2015 following a review .

Initiatives funded are aimed at deepening understanding of global poverty and encouraging the Irish public to take action for a more just and equal world. IDEA. GENE - Global Education Network Europe. Development Education.ie. DevEd & The EU Consensus on Development. Higher Education for Dev. How do we communicate global poverty? 11/03/2012 at 3:51 pm By Hans Zomer One of the easiest ways of getting people in the “Development” sector to agree, is to start a conversation blaming “the media” for their misrepresentation of global development issues. 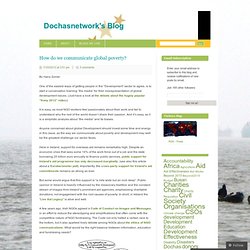 (Just have a look at the debate about the hugely popular “Kony 2012” video.) It is easy, as most NGO workers feel passionately about their work and fail to understand why the rest of the world doesn’t share their passion. And it’s easy, as it is a simplistic analysis about “the media” and its biases. Anyone concerned about global Development should invest some time and energy in this issue, as the way we communicate about poverty and development may well be the greatest challenge our sector faces. Here in Ireland, support for overseas aid remains remarkably high. But some would argue that this support is “a mile wide but an inch deep”. But the challenge is bigger than merely improving the way NGOs do their public communications.

Also have a look at: Like this: Like Loading... Critical Thinking. Communicating Complexity. Do aid agencies skew the debate? NGO Communications. Public attitudes to Development (Irl & abroad) Measuring the Impact of DevEd.