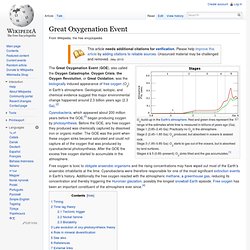 Stages 4 & 5 (0.85–present): O2 sinks filled and the gas accumulates.[1] Cyanobacteria, which appeared about 200 million years before the GOE,[3] began producing oxygen by photosynthesis. End-Ediacaran extinction: 542mya. Evidence suggesting that a mass extinction occurred at the end of the Ediacaran period, 542 million years ago, includes: A mass extinction of acritarchsThe sudden disappearance of the Ediacara biota and calcifying organisms;The time gap before Cambrian organisms "replaced" them. 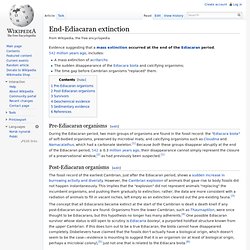 Pre-Ediacaran organisms[edit] During the Ediacaran period, two main groups of organisms are found in the fossil record: the "Ediacara biota" of soft-bodied organisms, preserved by microbial mats; and calcifying organisms such as Cloudina and Namacalathus, which had a carbonate skeleton.[1] Because both these groups disappear abruptly at the end of the Ediacaran period, 542 ± 0.3 million years ago, their disappearance cannot simply represent the closure of a preservational window,[2] as had previously been suspected.[1] Post-Ediacaran organisms[edit] 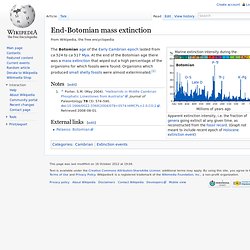 Cambrian–Ordovician extinction event: 488mya. The blue graph shows the apparent percentage (not the absolute number) of marine animalgenera becoming extinct during any given time interval. 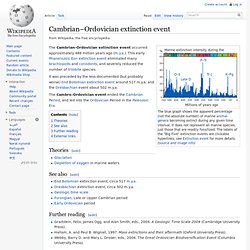 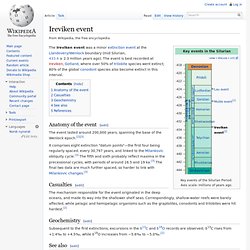 Axis scale: millions of years ago. The Ireviken event was a minor extinction event at the Llandovery/Wenlock boundary (mid Silurian, 433.4 ± 2.3 million years ago). The event is best recorded at Ireviken, Gotland, where over 50% of trilobite species went extinct; 80% of the global conodont species also become extinct in this interval. Mulde extinction event: 424mya : Anoxic. Key events in the Silurian Key events of the Silurian Period. 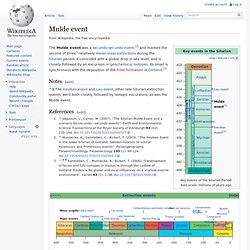 Axis scale: millions of years ago. The Mulde event was a secundo-secundo event,[3] and marked the second of three1 relatively minor mass extinctions during the Silurian period. It coincided with a global drop in sea level, and is closely followed by an excursion in geochemical isotopes. Its onset is synchronous with the deposition of the Fröel formation in Gotland.[3] Notes[edit] ^1 The Ireviken event and Lau event, other late Silurian extinction events, were both closely followed by isotopic excursions, as was the Mulde event. Lau extinction event: 420mya : Anoxic. Key events in the Silurian Key events of the Silurian Period. 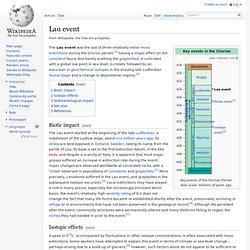 Axis scale: millions of years ago. The Lau event was the last of three relatively minor mass extinctions during the Silurian period,[3] having a major effect on the conodont fauna (but barely scathing the graptolites). It coincided with a global low point in sea level, is closely followed by an excursion in geochemical isotopes in the ensuing late Ludfordian faunal stage and a change in depositional regime.[4] Biotic impact[edit] Isotopic effects[edit] A peak in δ13C, accompanied by fluctuations in other isotope concentrations, is often associated with mass extinctions. Carboniferous Rainforest Collapse : 305mya. The Carboniferous rainforest collapse could have been the result of colder, drier climate Extinction patterns[edit] In the Carboniferous, the great tropical rainforests of Euramerica supported towering lycopsids, a heterogeneous mix of vegetation, as well as a great diversity of animal life: giant dragonflies, millipedes, cockroaches, amphibians, and the first reptiles. 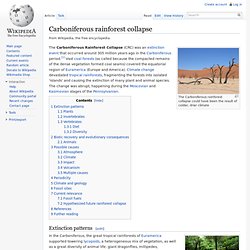 Plants[edit] The rise of rainforests in the Carboniferous greatly altered the landscapes by eroding low-energy, organic-rich anastomosing river systems with multiple channels and stable alluvial islands. The continuing evolution of tree-like plants increased floodplain stability by the density of floodplain forests, the production of woody debris, and an increase in complexity and diversity of root assemblages.[2] Collapse occurred through a series of step changes. 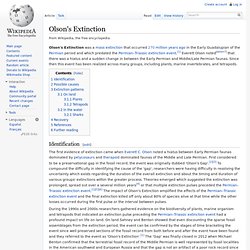 That there was a hiatus and a sudden change in between the Early Permian and Middle/Late Permian faunas. Since then this event has been realized across many groups, including plants, marine invertebrates, and tetrapods. Carnian Pluvial Event :230mya. The CPE in the Triassic Axis scale: millions of years ago The Carnian Pluvial Event (CPE) is a major global climate change and biotic turnover occurred during the Carnian,[1] early Late Triassic, ~ 230 million years ago.[2] Naming[edit] The CPE is also known as "Reingrabener Wende" (meaning Reingrabener turnover),[10] or "Raibl event".[11] 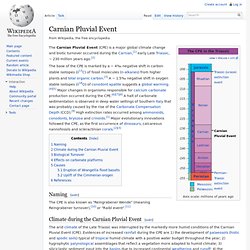 Toarcian turnover :183mya. Aptian extinction : 116mya. Eocene–Oligocene extinction event : 33.5mya. Millions of years ago Eocene–Oligocene extinction is labeled E– OG. The 33.9 Ma transition between the end of the Eocene and the beginning of the Oligocene, called the Grande Coupure (the "Great Break" in continuity) in Europe, is marked by large-scale extinction and floral and faunal turnover (although minor in comparison to the largest mass extinctions). Most of the affected organisms were marine or aquatic in nature. They included the last of the ancient cetaceans, the Archaeoceti. This was a time of major climatic change, especially cooling, not obviously linked with any single major impact or any catastrophic volcanic event.

Madelaine Bohme[1] observed the occurrence of Varanidae, Chameleon, Cordylidae, Tomistominae, Alligatoridae, and giant turtles which indicate survival through the Miocene Climatic Optimum (18 to 16 Ma) in Central Europe (45-42°N palaeolatitude). A major and permanent cooling step occurred between 14.8 and 14.1 Ma, associated with increased production of cold Antarctic deep waters and a major growth of the East Antarctic ice sheet. Two crocodiles of the genera Gavialosuchus and Diplocynodon were noted to have been extant in these northern latitudes prior to the permanent cooling step then became extinct 13.5 to 14 Ma.

Quaternary extinction event. The Quaternary period saw the extinctions of numerous predominantly larger, especially megafaunal, species, many of which occurred during the transition from the Pleistocene to the Holocene epoch. However, this extinction wave did not stop at the end of the Pleistocene, but continued, especially on isolated islands, in Holocene extinctions. Among the main causes hypothesized by paleontologists are natural climate change and overkill by humans, who appeared during the Middle Pleistocene and migrated to many regions of the world during the Late Pleistocene and Holocene. A variant of the latter possibility is the second-order predation hypothesis, which focuses more on the indirect damage caused by overcompetition with nonhuman predators.

The spread of disease is also discussed as a possible reason. Holocene extinction. The dodo, a flightless bird of Mauritius, became extinct during the mid-late seventeenth century after humans destroyed the forests where the birds made their homes and introduced mammals that ate their eggs.