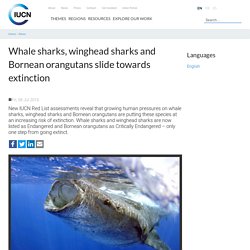 “These new IUCN Red List assessments emphasise how urgent it is for the conservation community to act strategically to protect our planet’s incredible diversity of life. The world’s oceans and forests will only continue to provide us with food and other benefits if we preserve their capacity to do so.” Numbers of whale sharks (Rhincodon typus), the world’s largest living fish, have more than halved over the last 75 years as these slow-moving sharks continue to be fished and killed by ship propellers. Rhincodon typus: INFORMATION. 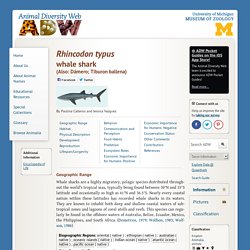 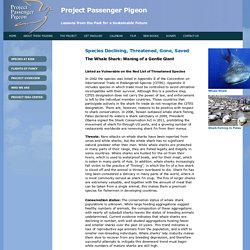 Appendix II includes species in which trade must be controlled to avoid utilization incompatible with their survival. BBC Nature - Whale shark videos, news and facts. Online Learning Center. At the Aquarium The awesome whale shark is not exhibited at the Aquarium. 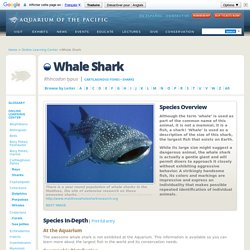 This information is available so you can learn more about the largest fish in the world and its conservation needs. Geographic Distribution. Whale Shark » Our Endangered World. Status: Vulnerable Also known as: Whale Shark. 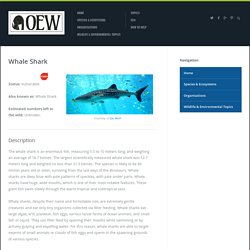 Estimated numbers left in the wild: Unknown. Description The whale shark is an enormous fish, measuring 5.5 to 10 meters long, and weighing an average of 18.7 tonnes. Whale Shark. Whale Sharks - Whale Shark Pictures - Whale Shark Facts. As the largest fish in the sea, reaching lengths of 40 feet (12 meters) or more, whale sharks have an enormous menu from which to choose. 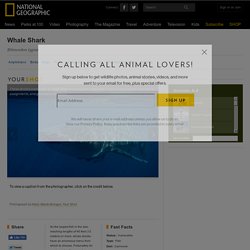 Fortunately for most sea-dwellers—and us! —their favorite meal is plankton. They scoop these tiny plants and animals up, along with any small fish that happen to be around, with their colossal gaping mouths while swimming close to the water's surface.