Desert Climate. Desert Biome. True desert is found under very harsh environmental conditions which are more extreme than those found in the Succulent Karoo Biome and Nama-Karoo Biome. 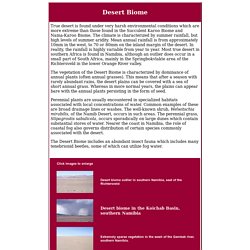 The climate is characterized by summer rainfall, but high levels of summer aridity. Mean annual rainfall is from approximately 10mm in the west, to 70 or 80mm on the inland margin of the desert. What should I wear for desert hiking? E.F. 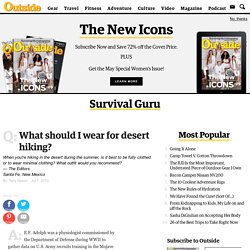 Adolph was a physiologist commissioned by the Department of Defense during WWII to gather data on U.S. Army recruits training in the Mojave Desert. He wrote a landmark book called Physiology of Man in the Desert, which documented his groundbreaking and much needed work. What to Pack for Desert Adventures, Safaris, and other Trips. Adventure junkie Tammy Lowe shares her ultimate packing list for desert adventures, safaris, and more! 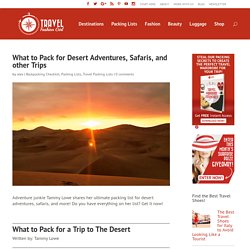 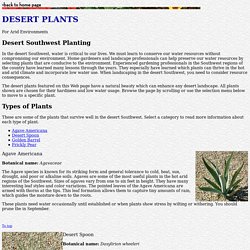 Facts About Plants in the Desert. Top 9 Plants Commonly found in Deserts - Listovative. What is it that sets a desert apart from other landscapes? 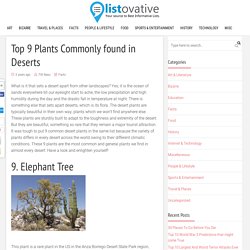 Yes, it is the ocean of sands everywhere till our eyesight start to ache, the low precipitation and high humidity during the day and the drastic fall in temperature at night. There is something else that sets apart deserts, which is its flora. The desert plants are typically beautiful in their own way, plants which we won’t find anywhere else. Untitled. Desert plants: The ultimate survivors. Three years into the worst drought on record, farmers in California have taken action to deal with the lack of water. 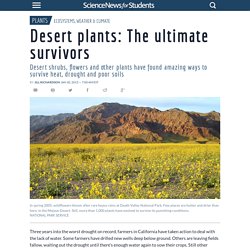 Some farmers have drilled new wells deep below ground. Others are leaving fields fallow, waiting out the drought until there’s enough water again to sow their crops. Untitled.

Animals You Would See In The Desert. What is a Desert? Far from being barren wastelands, deserts are biologically rich habitats with a vast array of animals and plants that have adapted to the harsh conditions there. 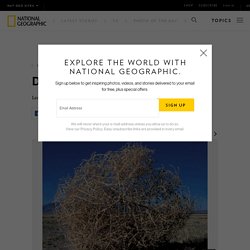 Some deserts are among the planet's last remaining areas of total wilderness. Yet more than one billion people, one-sixth of the Earth's population, actually live in desert regions. What Is a Desert? Deserts cover more than one fifth of the Earth's land, and they are found on every continent. Desert Animal Life Video. Desert Adaptations. Animal Life. Deserts are among the most inhospitable environments for animal life. 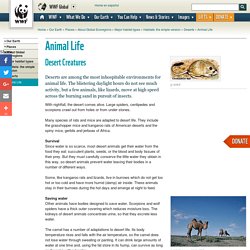 The blistering daylight hours do not see much activity, but a few animals, like lizards, move at high speed across the burning sand in pursuit of insects. With nightfall, the desert comes alive. Desert Animal Adaptations. Chuckwalla Lack of water creates a survival problem for all desert organisms, animals and plants alike. 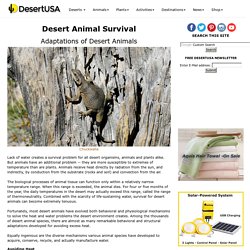 But animals have an additional problem -- they are more susceptible to extremes of temperature than are plants. Animals receive heat directly by radiation from the sun, and indirectly, by conduction from the substrate (rocks and soil) and convection from the air. The biological processes of animal tissue can function only within a relatively narrow temperature range. Desert Biome Fauna. Desert Biome Description The desert biome is one that is very hot and dry. 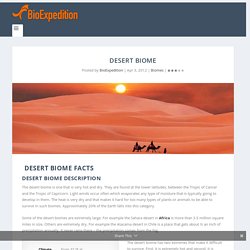 They are found at the lower latitudes, between the Tropic of Cancer and the Tropic of Capricorn. Earth Floor: Biomes. Desert: Animals At first glance, deserts may appear to be without animal life. However, deserts are home to many reptiles, insects, birds, and small mammals. The kangaroo mice of North America and the bilby and red kangaroo of Australia are just a few examples of small mammals that live in the desert. Most large animals have not adapted to desert life. Their size prevents them from finding shelter from the Sun's heat and they are not able to store water for future use. Animals that do survive in the desert have developed a number of adaptations.