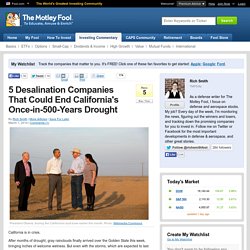 Photo: Wikimedia Commons. California is in crisis. After months of drought, gray rainclouds finally arrived over the Golden State this week, bringing inches of welcome wetness. But even with the storms, which are expected to last through the weekend, residents say their state has been so parched, for so long, that they need 20 inches of rainfall just "to get to normal. " Unfortunately, they'll be lucky to get 4. And this matters to me ... why? The view from Marine One, as all of California's greens turn to brown. Yet with 91.6% of California experiencing "severe to exceptional" drought conditions, these fruits and veggies are getting harder -- and given the need to irrigate, more expensive -- to produce.

Carlsbad Desalination Plant in California. Desalination is the process of taking ocean salt water and forcing it through a membrane to filter out salts through "reverse osmosis" -- thereby creating fresh water. California Turns to the Pacific Ocean for Water. Even in drought-stricken California, San Diego stands out. 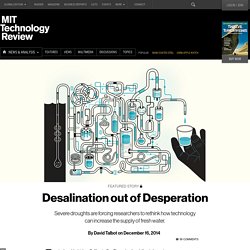 It gets less rain than parched Los Angeles or Fresno. The region has less groundwater than many other parts of the state. And more than 80 percent of water for homes and businesses is imported from sources that are increasingly stressed. The Colorado River is so overtaxed that it rarely reaches the sea; water originating in the Sacramento River delta, more than 400 miles north, was rationed by state officials this year, cutting off some farmers in California’s Central Valley from their main source of irrigation. San Diego County, hot, dry, and increasingly populous, offers a preview of where much of the world is headed. The massive project, in Carlsbad, teems with nearly 500 workers in yellow hard hats. The county is betting on a combination of modern engineering and decades-old desalination technology.

The process is called reverse osmosis (RO), and it’s the mainstay of large-scale desalination facilities around the world. Desalination: Drink a cup of seawater? - US Geological Survey. The USGS Water Science School Thirsty? 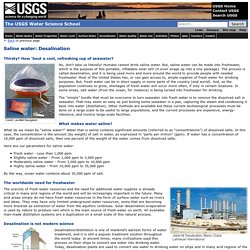 Drought-Stricken Texas Town Turns To Toilets For Water. After three years of drought, the water has receded from a dock at Lake Arrowhead State Park near Wichita Falls, Texas. 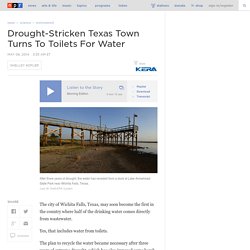 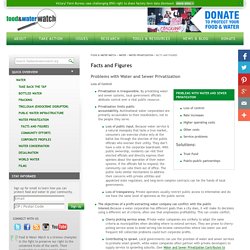 By privatizing water and sewer systems, local government officials abdicate control over a vital public resource.Privatization limits public accountability. Multinational water corporations are primarily accountable to their stockholders, not to the people they serve. Loss of public input. Because water service is a natural monopoly that lacks a true market, consumers can exercise choice only at the ballot box through the election of the public officials who oversee their utility. Water privatization in the United States.

In some places in the United States private ownership and provision of water was the norm historically and in the latter half of the 19th century, private water systems began to be a part of municipal services.[1] As of 2011, over three quarters of US local governments surveyed by the ICMA ( International City/County Management Association ) provide water distribution entirely with public employees. 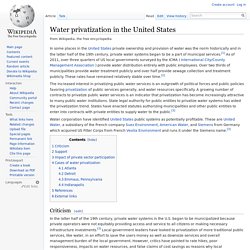 Over two thirds of municipalities provide water treatment publicly and over half provide sewage collection and treatment publicly. These rates have remained relatively stable over time.[2] Water is the new oil: How corporations took over a basic human right. When you talk about human rights, not to mention human necessities, there’s not much more fundamental than water. 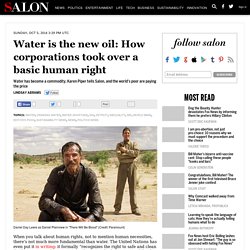 The United Nations has even put it in writing: it formally “recognizes the right to safe and clean drinking water and sanitation as a human right that is essential for the full enjoyment of life and all human rights.” That’s the theory, at least. In practice? Well, on Monday, U.S. Bankruptcy Judge Steven Rhodes arrived at a different conclusion from that of the U.N., in a ruling on Detroit’s hotly contested practice of cutting off water access to tens of thousands of residents who can’t pay their bills. While it’s shocking to watch a city deny the rights of its own citizens, that’s nothing compared to what could happen if private water companies are allowed to take over. 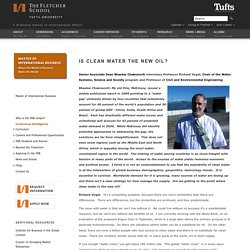 Each has drastically different water issues and collectively will account for 42 percent of projected water demand in 2030. While McKinsey did identify potential approaches to addressing the gap, the solutions are far from straightforward. This does not even cover regions such as the Middle East and North Africa, which is arguably among the most water-constrained region in the world. The sharing of water among countries is an issue fraught with tension in many parts of the world. RV: There are political constraints.