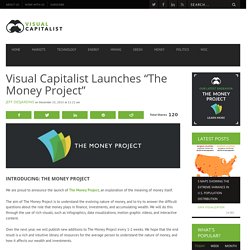 The aim of The Money Project is to understand the evolving nature of money, and to try to answer the difficult questions about the role that money plays in finance, investments, and accumulating wealth. We will do this through the use of rich visuals, such as infographics, data visualizations, motion graphic videos, and interactive content.

Over the next year, we will publish new additions to The Money Project every 1-2 weeks. We hope that the end result is a rich and intuitive library of resources for the average person to understand the nature of money, and how it affects our wealth and investments. This week, we start by publishing two foundational infographics: What is Money and The Properties of Money. See How Quickly Tech Giants Build Wealth. The data of Davos: Who’s on the Magic Mountain? Will Japan Face the Next Debt Crisis? Understanding the European Crisis. Eurozone crisis: three years of pain - interactive timeline. INFOGRAPHIC: Where the world’s poorest will live in 2015.

This infographic from the OECD Development Assistance Committee projects which countries will be home to the world’s poorest people by 2015, and compares this to the picture in 2005. 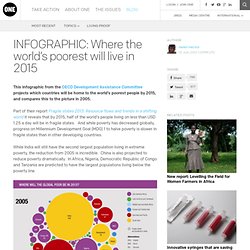 Part of their report Fragile states 2013: Resource flows and trends in a shifting world it reveals that by 2015, half of the world’s people living on less than USD 1.25 a day will be in fragile states. And while poverty has decreased globally, progress on Millennium Development Goal (MDG) 1 to halve poverty is slower in fragile states than in other developing countries.

While India will still have the second largest population living in extreme poverty, the reduction from 2005 is incredible. China is also projected to reduce poverty dramatically. In Africa, Nigeria, Democratic Republic of Congo and Tanzania are predicted to have the largest populations living below the poverty line. The Health Of Every County In America, Mapped And Ranked. Many factors drive health: from how much people drink and smoke, and what sort of health care they have, to all kinds of economic and environmental factors, like employment and pollution. 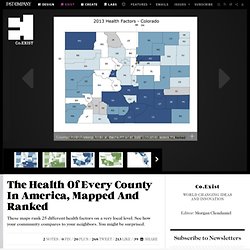 To see how your county is doing, and what factors may be behind its performance, take a look at the County Health Rankings website. It offers a terrifically useful and detailed snapshot of more than 3,000 communities across the nation. From the homepage, you can dive into your state, and see how your county compares. We’ve reproduced some of the maps here, for Colorado, Florida and Washington state.

"Health outcomes" are in green (e.g. mortality rates and how often people feel unwell), while "health factors" are in blue (e.g. rates of inactivity and fast-food restaurants). One of the main points of the rankings is to show that health depends on more than access to health care, says Bridget Catlin, who leads the project. Wealth Inequality in America. Comparing Chinese provinces with countries: All the parities in China.

Money Chart. Top economists reveal their graphs of 2011. Averge-incomes. Ranking tech companies by revenue per employee. (Note: The ideal measurement would use profit instead of revenue and payroll instead of employee headcount. 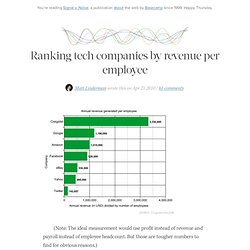 But those are tougher numbers to find for obvious reasons.) After the jump: The story behind this chart. The Calacanis/DHH discussion touched on the idea that web companies should pay more attention to unique visitors per employee. The theory: That ratio forces you to get away from talking sheer size/traffic and instead focus on efficiency.

Now a while back we posted about this idea. (Site rank via Alexa. But how important is site rank really? So let’s take those same companies and add annual revenues into the picture: (Revenue figures via Yahoo! Dividing revenue by employee gives us a better look at which companies are the most efficient. World debt comparison: The global debt clock. General Government Debt as Percent of GDP by Country. The Value of an Hour of Work (GDP) More Infographics on Good. 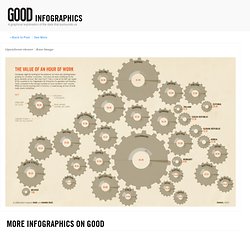