The Best Data Visualization Projects of 2014. It's always tough to pick my favorite visualization projects. 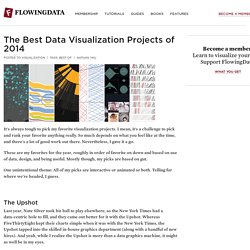 I mean, it's a challenge to pick and rank your favorite anything really. So much depends on what you feel like at the time, and there's a lot of good work out there. Nevertheless, I gave it a go. These are my favorites for the year, roughly in order of favorite on down and based on use of data, design, and being useful. Mostly though, my picks are based on gut. One unintentional theme: All of my picks are interactive or animated or both. The Upshot Last year, Nate Silver took his ball to play elsewhere, so the New York Times had a data-centric hole to fill, and they came out better for it with the Upshot. If I didn't cluster the Upshot visualization projects into this one section, the individual works would dominate the list.

Where We Came From and Where We Went. Pisa 2012 results: which country does best at reading, maths and science? The latest Programme for International Assessment (Pisa) results are out today. 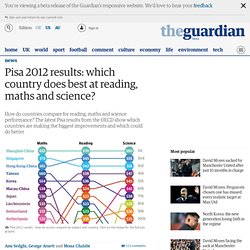 The release by the Organisation for Economic Co-operation and Development (OECD) shows that the UK has seen slight improvements in maths and reading performance but has slipped down four places in the overall ranking for science. The UK is ranked 23rd for reading, 26th for maths and 20th for science. In 2009 it was placed 25th, 28th and 16th respectively. Shanghai tops the overall ranking with Singapore and Hong Kong being placed second and third place respectively. Since 2000, the OECD has attempted to evaluate the knowledge and skills of 15-year olds across the world through its Pisa test. The triennial results provide a wealth of data - from which countries are making the biggest improvements in education ranking to how the gender gap varies by subject.

Sometimes Good Data is Hard to Come By. Sometimes the most challenging aspect of creating data visualizations is finding an interesting data set that tells a story. 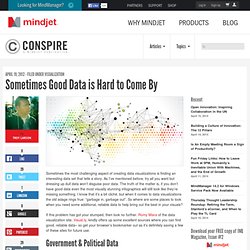 As I’ve mentioned before, try all you want but dressing up dull data won’t disguise poor data. The truth of the matter is, if you don’t have good data even the most visually stunning infographics will still look like they’re missing something. I know that it’s a bit cliché, but when it comes to data visualizations the old adage rings true: “garbage in, garbage out”. So where are some places to look when you need some additional, reliable data to help bring out the best in your visuals? If this problem has got your stumped, then look no further. Government & Political Data For those seeking information that governments record (i.e. earthquakes, local area unemployment stats, the Consumer Price Index, air pollution levels, or crime rates) Data.gov is the place for you. Find Data. Data science.

We’ve all heard it: according to Hal Varian, statistics is the next sexy job. 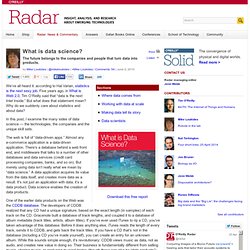 Five years ago, in What is Web 2.0, Tim O’Reilly said that “data is the next Intel Inside.” But what does that statement mean? Big Data: A New Approach to Finding Info. A breakthrough method to graphically represent knowledge enables software developers to easily build intelligent agents such as Apple's Siri and IBM Watson. 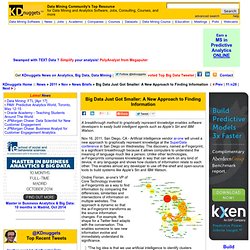 Nov 16, 2011, San Diego, CA - Artificial intelligence vendor ai-one will unveil a new approach to graphically represent knowledge at the SuperData conference in San Diego on Wednesday. The discovery, named ai-Fingerprint, is a significant breakthrough because it allows computers to understand the meaning of language much like a person. Unlike other technologies, ai-Fingerprints compresses knowledge in way that can work on any kind of device, in any language and shows how clusters of information relate to each other. This enables almost any developer to use off-the-shelf and open-source tools to build systems like Apple's Siri and IBM Watson. "The big idea is that we use artificial intelligence to identify clusters and show how each cluster relates to another," said Florian. 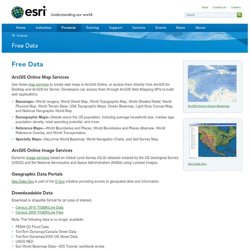 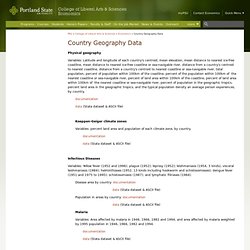 Media Map Shows Impact of Information. (December 5, 2011) How do we know that media make a difference? 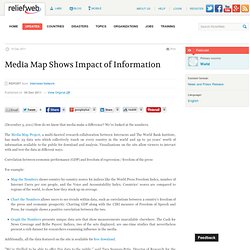 We’ve looked at the numbers. The Media Map Project, a multi-faceted research collaboration between Internews and The World Bank Institute, has made 25 data sets which collectively touch on every country in the world and up to 30 years' worth of information available to the public for download and analysis. Visualizations on the site allow viewers to interact with and test the data in different ways. Correlation between economic performance (GDP) and freedom of expression / freedom of the press. STATS - MDGs Indicators. Statistical Data. Data journalism. National institutes of statistics. Government Data. US: data.gov. US Gov XML. 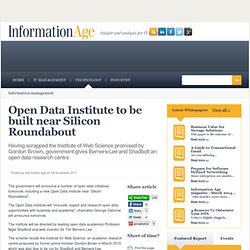 The scheme recalls the Institute for Web Science, an academic research centre proposed by former prime minister Gordon Brown in March 2010, which was also due to be run by Shadbolt and Berners-Lee. "We want to build on the outstanding work Sir Tim and Nigel Shadbolt have put in to 'making public data public'," said Brown at the time.

However, the current government scrapped the £30 million plan in May 2010, saying it was a "low priority". UK government announces open data initiative. Ofcom Data Downloads. UK: data.gov.uk. Census 2011: the results map of England and Wales.