How Should Schools Handle Cyberbullying? Cyberbullying: A growing problem. Around 10 percent of all adolescents in grades 7-9 are victims of internet bullying. 'This type of bullying can be more serious than conventional bullying. 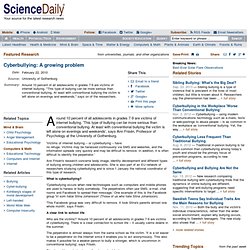 At least with conventional bullying the victim is left alone on evenings and weekends', says Ann Frisén, Professor of Psychology at the University of Gothenburg. 'Victims of internet bullying -- or cyberbullying -- have no refuge. Victims may be harassed continuously via SMS and websites, and the information spreads very quickly and may be difficult to remove. In addition, it is often difficult to identify the perpetrator.' Ann Frisén's research concerns body image, identity development and different types of bullying among children and adolescents. In cyber bullying, depression hits victims hardest. Young victims of electronic or cyber bullying — which occurs online or by cell phone — are more likely to suffer from depression than their tormentors are, a new study finds. 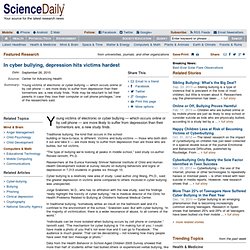 Traditional bullying, the kind that occurs in the school building or face-to-face, is different. Victims and bully-victims — those who both dish it out and take it — are more likely to suffer from depression than are those who are bullies, but not victims. “The type of bullying we’re looking at peaks in middle school,” said study co-author Ronald Iannotti, Ph.D. Researchers at the Eunice Kennedy Shriver National Institute of Child and Human Health Development looked at survey results on bullying behaviors and signs of depression in 7,313 students in grades six through 10.

Cyber bullying is a relatively new area of study. Jorge Srabstein, M.D., who has no affiliation with the new study, said the findings “really highlight the toxicity of cyber bullying.” Gender was not a factor: boys and girls equally were vulnerable. Erie County Passes Cyberbullying Law. Photo Courtesy AP Months after a Williamsville teen got worldwide attention following a suicide that many say happened because he was bullied, a new law will soon be in place that takes aim at cyberbullying. 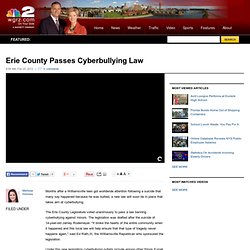 The Erie County Legislature voted unanimously to pass a law banning cyberbullying against minors. The legislation was drafted after the suicide of 14-year-old Jamey Rodemeyer. "It broke the hearts of the entire community when it happened and this local law will help ensure that that type of tragedy never happens again," said Ed Rath,III, the Williamsville Republican who sponsored the legislation. Under this new legislation cyberbullying outlets include among other things E-mail, social media, and text messaging. Erie County Passes Cyberbullying Law. Cyberbullying.

Listen What to Do If you're being bullied, harassed, or teased in a hurtful way — or know someone who is — there is no reason to suffer in silence. 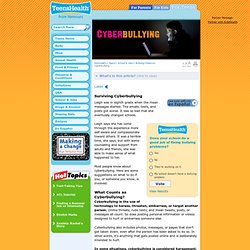 In fact, you absolutely should report upsetting IMs, emails, texts, etc. Tell someone. Most experts agree: The first thing to do is tell an adult you trust. Most parents are so concerned about protecting their kids that sometimes they focus on taking all precautions to stop the bullying. You can also talk to your school counselor or trusted teacher or other family member. Walk away. If you see something upsetting, try to step away from the computer or turn off your phone for a while. Taking a break like this allows you to keep things in perspective and focus on the good things in your life. Resist the urge to retaliate or respond. The news magazine for high school. How a Cyberbully Almost Ruined My Life Lynda Lopez on the vicious e-mails and death threats that nearly sank her college plans—and how she fought back By Lynda Lopez, 19 In October 2009, I learned that I was a finalist for a full scholarship to Carleton College in Northfield, Minnesota. 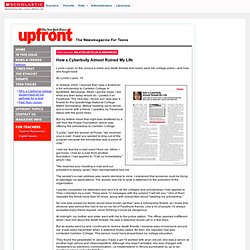 When I got the news, I did what any teen today would do: I posted it on Facebook. The next day, I found out I was also a finalist for the Questbridge National College Match Scholarship. But my festive mood that night was shattered by a call from the Posse Foundation, which was offering the scholarship to Carleton College. "Lynda," said the woman at Posse, "we received your e-mail. I told her that the e-mail wasn't from me. From social networking to cyber bullying. It's called "social networking" and it was meant to bring people closer together. 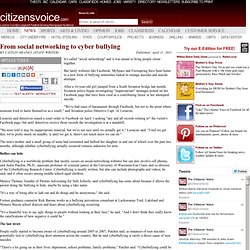 But lately websites like Facebook, MySpace and Formspring have been home to a new form of bullying sometimes linked to teenage suicides and suicide attempts. After a 16-year-old girl jumped from a South Scranton bridge last month, Scranton police began investigating "inappropriate" messages posted on her Facebook page that have been cited as a contributing factor in her attempted suicide.

"We've had cases of harassment through Facebook, but not to the point where someone tried to harm themselves as a result," said Scranton police Detective Capt. Al Leoncini. Leoncini said detectives issued a court order to Facebook on April 1 seeking "any and all records relating to" the victim's Facebook page, but until detectives receive those records the investigation is at a standstill.

"We were told it may be inappropriate material, but we're not sure until we actually get it," Leoncini said. Bullies can hide Getting help. Cyberbullying: What It Is and What to Do About It. <br/><a href=" US News</a> | <a href=" Business News</a> Copy As the outrage and outpouring of emotion continue over the suicide of Jamey Rodemeyer, the American public continues to wake up to the exceptionally serious nature of cyberbullying. 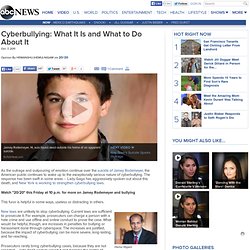 The response has been swift in some areas -- Lady Gaga has aggressively spoken out about this death, and New York is working to strengthen cyberbullying laws. Watch "20/20" this Friday at 10 p.m. for more on Jamey Rodemeyer and bullying This furor is helpful in some ways, useless or distracting in others. Ms. Lyon's Cyberbullying Sources. Are_You_a_Cyberbully. Cyberbullying_Direct_Attacks. Cyberbully_Because_I_Can. Cyber_Stalking. What_Is_Cyberbullying_Exactly.