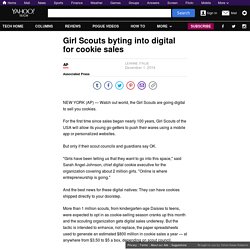 For the first time since sales began nearly 100 years, Girl Scouts of the USA will allow its young go-getters to push their wares using a mobile app or personalized websites. Camarillo Restaurant jobs - New Restaurant Opening In Camarillo! at Chipotle Mexican Grill. Description Building the perfect burrito - and having fun doing it - is the first step to building your career at Chipotle. 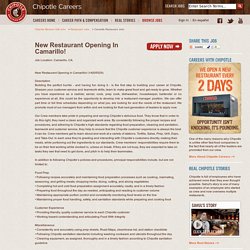 Sharpen your customer-service and teamwork skills, learn to make great food and get ready to grow. Whether you have experience as a cashier, server, cook, prep cook, dishwasher, housekeeper, bartender or no experience at all, this could be the opportunity to develop into a restaurant manager position. We can offer part time or full time schedules depending on what you are looking for and the needs of the restaurant. Google launches 'smart' spoon to help steady shaking hands. 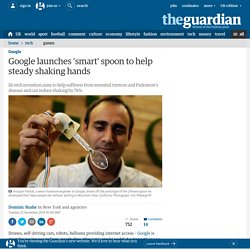 Now the company has added a “smart” spoon to its portfolio of hi-tech products. Google has started promoting its Liftware spoon, a utensil that uses hundreds of algorithms to sense how a hand is shaking and makes instant adjustments to stay balanced. The product is aimed at people with essential tremors and Parkinson’s disease and, according to the company, can reduce shaking of the spoon bowl by an average of 76%. Essential tremors and Parkinson’s disease affect more than 10 million people worldwide, including Google co-founder Sergey Brin’s mother. Uber Vies For Users' Hearts And Ears With Spotify Partnership. Half The Battle Over Net Neutrality Is Defining What It Means. President Obama's call for stronger net neutrality rules touched off a round of heated debate. 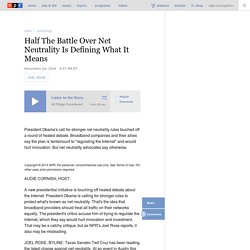 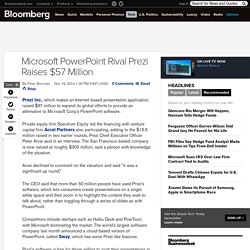 Private equity firm Spectrum Equity led the financing with venture capital firm Accel Partners also participating, adding to the $15.5 million raised in two earlier rounds, Prezi Chief Executive Officer Peter Arvai said in an interview. The San Francisco-based company is now valued at roughly $300 million, said a person with knowledge of the situation. From Singapore, An App That Gets You to Stop Using Your Smartphone. An industry trade group in the city-state of Singapore is behind a new mobile phone app that will curl the toes of digital advertising companies. 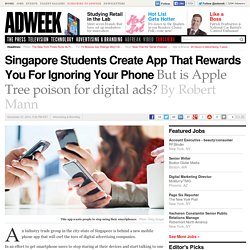 In an effort to get smartphone users to stop staring at their devices and start talking to one another, the Singapore Computer Society awarded $24,000 to three students who developed an app that immobilizes handsets when two or more smartphones are placed together. The app is called Apple Tree because an image of a tree begins sprouting on the mobile screen if the phones remain untouched. Want to get rid of ads? Pay Google a fee. Samsung Had A Plan To End Android, But It's Failing. Steve Kovach/Business Insider A prototype Samsung phone running Tizen. 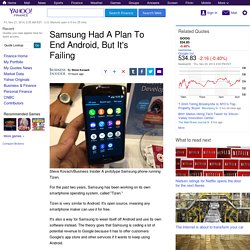 For the past two years, Samsung has been working on its own smartphone operating system, called "Tizen. " Tizen is very similar to Android. Lantern: A Mobile Device That Brings Forth Free Wi-Fi Internet Access for All [Video] A device that can provide free Internet access anywhere in the world sounds too good to be true, but Outernet is hoping to hit the nail on the head with a successful crowd-funding initiative. 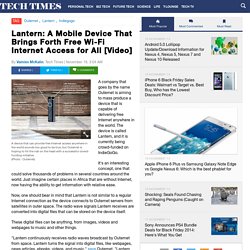 (Photo : Outernet) A company that goes by the name Outernet is aiming to mass produce a device that is capable of delivering free Internet anywhere in the world. The device is called Lantern, and it is currently being crowd-funded on IndieGoGo. It's an interesting concept, one that could solve thousands of problems in several countries around the world. Just imagine certain places in Africa that are without Internet, now having the ability to get information with relative ease. Apple Watch "WatchKit" SDK to be launched in November 2014. The Apple Watch is going to be out very soon. 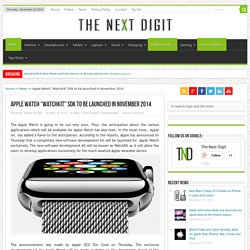 Thus, the anticipation about the various applications which will be available for Apple Watch has also risen. In the mean time,. Toning Down the Tweets Just in Case Colleges Pry. Photo. 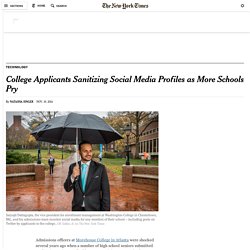 Amazon uses Snapchat to send exclusive deals. Google's 10-year run as Firefox's default search engine in the US is over. Yahoo wants more search traffic, and a deal with Mozilla will bring it. In a major departure for both Mozilla and Yahoo, Firefox's default search engine is switching from Google to Yahoo in the United States. Apple said to be embedding Beats music service into iOS. Having the subscription music service preloaded onto devices, as the Financial Times says is planned, gives Apple a leg up over competitors such as Spotify. Apple plans to load the subscription music service it obtained from its acquisition of Beats into the iOS operating system powering iPhones and iPads as soon as early next year, according to the Financial Times (subscription required). By preloading the service -- which may not use the Beats name -- on its devices, Apple gains an edge in promoting its own offer over the competition, which includes Spotify and Rhapsody.

A subscription music service would represent a new revenue stream and keeps customers locked into the Apple ecosystem. A spokesman for Apple declined to comment on the report. HBO Go lands on Xbox One at last. The on-demand streaming service from the premium cable network is available for Microsoft's game console. HBO Go, the cable network's a la carte online streaming service, is now available for the Xbox One game console, Microsoft confirmed Thursday. Available only to paid channel subscribers, HBO Go lets viewers access HBO's entire library, from "The Sopranos" to "Game of Thrones. " While it has been available on Microsoft's last-generation Xbox 360 and Sony's competing PlayStation 3 for months, the network's app was absent from both companies' newer hardware since it was released a year ago.

Microsoft announced back in June that Xbox One users would have access to HBO Go by the end of the year. HBO Go lands on Xbox One at last. Firefox dumps Google for search, signs on with Yahoo. Google's 10-year run as Firefox's default search engine in the US is over. Yahoo wants more search traffic, and a deal with Mozilla will bring it. In a major departure for both Mozilla and Yahoo, Firefox's default search engine is switching from Google to Yahoo in the United States. "I'm thrilled to announce that we've entered into a five-year partnership with Mozilla to make Yahoo the default search experience on Firefox across mobile and desktop," Yahoo Chief Executive Marissa Mayer said in a blog post Wednesday.

However, companies face significant hurdles in their talent search. The first is demographic: 43% of the U.S. workforce is eligible for retirement in the next 10 years, while in the United Kingdom, 3.5 million people will retire in the next five years, Hurd said. For Oracle, with 130,000 employees around the world, even a 10% employee attrition rate would require the company to recruit, evaluate, hire, onboard, and integrate thousands of people every year. A second hurdle is at the other end of the demographic spectrum: The new generation of people being recruited out of college demand more transparent career paths and faster rewards than preceding generations, and they expect their employers to provide them with more modern workplace and collaboration tools than are available at most companies today. "In contrast to legacy systems that run on company premises, software as a service, or SaaS, allows companies to standardize their HR IT on a platform that embeds best practices across different geographies and that gets updated with hundreds of new features every year." – jtmares

BitBite wearable device tracks your eating habits and tells you to chew slower. Facebook set to enter workplace. R.I.P., Pay Phones. Hello, 'Links' Pay phones are dead in New York City. Facebook wants to be your office friend too. The Wall Street Journal reports that Facebook is preparing to launch a version of its social networking service with a distinctly corporate twist—Facebook at Work.

Samsung to slash number of smartphone models. © Provided by AFP A model holds Samsung's 'curved' smartphone Galaxy Round, at the Electronics and IT Industry Fair in Goyang, north of Seoul, on October 10, 2013 Samsung Electronics has announced plans to slash the number of smartphone models it issues next year by up to one-third as it tries to cut prices in the face of intense Chinese competition. Baggage Blues No More: A Smart Suitcase Raises $1 Million on Indiegogo.

"fight between Apple Inc. and the Justice Department, centered on whether the company should use encryption to block government access to users' smartphones" "Apple joins other technology companies that have beefed up their uses of encryption by pushing back against government requests for cooperation." "WhatsApp, a messaging service owned by Facebook Inc., said Tuesday it is now encrypting texts between Android phones and is unable to decrypt messages for law enforcement," – brianna_ashleigh

These Guys Just DIY'd a Way to Do Laundry for the Homeless. Need to fix a business process? There's probably an app for that. Facebook Simplifies its Data Policy; Now Offering Privacy Tutorials. Introducing Snapcash. Smart Earrings Can Track Your Heart Rate and Monitor Your Activity.

"The Ear-o-Smart is a pair of smart earrings that connect to your smartphone via Bluetooth to monitor your heart rate, calories, and activity levels" – maciasa

The Black Friday war begins: Walmart will match Amazon’s prices in all stores.

Duke to expand mix of in-person and online education.

"Each semester since Duke’s initial partnership with Coursera in Fall 2012 has seen the addition of new massive open online course offerings, or MOOCs. The growth of online education has been met with measured optimism by students and faculty alike, said Lynne O’Brien, associate vice provost for digital and online education initiative" "Positive responses have typically come when faculty have been able to keep the total workload the same as a traditional class,” O’Brien said. “I’ve heard criticism when students perceive that somehow the courseload has been greatly expanded, or if the in-person part hasn’t been designed well and it ends up just being more lecture…or if it doesn’t feel like they’re making good use of class time.” The University has started to create “specializations”—series of online courses that revolve around a specific theme and include a capstone project. – brianna_ashleigh