A brief History of Lemurian Seed Crystals : Lifes Treasures Kauai, Home of Authentic Northern California Monatomic Andara Crystals since 2002. I have been told that pioneering American miners in the 1940s, working land owned by Brazilians, opened up two mines in the mountains of the Serra do Cabral mountain range near the town of Joaquin Felicio, in the state of Minas Gerais. 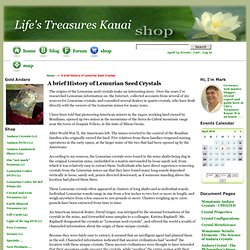 After World War II, the Americans left. The mines reverted to the control of the Brazilian families who originally owned the land. Five relatives from these families reopened mining operations in the early 1990s, at the larger mine of the two that had been opened up by the Americans. According to my sources, the Lemurian crystals were found in the mine shafts being dug in the original Lemurian mine, embedded in a matrix surrounded by loose sandy soil, from which it was relatively easy to extract them. Individuals who have direct experience removing crystals from the Lemurian mines say that they have found many long wands deposited vertically in loose, sandy soil, points directed downward, as if someone standing above the location had placed them there. Arkansas Crystal Works CRYSTAL KNOWLEDGE INDEX. Crystal is made of Silicon dioxide. 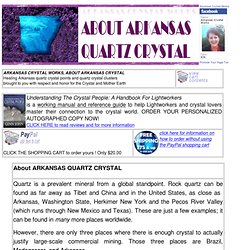 Silicon dioxide is comprised of one atom of silicon and two atoms of oxygen.Take a silica rich solution, add 250 million years or so, some heat and pressure, and violà … you have crystal! It is a daunting task to describe how old crystal really is. The entire existence of humankind is not even a blip on the radar screen in comparison. Now we will shift focus from what crystal is made of to where they are formed. While there are several different ways that mountains are created, the mountains in Arkansas were created by “folding” and “faulting.” Crystal Energy Basics - Crystal Reference Library. Everything, everywhere carries some type of energy signature. 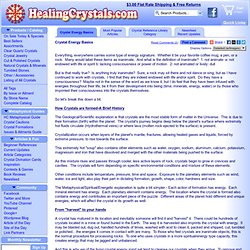 Whether it be your favorite coffee mug, a pen, or a rock. Many would label these items as inanimate. And what is the definition of Inanimate? 1: not animate: a: not endowed with life or spirit But is that really true? So let's break this down a bit. How Crystals are formed-A Brief History. Use of Beryl and Rock-Crystal as Modern Crystal Balls.

Although, as we have seen, many different materials were used for scrying, the preference was often given to polished spheres of beryl; in modern times, however, the rock-crystal is considered the best adapted for the purpose. 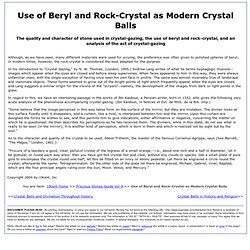 In his introduction to "Crystal Gazing," by N. W. Thomas, (London, 1905.) Andrew Lang writes of what he terms hypnagogic illusions--images which appear when the eyes are closed and before sleep supervenes. When faces appeared to him in this way, they were always unfamiliar ones, with the single exception of having once seen his own face in profile. History. Atlantean Crystals. Atlantean Crystals Theories about Atlantis mention the extensive use of crystals by Atlanteans. 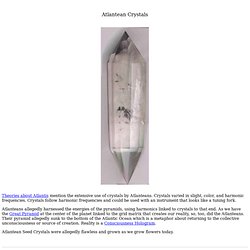 Crystals varied in slight, color, and harmonic frequencies. Crystals follow harmonic frequencies and could be used with an instrument that looks like a tuning fork. Atlanteans allegedly harnessed the energies of the pyramids, using harmonics linked to crystals to that end. Smoky Quartz Jewelry - Rings, Earrings, Pendants and Bracelets. Smoky quartz is the National Gem of Scotland and has been considered a sacred stone there for a long time, a belief dating back to the Druids. 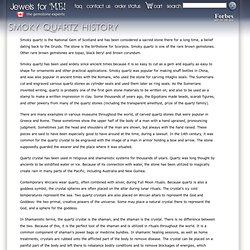 The stone is the birthstone for Scorpios. Smoky quartz is one of the rare brown gemstones. Other rare brown gemstones are topaz, black beryl and brown corundum. Smoky quartz has been used widely since ancient times because it is so easy to cut as a gem and equally as easy to shape for ornaments and other practical applications. Smoky quartz was popular for making snuff bottles in China, and was also popular in ancient times with the Romans, who used the stone for carving intaglio seals. There are many examples in various museums throughout the world, of carved quartz stones that were popular in Greece and Rome. Quartz crystal has been used in religious and shamanistic systems for thousands of years. Contemporary Wiccans wear quartz, often combined with silver, during Full Moon rituals. Vogel Crystals Explained. Crystal Healing. Crystal Healing - What is it? 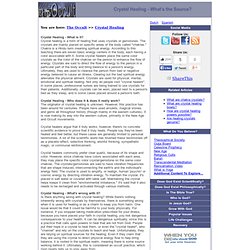 Crystal healing is a form of healing that uses crystals or gemstones. The crystals are mainly placed on specific areas of the body called "chakras. " Chakra is a Hindu term meaning spiritual energy. According to this teaching there are seven basic energy centers in the body, each having a color associated with it. Crystal Balls and Divination Throughout History. Basic History of Crystal. The use of crystals dates back as far as there are records of history itself. They were used in Biblical times, throughout Ancient Egypt, Rome and date to all ancient cultures. The bible makes mention of crystals over 200 times, one of the most notable being in Exodus, where the High Priest, Aaron, (brother of Moses) was instructed by God to make breast plate from particular crystals which he was to wear for protection and wisdom.

Ancient cultures and civilizations have used crystals for many different purposes. They have been used in medicine and health care, protection, magic and rituals, as offerings and currency, scrying for gazing for divination, for good luck and wealth as well as precious gifts and items of beauty. They were used to make elixirs and as a “first aid” tool. The actual word crystal comes from a Greek word Crystallos, from “Krysos” meaning “ice cold”, as it was originally thought that crystals were a type of ice that was so cold it would never melt.