Dissolution of the Soviet Union. The Union of Soviet Socialist Republics (USSR) formally ceased to exist on 26 December 1991. 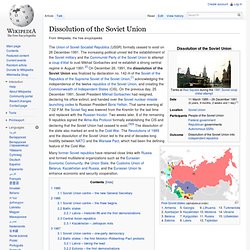 Nikolay Vasilyevich Gogol, IPA: [nʲɪkɐˈlaj vɐˈsʲilʲjɪvʲɪtɕ ˈgogəlʲ]; Ukrainian: Мико́ла Васи́льович Го́голь, Mykola Vasyliovych Hohol; 31 March [O.S. 19 March] 1809 – 4 March [O.S. 21 February] 1852) was a Ukrainian-born Russian dramatist, novelist and short story writer.[2] Early life[edit] Gogol was born in the Ukrainian Cossack village of Sorochyntsi,[2] in Poltava Governorate of the Russian Empire, present-day Ukraine. His mother was a descendant of Polish landowners. His father Vasily Gogol-Yanovsky, a descendant of Ukrainian Cossacks and who died when Gogol was 15 years old, belonged to the 'petty gentry', wrote poetry in Ukrainian and Russian, and was an amateur Ukrainian-language playwright. In 1820 Gogol went to a school of higher art in Nizhyn and remained there until 1828. In 1828, on leaving school, Gogol came to St Petersburg, full of vague but glowingly ambitious hopes. 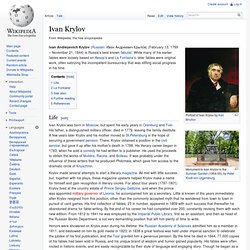 While many of his earlier fables were loosely based on Aesop's and La Fontaine's, later fables were original work, often satirizing the incompetent bureaucracy that was stifling social progress in his time. Life[edit] Ivan Krylov was born in Moscow, but spent his early years in Orenburg and Tver. His father, a distinguished military officer, died in 1779, leaving the family destitute. A few years later Krylov and his mother moved to St.Petersburg in the hope of securing a government pension. Krylov made several attempts to start a literary magazine. Krylov's statue in the Summer Garden (1854–55) is one of the most notable monuments in St.Petersburg. The Crystal Palace. Alexander Herzen. Life[edit] Herzen was born out of wedlock to a rich Russian landowner, Ivan Yakovlev, and a young German Protestant woman, Henriette Wilhelmina Luisa Haag from Stuttgart. 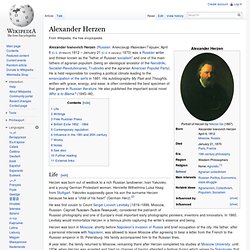 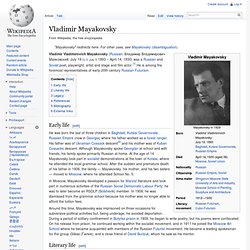 July 7] 1893 – April 14, 1930) was a Russian and Soviet poet, playwright, artist and stage and film actor.[1] He is among the foremost representatives of early-20th century Russian Futurism. Early life[edit] In Moscow, Mayakovsky developed a passion for Marxist literature and took part in numerous activities of the Russian Social Democratic Labour Party; he was to later become an RSDLP (Bolshevik) member. Shavarsh Karapetyan. Shavarsh Karapetyan (Armenian: Շավարշ Կարապետյան) is a retired Soviet Armenian finswimmer, a World and European champion, best known for saving the lives of 20 people in a 1976 incident in Yerevan. 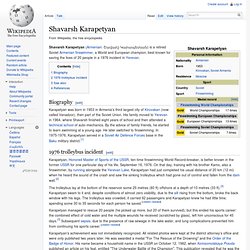 Biography[edit] Karapetyan was born in 1953 in Armenia's third largest city of Kirovakan (now called Vanadzor), then part of the Soviet Union. His family moved to Yerevan in 1964, where Shavarsh finished eight years of school and then attended a technical school of auto-mechanics. By the advice of family friends, he started to learn swimming at a young age. He later switched to finswimming. The Three Questions. "The Three Questions" is a short story by Russian author Leo Tolstoy first published in 1885[citation needed] as part of the collection What Men Live By, and other tales. 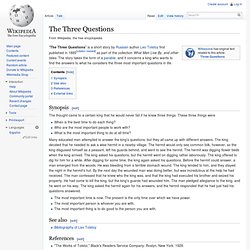 The story takes the form of a parable, and it concerns a king who wants to find the answers to what he considers the three most important questions in life. Synopsis[edit] The thought came to a certain king that he would never fail if he knew three things. These three things were When is the best time to do each thing? Many educated men attempted to answer the king's questions, but they all came up with different answers. The most important time is now. Clicking pictures has never been so much fun! - clikr.