No, the U.S. Doesn't Have Plans to Nuke North Korea. In case you hadn't noticed, the new U.S. war in Iraq is not going well. 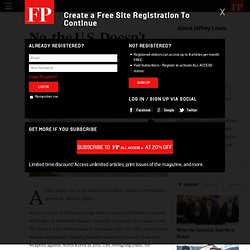 The alliance we've been trying to assemble to "degrade and ultimately destroy" the Islamic State (IS) is looking like a lot of other recent U.S. -led coalitions: Uncle Sucker takes the lead and does most of the work while our allies free-ride, engage in mostly symbolic military actions, or actively undermine the common effort. No wonder U.S. President Barack Obama was reluctant to get into this war, and why he keeps warning that it will take longer than the rest of his presidency. What's most worrisome to me is the extent to which the United States seems to be repeating many of the mistakes that helped derail our past misadventures in that part of the world.

Mistake No. 1: Exaggerating the Threat Ever since the first Gulf War, U.S. leaders have routinely exaggerated the threat that the United States faced in Iraq and/or Syria. After (the Most Recent North Korean) Detonation–What? Well, now that it’s happened for a third time, what now? 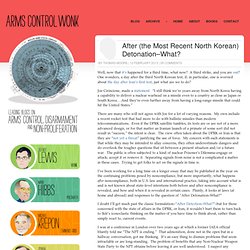 A third strike, and you are out? One wonders, a day after the third North Korean test, if, in particular, one is worried about the day after Iran’s first test, just what are we to do? North Korea's third N test: What does it mean? John Carlson is a Visiting Fellow at the Lowy Institute and the former Director-General of the Australian Safeguards and Non-proliferation Office. From seismic analysis, it appears North Korea's latest nuclear test had a yield of 6 to 7 kilotons (thousand tons of TNT). This is larger than the previous two tests (the 2006 test is believed to have had a yield of 400 tons, the 2009 test is believed to have been around 4 kilotons), but is still small by nuclear weapon standards – the bomb dropped on Hiroshima was around 15 kilotons, and modern weapons are an order of magnitude larger.

The implications of this relatively small yield are not clear. Isotope Analysis Points to Two North Korean Nuke Tests in 2010. PrintShareEmailTwitterFacebookLinkedIn A new study involving measurements of airborne radioisotopes suggests North Korea could have secretly carried out two underground nuclear detonations in 2010, Nature reported on Friday. 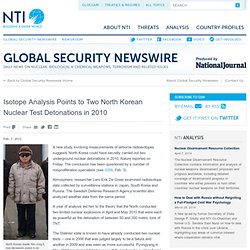 The conclusion has been questioned by a number of nonproliferation specialists (see GSN, Feb. 3). Atmospheric researcher Lars-Erik De Greer examined radioisotope data collected by surveillance stations in Japan, South Korea and Russia. The Swedish Defense Research Agency scientist also analyzed weather data from the same period. A year of analysis led him to the theory that the North conducted two limited nuclear explosions in April and May 2010 that were each as powerful as the detonation of between 50 and 200 metric tons of TNT.

The Stalinist state is known to have already conducted two nuclear tests -- one in 2006 that was judged largely to be a failure and another in 2009 and was seen as more successful. A Revival of the Six-Party Talks? Four Steps the DPRK Can Take to Resuscitate Diplomacy. Daniel Pinkston, Strong and Prosperous 2011: Crisis Group's Blog on Korea | 26 Jul 2011 North and South Korean diplomats held informal talks during the ASEAN Regional Forum meeting last week in Indonesia and declared they would work together to “re-start the Six-Party Talks as soon as possible.” 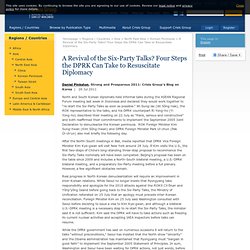 Wi Sung-lac (Wi Sŏng-nak), the ROK representative to the talks, and his DPRK counterpart Ri Yong-ho (Yi Yong-ho) described their meeting on 22 July as “frank, serious and constructive” and both reaffirmed their commitments to implement the September 2005 Joint Declaration to denuclearize the Korean peninsula. US-North Korea nuclear talks: Why return to the table now?

The two-way talks the United States will hold with North Korea in New York later this week have the announced purpose of gauging Pyongyang’s seriousness about resuming long-stalled negotiations on its nuclear-weapons program. 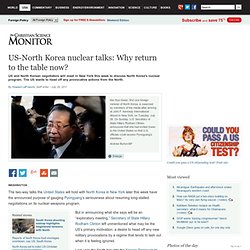 Skip to next paragraph Subscribe Today to the Monitor Click Here for your FREE 30 DAYS ofThe Christian Science MonitorWeekly Digital Edition But in announcing what she says will be an “exploratory meeting,” Secretary of State Hillary Rodham Clinton left unmentioned what may be the US’s primary motivation: a desire to head off any new military provocations by a regime that tends to lash out when it is feeling ignored. North Korea digging tunnels for likely nuclear test - report. SEOUL (Reuters) - North Korea is digging tunnels at a site where it has launched two nuclear tests, suggesting it is preparing a third, the South's Yonhap news agency said on Sunday, a development which would trigger concern across the region. Tensions rose on the divided peninsula when 46 sailors were killed in an attack in March on a South Korean naval vessel.

North Korea, which has denied responsibility, shelled the southern island of Yeonpyeong in November, killing four people and sparking fears of possible all-out war. The North was excavating several tunnels before picking the most suitable, Yonhap said, citing an unnamed South Korean government source. Pyongyang Pig Factory. This image of a North Korean Scud (or Nodong) missile has appeared here before — in black-and-white. 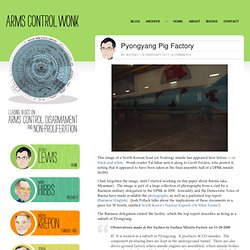 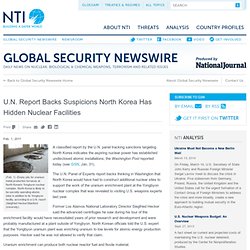 The U.N. Panel of Experts report backs thinking in Washington that North Korea would have had to construct additional nuclear sites to support the work of the uranium enrichment plant at the Yongbyon nuclear complex that was revealed to visiting U.S. weapons experts last year. Former Los Alamos National Laboratory Director Siegfried Hecker said the advanced centrifuges he saw during his tour of the enrichment facility would have necessitated years of prior research and development and were probably manufactured at a plant outside of Yongbyon. 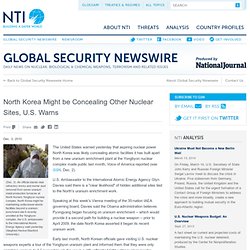 U.S. Ambassador to the International Atomic Energy Agency Glyn Davies said there is a "clear likelihood" of hidden additional sites tied to the North's uranium enrichment work. Speaking at this week's Vienna meeting of the 35-nation IAEA governing board, Davies said the Obama administration believes Pyongyang began focusing on uranium enrichment -- which would provide it a second path for building a nuclear weapon -- prior to April 2009, the date North Korea asserted it began its recent uranium work. Recently leaked U.S. Officials in Seoul have voiced skepticism about the information, however. Rejects Nuclear Talks With North Korea. PrintShareEmailTwitterFacebookLinkedIn The Obama administration said yesterday there was no reason now to resume nuclear negotiations with North Korea, Agence France-Presse reported (see GSN, Dec. 21). 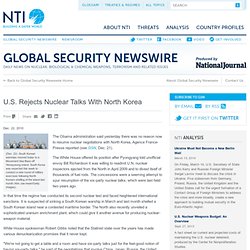 The White House offered its position after Pyongyang told unofficial envoy Bill Richardson it was willing to readmit U.N. nuclear inspectors ejected from the North in April 2009 and to divest itself of thousands of fuel rods. U.S. Moves Spy Aircraft in Preparation for N.Korean Nuke Test. The U.S. 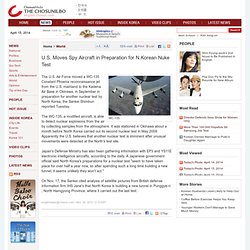 Air Force moved a WC-135 Constant Phoenix reconnaissance jet from the U.S. mainland to the Kadena Air Base in Okinawa, in September in preparation for another nuclear test by North Korea, the Sankei Shimbun reported Tuesday. The WC-135, a modified aircraft, is able to detect nuclear explosions from the air by collecting samples from the atmosphere. It was stationed in Okinawa about a month before North Korea carried out its second nuclear test in May 2009.

Apparently the U.S. believes that another nuclear test is imminent after unusual movements were detected at the North's test site. Japan's Defense Ministry has also been gathering information with EP3 and YS11E electronic intelligence aircrafts, according to the daily. North Korea’s Mixed Messages, by Joshua Pollack. To place a new nuclear facility at Yongbyon is to prepare it for exhibition. Nothing else makes that point as well as the easily overlooked third new building mentioned in Sig Hecker’s latest trip report, after the light-water reactor (LWR) and the gas centrifuge enrichment plant (GCEP): “the new three-story Guest House.” Decoded, the message reads: Come visit Yongbyon, where sanctions aren’t working. NORK Enrichment Facility, by Jeffrey Lewis. Fuel Fabrication Facility. Empty Machine Shop from which lathes have been removed. Exhaust ducts are still in place.