Job survival in the age of robots and intelligent machines. It is a sobering thought that in ten years, around 65% of the jobs that people will be doing have not even been thought of yet, according to the US Department of Labor. 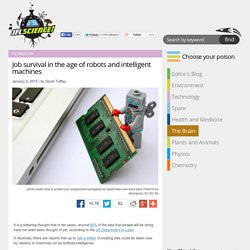 In Australia, there are reports that up to half a million of existing jobs could be taken over by robotics or machines run by artificial intelligence. So with smarter computers taking on more of the work that people currently do, we are left to wonder what jobs there might be left for us humans. Robot Learns To Cook Watching YouTube Videos. While many of us might use YouTube to get our daily fix of adorable or hilarious cat videos, the site can also be a very useful learning platform. 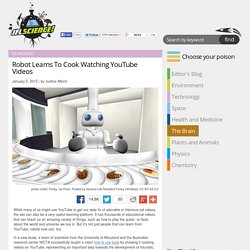 It has thousands of educational videos that can teach us an amazing variety of things, such as how to play the guitar, or facts about the world and universe we live in. But it’s not just people that can learn from YouTube; robots now can, too. Amber Case: We are all cyborgs now. Cyborgenic Reengineering the Human Body. Ken Goldberg: 4 lessons from robots about being human. Cynthia Breazeal: The rise of personal robots. Why Asimov's Three Laws Of Robotics Can't Protect Us. 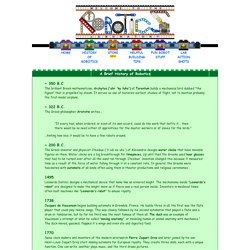 It serves as one of histories earliest studies of flight, not to mention probably the first model airplane. ~ 322 B.C. A Brief History of Robotics. Inside the Japanese Hotel Staffed by Robots.