Loneliness: Does Virtual Reality Create Isolation. There are a lot of concerns shared nowadays about the new wave of virtual reality media. 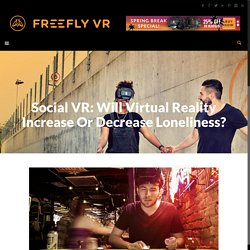 It has been decades since the concept was first used in sci-fi as a dystopian tool to isolate and control the masses – a vision that has not left the minds of many, considering the response to that image of Mark Zuckerberg apparently presiding over an army of Oculus storm troopers! But are these wary types right to fear the impact of Virtual Reality on our sense of belonging and its power to increase loneliness? Anxiety / Stress Relief and Relaxation Using Neuro-Programmer. Stress Reduction Anxiety and stress are growing problems in today's society, where work hours are long, vacations are rare and there is very little physical activity to vent the adrenalin produced during stressful situations. 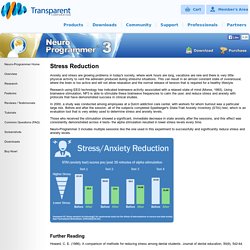 This can result in an almost constant state of overarousal, where the brain is too active and will not allow relaxation and the normal release of tension that is required for a healthy lifestyle. Research using EEG technology has indicated brainwave activity associated with a relaxed state of mind (Morse, 1993). Using brainwave stimulation, NP3 is able to stimulate these brainwave frequencies to calm the user, and reduce stress and anxiety with protocols that have demonstrated success in clinical studies. In 2000, a study was conducted among employees at a Dutch addiction care center, with workers for whom burnout was a particular large risk.

How to relieve stress: technology to help you chill. Stress is sometimes called the ‘Epidemic of the 21st century’. 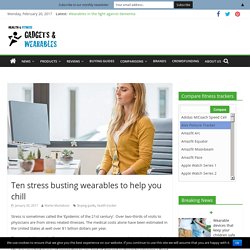 Over two-thirds of visits to physicians are from stress related illnesses. The medical costs alone have been estimated in the United States at well over $1 billion dollars per year. This is probably not the first article you read on increasing stress and stress levels in today’s society, and it certainly won’t be the last. Stress has always been an unavoidable reality of of life. It is your body’s way of responding to any kind of demand or threat by releasing a flood of stress hormones, including adrenaline and cortisol, which rouse the body for emergency action. Tech to take the stress out of stress. Image copyright Thinkstock Mairin Philips (not her real name) suffered from anxiety, so much so that it made the pain from a stomach ulcer far worse. 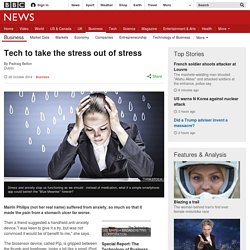 Then a friend suggested a handheld anti-anxiety device. "I was keen to give it a try, but was not convinced it would be of benefit to me," she says. The biosensor device, called Pip, is gripped between the thumb and forefinger, looks a bit like a small iPod, and measures sweat and electrodermal activity associated with stress levels. People working to manage their anxiety can then play a number of games like Relax & Race, where relaxing confers a competitive advantage. 12 Mobile Apps That Help Relieve Stress And Anxiety : TECH : Tech Times. Everyone wants to be happy, that's for sure. 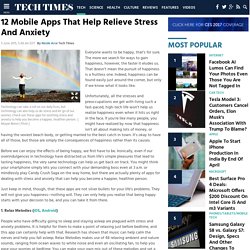 The more we search for ways to gain happiness, however, the faster it eludes us. That doesn't mean the pursuit of happiness is a fruitless one. With Cutting Edge Technology, New Way to Reduce Anxiety Symptoms Discovered. Brain & Behavior Research Foundation Scientific Council Member and three-time NARSAD Grantee, Rene Hen, Ph.D. of Columbia University Medical Center (CUMC) led a team of researchers that may have found a way to reduce anxiety in post-traumatic stress disorder (PTSD) and panic disorder, without negatively affecting learning. 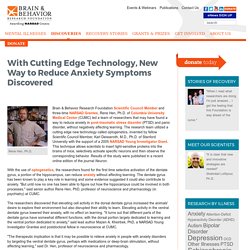 The research team utilized a cutting edge new technology called optogenetics, invented by fellow Scientific Council Member, Karl Deisseroth, M.D., Ph.D. of Stanford University with the support of a 2005 NARSAD Young Investigator Grant. This technique allows scientists to insert light-sensitive proteins into the brains of mice, selectively activate specific neurons and then observe the corresponding behavior. Results of the study were published in a recent online edition of the journal Neuron. Read the news release containing complete details of this study. 10 stress relief gadgets for designers. January can be a tough time; all that festive partying, darkened afternoons and chilly weather means that inspiration and motivation can often be more difficult than usual. 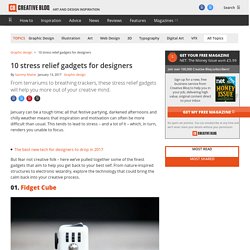 This tends to lead to stress – and a lot of it – which, in turn, renders you unable to focus. The best new tech for designers to drop in 2017 But fear not creative folk – here we’ve pulled together some of the finest gadgets that aim to help you get back to your best self. From nature-inspired structures to electronic wizardry, explore the technology that could bring the calm back into your creative process. Biofeedback and Wearable Tech for Stress, Meditation and Fitness. Harvard Stress Forum: Can We Use Technology to Become More Mindful? Technology is often considered a main contributor to our chronically stressed-out lives rather than a tool for stress relief and mindfulness. 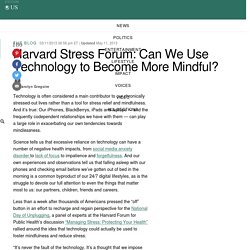 And it’s true: Our iPhones, BlackBerrys, iPads and laptops — and the frequently codependent relationships we have with them — can play a large role in exacerbating our own tendencies towards mindlessness. Science tells us that excessive reliance on technology can have a number of negative health impacts, from social media anxiety disorder to lack of focus to impatience and forgetfulness. And our own experiences and observations tell us that falling asleep with our phones and checking email before we’ve gotten out of bed in the morning is a common byproduct of our 24/7 digital lifestyles, as is the struggle to devote our full attention to even the things that matter most to us: our partners, children, friends and careers.

“It’s never the fault of the technology. 'Technology increases anxiety; it also tackles it' When my parents’ generation were growing up, teenage girls (I'm reliably informed) worried about whether 'hot George' at school would ring or not, because they had to wait physically next to the telephone. 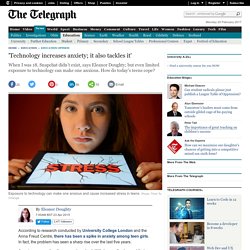 University pressure was less of a worry, because it wasn’t such an expectation that you’d go – nor is it now, for everyone, but it is for some. When my mother tells me – as she is wont to, at every available juncture – that ‘nothing has changed since I was your age’ she is half right. In a way, it hasn’t – the base level stuff, the mechanics of life. But the culture has. Depression Is an Allergic Reaction to Modern Life. By Orion Jones While the symptoms of depression are marked by changes in the brain, the cause of the disease may ultimately lie in the body, specifically in a family of proteins called cytokines that set off inflammation. 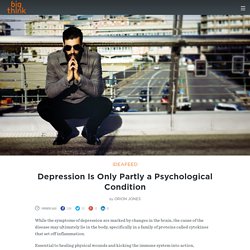 Essential to healing physical wounds and kicking the immune system into action, inflammation tells the body it is ill. And as everyone knows, having an illness easily triggers a negative mindset that can easily turn depressive in cases of prolonged or chronic health problems. What physicians call "sickness behavior" is remarkably similar to depression: an unwillingness to get out of bed, eat well, or be productive. While being physically ill causes inflammation, it is far from being the only cause.

The Innovation of Loneliness. NIMH » Technology and the Future of Mental Health Treatment. Introduction Technology has opened a new frontier in mental health support and data collection. Mobile devices like cell phones, smartphones, and tablets are giving the public, doctors, and researchers new ways to access help, monitor progress, and increase understanding of mental wellbeing. How you can fight depression through technology and mobile apps. Forbes Welcome. 5 Ways Technology Might Be Feeding Your Depression. One of the most troubling things about technology is its correlation with increased rates of depression, particularly in people who spend a lot of time on computers.

It’s not surprising though, once you realize that computers can ruin our sleep habits and affect us in other ways mentally. 5 Reasons Working With Computers Is Bad For You & How to Stay Healthy 5 Reasons Working With Computers Is Bad For You & How to Stay Healthy Working on the computer may sound like the most relaxed job in the world, but it's quite the contrary. It's very tough on your body, which is not used to this modern type of work.... Read More. Can Digital Technologies Help Manage Depression? – Tincture. I have never suffered from depression but witnessed it with a close friend. I’m not talking about the sadness that comes from heartbreaks or fighting with a loved one. The depression I saw was the one that comes without a precipitating event. Can Technology Help Treat Depression? « Inside Health News. By Sonya Collins WebMD Health News What are we learning about our brain and mental health? Amit Etkin, MD, PhD, assistant professor of psychiatry and behavioral sciences at Stanford University, spoke on that topic as part of an expert panel at the Association of Health Care Journalists annual conference last week.

WebMD spoke to Etkin about how technology is helping us learn more about the causes and treatment of depression and other mental illness.