Plug-ins. Fusion 7 now free and coming to Mac: complete version of the After Effects and Nuke rival given away by Blackmagic. Want to get your hands on a new VFX tool without spending a penny? 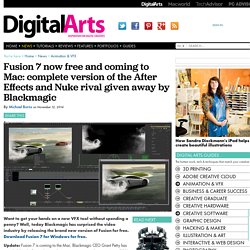 Well, today Blackmagic has surprised the video industry by releasing the brand new version of Fusion for free. Download Fusion 7 for Windows for free. Update: Fusion 7 is coming to the Mac. Blackmagic CEO Grant Petty has revealed that the famously Mac-loving company is working on a Mac OS X version of Fusion. More details at the bottom of this story. There are two versions of Fusion 7. Fusion 7 features an infinite 3D workspace and a node based workflow for quickly building unlimited effects. Fusion 7 also lets customers import and render 3D geometry and scenes from other applications as well as create their own elements from scratch. The software has been used in many Hollywood blockbusters, TV series and high-end commercials, but tended to be restricted to the elite end of the visual effects market. "From a company point of view anything that gives the best artists the tools they need is welcome," Moore told us.

After Effects & Photoshop tutorial: Animate your drawings into a beautiful cartoon. 60 Free Adobe After Effects Text Effects Tutorials. If you find this article, you'll find out many practical tutorials to help you how to learning make a gorgeous character animation text effects, which you'll used to media advertising and promotional products. 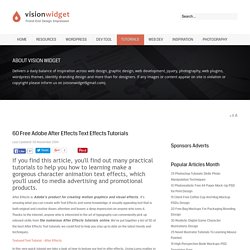 After Effects is Adobe’s product for creating motion graphics and visual effects. It’s amazing what you can create with Text Effects and some knowledge, A visually appealing text that is both original and creative draws attention and leaves a deep impression on anyone who sees it. Thanks to the internet, anyone who is interested in the art of typography can conveniently pick up relevant skills from the numerous After Effects tutorials online. We’ve put together a list of 50 of the best After Effects Text tutorials we could find to help you stay up to date on the latest trends and techniques. In this very quick tutorial we take a look at how to texture our text in after effects. This tutorial will teach you how to use a lens flare in an original way. VIDEO COPILOT. After Effect. FxFactory. FxFactory supports After Effects CS6, After Effects CC and the new After Effects CC 2014. 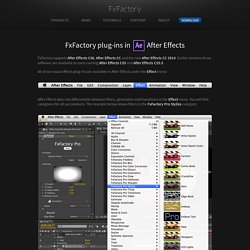 Once a filter has been applied, it can be configured via the Effect Controls palette: Applying Generators Generators can only be applied to an existing layer, whose content is usually overwritten by the generator. Applying Transitions. FBX to AE - The art of Davide Franceschini. After Effects Tutorials, Plug-ins and Stock Footage for Post Production Professionals. 52 amazing After Effects tutorials. Want to know how to do something in After Effects? 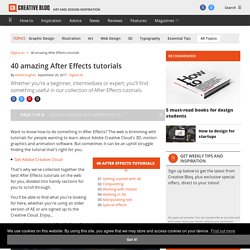 The web is brimming with tutorials for people wanting to learn about Adobe Creative Cloud's 3D, motion graphics and animation software. But sometimes it can be an uphill struggle finding the tutorial that's right for you. So here we've collected together the best After Effects tutorials on the web for you. These are the sections we've divided them into: You should be able to find what you're looking for here whether you're using an older version of AE or are signed up to the Creative Cloud – if not, let us know what topics we're missing in the comments below! 01. Even if you're only just getting started with After Effects, it's only natural to want to create some impressive effects straight away, and so this tutorial from Adobe is just the ticket. 02. These After Effects tutorials from Digital Tutors take an introductory look into the software and compositing in general. 03. 04.

Its main purpose is for film and video post-production.