How to stop workers being exploited in the gig economy. Hot on the heels of the gig economy company Foodora shutting up shop in Australia amid accusations about its labour abuses, a Senate Committee report has recommended more robust laws to protect gig economy workers. 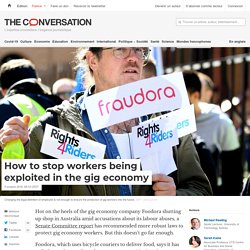 But this doesn’t go far enough. Foodora, which uses bicycle couriers to deliver food, says it has pulled out of Australia to focus on opportunities in other countries. Legal cases against it might also have had something to do with it. The Fair Work Ombudsman took the company to court for sham contracting – treating its employees as independent contractors to avoid paying minimum wages, annual leave, sick leave and superannuation. Working from home – News, Research and Analysis – The Conversation – page 1. We asked 1,400 managers to rate working from home. 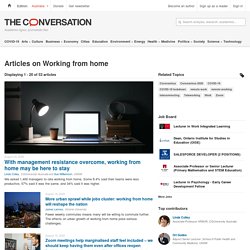 Some 8.4% said their teams were less productive, 57% said it was the same, and 34% said it was higher. Fewer weekly commutes means many will be willing to commute further. The effects on urban growth of working from home pose serious challenges. Submissions. Sub123 Att01 Association of Professional Staffing Companies of Australia. Women are dominating employment growth, but what sort of jobs are we talking about?

One of the biggest transformations we have seen in advanced economies is the increased participation of women in the paid workforce. 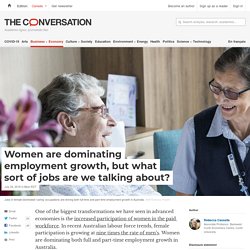 What is driving the increase for women? On the other hand, several factors are likely to be contributing to the overall decline in male participation. A statistical snapshot of women in the Australian workforce. The Future of Work in Australia analytical report11. Sub53 Australian Information Industry Association. Coronavirus Australia: Melbourne, Sydney COVID-19 cases force tumble in jobs, female consumer confidence. The substantial falls in the nation's two largest jobs markets suggest the July employment report could see a further spike in the official measure of unemployment, which reached a 22-year high of 7.4 per cent last month. 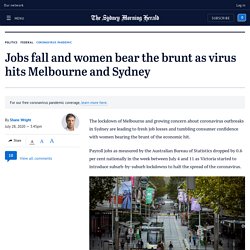 Related Article Women, many of whom are on part-time or casual work in areas such as accommodation and the arts, suffered a major hit following the Victorian shutdown. While payroll jobs held by men fell by 0.2 per cent in the second week of July, they dropped by 1.1 per cent for women. Gender workplace statistics at a glance 2020. Part-time refers to all employed persons who usually worked less than 35 hours a week and either did so during the reference week or did not work that week. 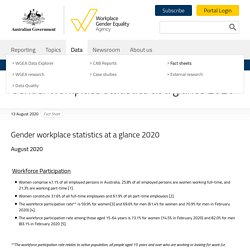 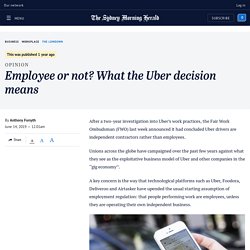 It can step in on behalf of workers through test cases to determine their employment status. In June 2017, the FWO decided to investigate whether Uber’s engagement of its 60,000-plus ‘‘driver partners’’ is compliant with the Fair Work Act and other federal laws. The answer hinges on whether an employment relationship exists between Uber and each driver. Almost two thirds of Australians rely on gig economy platforms, study finds - Australasia's Cleaning Industry and Environmental Technology Magazine. Australia’s largest ever study regarding on-demand economy releases latest findings. 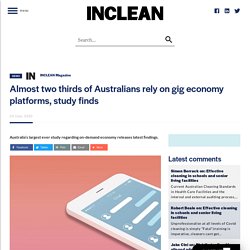 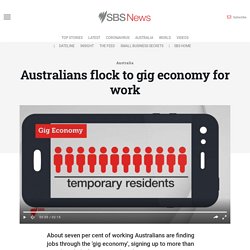 More than 14,000 people across Australia completed a survey commissioned for the Victorian government's inquiry into the on-demand workforce. Lead researcher, Queensland University of Technology's Paula McDonald, said the proportion of people using the gig economy to find work was higher than some previous estimates, but the new figure aligns with recent European surveys.

"We were reasonably surprised at just the number of platforms people mentioned ... more than 100," she told AAP. "It's possible now for a really wide variety of work to be undertaken through platforms from caring to writing and translation, to web design, computer programming, to odd jobs and maintenance and skilled trades work. " NSW has the highest level of gig economy workers (7.9 per cent), followed by Victoria (7.4 per cent). Coronavirus has forced Australians to work from home, but what are the impacts on CBDs? - ABC News.