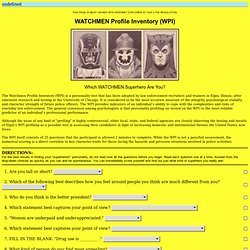 WATCHMEN Profile Inventory (WPI) Which WATCHMEN Superhero Are You? The Watchmen Profile Inventory (WPI) is a personality test that has been adopted by law enforcement recruiters and trainers in Elgin, Illinois, after extensive research and testing at the University of Chicago. It is considered to be the most accurate measure of the integrity, psychological stability, and character strength of future police officers. Although the issue of any kind of "profilng" is highly controversial, other local, state, and federal agencies are closely observing the testing and results of Elgin's WPI profiling as a possible tool in assessing their candidates in light of increasing domestic and international threats the United States now faces.

The WPI itself consists of 25 questions that the participant is allowed 2 minutes to complete. Click on your WPI Score below to reveal your costumed alter ego. Alan Moore Portal: Watchmen. Watchmen. This page is similar in name or subject to other pages. 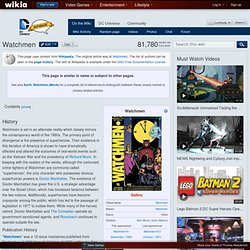 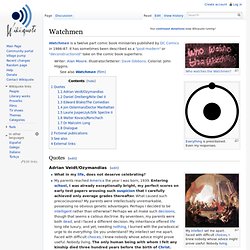 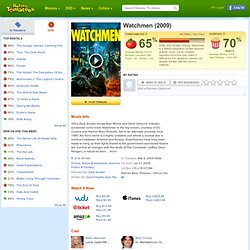 If you haven't read the source material I think you're going to dislike it even more than I did. So yeah, it's sort of bad news around here. Great book, mediocre adaptation. Watchmen left me looking at the exit far more often than at the screen. Zack Snyder's film version of Watchmen is a grim and grisly excursion into comic-book mythology. Watchmen (film)

The film was released in both conventional and IMAX theaters on March 6, 2009, grossing $55 million on the opening weekend, and grossed over $185 million at the worldwide box office. 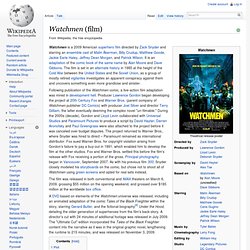 A DVD based on elements of the Watchmen universe was released, including an animated adaptation of the comic Tales of the Black Freighter within the story, starring Gerard Butler, and the fictional biography[4] Under the Hood, detailing the older generation of superheroes from the film's back-story. A director's cut with 24 minutes of additional footage was released in July 2009. Watchmen: Motion Comic. Plot[edit] Episodes[edit] International broadcasters[edit] 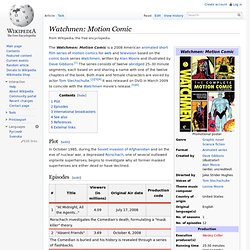 Saturday Morning Watchmen. Screenshot of the Watchmen gathered together Contents[edit] 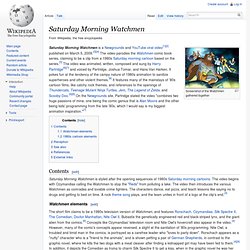 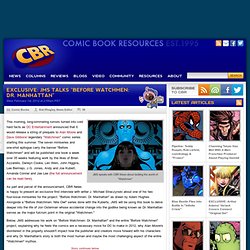 The seven miniseries and one-shot epilogue carry the banner "Before Watchmen" and will be published one book a week over 35 weeks featuring work by the likes of Brian Azzarello, Darwyn Cooke, Len Wein, John Higgins, Lee Bermejo, J.G. Jones, Andy and Joe Kubert, Amanda Conner and Jae Lee (the full announcement can be read here).

As part and parcel of the announcement, CBR News is happy to present an exclusive first interview with writer J. Alan Moore: 'I Don't Want Watchmen Back' Hungry for some comics intrigue? 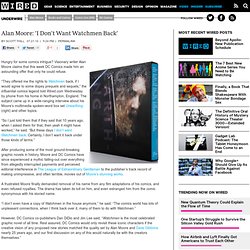 Visionary writer Alan Moore claims that this week DC Comics made him an astounding offer that only he could refuse. “They offered me the rights to Watchmen back, if I would agree to some dopey prequels and sequels,” the influential comics legend told Wired.com Wednesday by phone from his home in Northampton, England. The subject came up in a wide-ranging interview about his Moore’s multimedia spoken-word box set Unearthing (right) and other topics.

“So I just told them that if they said that 10 years ago, when I asked them for that, then yeah it might have worked,” he said. “But these days I don’t want Watchmen back. Before Watchmen. Publication history[edit] Gibbons stated, The original series of Watchmen is the complete story that Alan Moore and I wanted to tell. 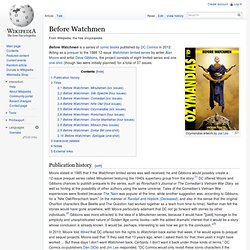 However, I appreciate DC's reasons for this initiative and the wish of the artists and writers involved to pay tribute to our work. May these new additions have the success they desire.[5] Rorschach (comics) In trying to create Rorschach, Moore said he was trying to "come up with this quintessential Steve Ditko character — someone who's got a funny name, whose surname begins with a 'K,' who's got an oddly designed mask".[6] On how he decided Rorschach's name, Moore recalls: [...] Rorschach, was perhaps the most disturbing hero ever created for comics. His brutal perception of black-and-white morality reflected writer Alan Moore's critical deconstruction of the whole notion of heroes - a popular theme recurring in comic books since the 1980s. Moore stated that Rorschach was created as a way of exploring what an archetypical Batman-type character — a driven, vengeance-fueled vigilante — would be like in the real world. Ozymandias (comics) Adrian Alexander Veidt was born in 1939, and is the son of wealthy German immigrant parents.

As a child, he received high grades in school, and it was noted that he was very intelligent. He then hid this information from his elders and peers by deliberately achieving average marks. After his parents' deaths, he inherited their substantial fortune at the young age of 17, but he chose to give it all to charity and embark on a vision quest, following the route of his childhood idol Alexander the Great. List of Watchmen characters. The six main characters of the 1986 comic booklimited seriesWatchmen (from left to right): Ozymandias, the second Silk Spectre, Doctor Manhattan, the Comedian (kneeling), the second Nite Owl and Rorschach. Main characters[edit] The Comedian [edit] Blake's murder, which takes place shortly before the story begins in 1985, sets the plot of Watchmen in motion. The character appears throughout the story in flashbacks and aspects of his personality are revealed by other characters.[5] Richard Reynolds described The Comedian as "ruthless, cynical, and nihilistic, and yet capable of deeper insights than the others into the role of the costumed hero".[5] Nicholas Michael Grant said the Comedian is "the only character in the Watchmen universe who is almost totally unlikeable.

Dave Gibbons. Early life[edit] Dave Gibbons was born at Forest Gate Hospital in London, England, on 14 April 1949 to Chester, a town planner, and Gladys, a secretary. He began reading comic books at the age of seven. A self-taught artist, he illustrated his own comic strips. Gibbons became a building surveyor but eventually entered the UK comics industry as a letterer for IPC Media. He left his surveyor job to focus on his comics career.[2] British comics work[edit] Alan Moore. Alan Moore (born 18 November 1953) is an English writer primarily known for his work in comic books including Watchmen, V for Vendetta, and From Hell.[1] Frequently described as the best graphic novel writer in history,[2][3] he has been called "one of the most important British writers of the last fifty years".[4] He has occasionally used such pseudonyms as Curt Vile, Jill de Ray, Translucia Baboon and The Original Writer.

Moore is an occultist, ceremonial magician,[6] and anarchist,[7] and has featured such themes in works including Promethea, From Hell, and V for Vendetta, as well as performing avant-garde spoken word occult "workings" with The Moon and Serpent Grand Egyptian Theatre of Marvels, some of which have been released on CD. Early life[edit] "LSD was an incredible experience. Not that I'm recommending it for anybody else; but for me it kind of – it hammered home to me that reality was not a fixed thing.

Watchmen. Moore used the story as a means to reflect contemporary anxieties and to critique the superhero concept. Watchmen Wiki. The Annotated Watchmen. Chapter 1: "At Midnight, All the Agents... " Certain notes are true for each issue. This issue's title is from Bob Dylan's "Desolation Row. " Cover: First appearance of the blood-spattered smiley-face button. The button belonged to the Comedian, who we first see in flashback on page 2.