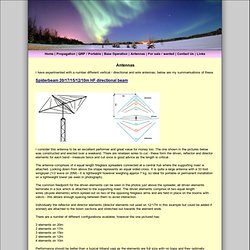 Spiderbeam 20/17/15/12/10m HF directional beam I consider this antenna to be an excellent performer and great value for money too. The one shown in the pictures below was constructed and erected over a weekend. There are nineteen wires to cut - these form the driven, reflector and director elements for each band - measure twice and cut once is good advice as the length is critical. 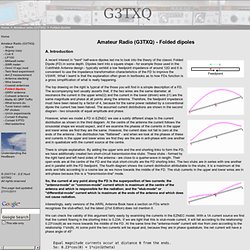 Introduction A recent interest in "bent" half-wave dipoles led me to look into the theory of the classic Folded Dipole (FD) in some depth. Dipoles bent into a square shape - for example those used in the CobWebb Antenna design - typically exhibit a low feedpoint impedance of around 12Ω and it is convenient to use the impedance transformation characteristics of the FD to improve the VSWR. What I learnt is that the explanation often given in textbooks as to how FDs function is a gross simplification of what is really happening. The top drawing on the right is typical of the those you will find in a simple description of a FD. However, when we model a FD in EZNEC we see a subtly different shape to the current distribution as shown in the third diagram.

There is simple explanation. Interestingly, early versions of the ARRL Antenna Book have a section on FDs which recognises the stub-effect, but the latest (21st Edition) does not mention it. B. I) Tuning ii) Bandwidth C. Cobweb Antenna. During recent range testing of a hexbeam I needed a horizontally-polarised resonant antenna covering 20m thru 10m which could be assembled and disassembled quickly and easily. 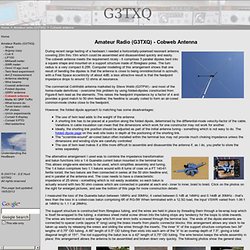 The cobweb antenna meets the requirement nicely - it comprises 5 parallel dipoles bent into a square shape and mounted on a support structure made of fibreglass poles. The turn radius is a very compact 6.25ft. Computer modelling of this arrangement shows that one result of bending the dipoles is that the antenna is close to being omnidirectional in azimuth, with a Free Space eccentricity of about 4dB; a less attractive result is that the feedpoint impedance drops to around 12 ohms at resonance. Traduction. Cobwebb antenna a home brew by G4ZFQ, a few notes about this aerial. G4ZFQ'S VERSION OF THE COBWEBB Antenna. 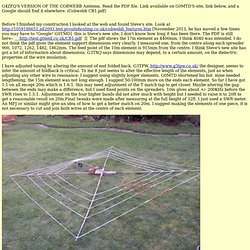 Read the PDF file. Link available on G0MTD'S site, link below, and a Google should find it elsewhere. (Cobwebb CB1.pdf) Before I finished my construction I looked at the web and found Steve's site. Look at [November 2013, he has moved a few times you may have to "Google" G0TMD] this is Steve's new site, I don't know how long it has been there. I have adjusted tuning by altering the amount of end folded back. The overall view. My construction method, a second clamp is on the other piece of aluminum angle. I did not like the Cobwebb feed I saw, the connector block had seriously corroded.

November 2011 Another way of making and matching the dipoles maybe easier to match but not so easy too keep water out. I think hot melt glue is wonderful! Performance:- Early days yet! I have realised that resonant dipoles may appear to perform better than multiband antennas that require (ATU) matching units because of the losses in the matching components. The G3TPW CobWebb HF Antenna website. bWebb Introduction. G3TPW CobWebb Antenna for the 14, 18, 21, 24 and 28 MHz Bands The main advantages of the CobWebb over other 5 band 14 to 28 MHz antennas are that it is small, lightweight, strong (made from fibre glass), only requires a single support, needs no rotator, gives full size dipole performance on all 5 HF bands (without the end on nulls that straight dipoles suffer from), is fed by a single 50 ohm co-ax cable (via an in built air core choke balun), and most important of all, it produces a pure horizontally polarised signal with a confined electric field. 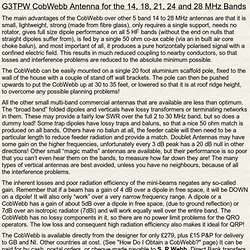 This results in much reduced coupling to nearby conductors, so that losses and interference problems are reduced to the absolute minimum possible. The CobWebb can be easily mounted on a single 20 foot aluminium scaffold pole, fixed to the wall of the house with a couple of stand off wall brackets. All the other small multi-band commercial antennas that are available are less than optimum. Back to front page. CobWebb : construction antenne radioamateur multibande HF et omni-directionnelle. L’antenne CobWebb de G3TPW est compacte, légère, multi-bandes, antenne omni-directionnelle avec des performances digne d’une antenne en taille réelle ! 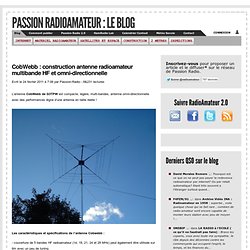