CME impact! This is now the largest solar radiation storm since October 2003. CME Impact is here! 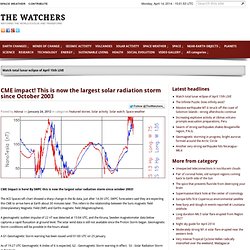 By SWPC this is now the largest solar radiation storm since october 2003! The ACE Spacecraft chart showed a sharp change in the Bz data, just after 14:30 UTC. SWPC forecasters said they are expecting this CME to arrive here at Earth about 30 minutes later. This refers to the relationship between the Suns magnetic field (Interplanetary Magnetic Field (IMF) and Earths magnetic field (Magnetosphere). A geomagnetic sudden impulse of 22 nT was detected at 15:04 UTC, and the Kiruna, Sweden magnetometer data below captures a rapid fluxuation at ground level. A G1-Geomagnetic Storm warning has been issued until 01:00 UTC on 25 January. As of 19:27 UTC Geomagnetic K-Index of 6 is expected, G2 - Geomagnetic Storm warning in effect. Protons greater than 10 MeV increased to around 6300 pfu. GOES Proton flux on Tuesday, Jan 24 at 16:30UTC Kiruna magnetogram on Tuesday, Jan 24 2012 after sudden geomagnetic impulse at 15:04 UTC Proton flux on Tuesday, Jan 24 2012 at 18:21 UTC.

Why Libertarians Must Deny Climate Change. As soon as it encounters environmental issues, the ideology of the new right becomes ensnared in its own contradictions. 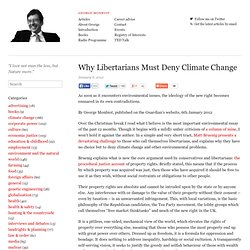 By George Monbiot, published on the Guardian’s website, 6th January 2012 Over the Christmas break I read what I believe is the most important environmental essay of the past 12 months. Though it begins with a mildly unfair criticism of a column of mine, I won’t hold it against the author. In a simple and very short tract, Matt Bruenig presents a devastating challenge to those who call themselves libertarians, and explains why they have no choice but to deny climate change and other environmental problems. Bruenig explains what is now the core argument used by conservatives and libertarians: the procedural justice account of property rights. Their property rights are absolute and cannot be intruded upon by the state or by anyone else. “Almost all uses of land will entail some infringement on some other piece of land that is owned by someone else.

Www.monbiot.com. Australia endures record heatwave. Australians have been asked to heed safety advice from authorities as much of the country swelters through what is already shaping up to be a record-breaking heatwave. 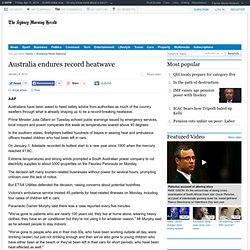 Prime Minister Julia Gillard on Tuesday echoed public warnings issued by emergency services, local mayors and power companies this week as temperatures soared above 40 degrees. In the southern states, firefighters battled hundreds of blazes in searing heat and ambulance officers treated children who had been left in cars. On January 1, Adelaide recorded its hottest start to a new year since 1900 when the mercury reached 41.6C. Advertisement Extreme temperatures and strong winds prompted a South Australian power company to cut electricity supplies to about 3300 properties on the Fleurieu Peninsula on Monday. The decision left many tourism-related businesses without power for several hours, prompting criticism over the lack of notice. But ETSA Utilities defended the decision, raising concerns about potential bushfires. Record heatwave in australia. Plus 40.000 hectares brûlés dans des incendies au Chili. Record heatwave in Australia - hottest start of the year in more than a century.

Australians have been asked to heed safety advice from authorities as much of the country swelters through what is already shaping up to be a record-breaking heatwave. 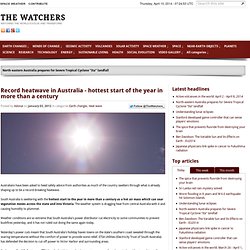 South Australia is sweltering with the hottest start to the year in more than a century as a hot air mass which can sear vegetation moves across the state and into Victoria. The weather system is dragging heat from central Australia with it and causing humidity to plummet. Weather conditions are so extreme that South Australia's power distributor cut electricity to some communities to prevent bushfires yesterday, and it has not ruled out doing the same again today. Yesterday's power cuts meant that South Australia's holiday haven towns on the state's southern coast sweated through the soaring temperatures without the comfort of power to provide some relief.

ETSA Utilities (Electricity Trust of South Australia) has defended the decision to cut off power to Victor Harbor and surrounding areas. Find detailed info on bom.gov.au.