Court oversight? a look inside a secret and empty process

Free Snowden. Fourth Amendment to the United States Constitution. Because the Bill of Rights did not initially apply to the states, and federal criminal investigations were less common in the first century of the nation's history, there is little significant case law for the Fourth Amendment before the 20th century. 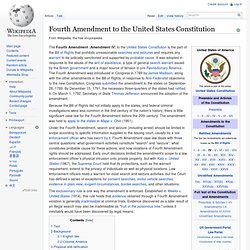 The amendment was held to apply to the states in Mapp v. Ohio (1961). Under the Fourth Amendment, search and seizure (including arrest) should be limited in scope according to specific information supplied to the issuing court, usually by a law enforcement officer who has sworn by it. Fourth Amendment case law deals with three central questions: what government activities constitute "search" and "seizure"; what constitutes probable cause for these actions; and how violations of Fourth Amendment rights should be addressed. Early court decisions limited the amendment's scope to a law enforcement officer's physical intrusion onto private property, but with Katz v.

Oliver Stone on NSA Spying. Balkinization. Fisa court oversight: a look inside a secret and empty process. (updated below [Wed.]) 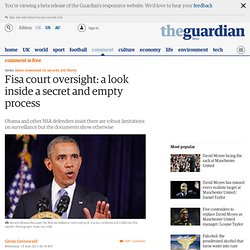 Since we began began publishing stories about the NSA's massive domestic spying apparatus, various NSA defenders – beginning with President Obama - have sought to assure the public that this is all done under robust judicial oversight. "When it comes to telephone calls, nobody is listening to your telephone calls," he proclaimed on June 7 when responding to our story about the bulk collection of telephone records, adding that the program is "fully overseen" by "the Fisa court, a court specially put together to evaluate classified programs to make sure that the executive branch, or government generally, is not abusing them".

Obama told Charlie Rose last night: The GOP chairman of the House Intelligence Committee, Mike Rogers, told CNN that the NSA "is not listening to Americans' phone calls. If it did, it is illegal. In Depth Review: New NSA Documents Expose How Americans Can Be Spied on Without A Warrant. The Guardian published a new batch of secret leaked FISA court and NSA documents yesterday, which detail the particulars of how government has been accessing Americans’ emails without a warrant, in violation of the Constitution. 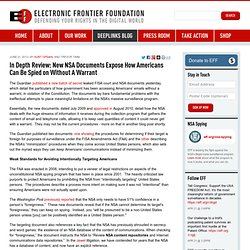 The documents lay bare fundamental problems with the ineffectual attempts to place meaningful limitations on the NSA’s massive surveillance program. Essentially, the new documents, dated July 2009 and approved in August 2010, detail how the NSA deals with the huge streams of information it receives during the collection program that gathers the content of email and telephone calls, allowing it to keep vast quantities of content it could never get with a warrant. They may not be the current procedures - more on that in another blog post shortly.

Weak Standards for Avoiding Intentionally Targeting Americans. Jorisluyendijk : Waarom democratische controle in VS over NSA sprookje is. Schokkend. David Bromwich · Diary: The Snowden Case · LRB 4 July 2013. Most Americans who know anything about the National Security Agency probably got their mental picture of it from a 1998 thriller called Enemy of the State. 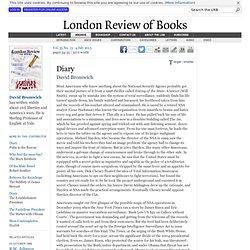 A lawyer (Will Smith), swept up by mistake into the system of total surveillance, suddenly finds his life turned upside down, his family watched and harassed, his livelihood taken from him and the records of his conduct altered and criminalised. He is saved by a retired NSA analyst (Gene Hackman) who knows the organisation from innards to brains and hates every cog and gear that drives it. This ally is a loner.

He has pulled back his way of life and associations to a minimum, and lives now in a desolate building called The Jar, which he has proofed against spying and tricked out with anti-listening armour, decoy-signal devices and advanced encryption-ware. US must fix secret Fisa courts, says top judge who granted surveillance orders. A former federal judge who granted government surveillance requests has broken ranks to criticise the system of secret courts as unfit for purpose in the wake of recent revelations by NSA whistleblower Edward Snowden. 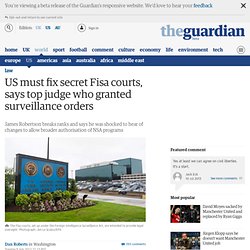 James Robertson, who retired from the District of Columbia circuit in 2010, was one of a select group of judges who presided over the so-called Fisa courts, set up under the Foreign Intelligence Surveillance Act, which are intended to provide legal oversight and protect against unnecessary privacy intrusions. But he says he was shocked to hear of recent changes to allow more sweeping authorisations of programmes such as the gathering of US phone records, and called for a reform of the system to allow counter-arguments to be heard. "A judge has to hear both sides of a case before deciding," he told members of a Privacy and Civil Liberties Oversight Board (PCLOB) recently appointed by President Obama. "What Fisa does is not adjudication, but approval.

The Snowden Effect: definition and examples. In Secret, Court Vastly Broadens Powers of N.S.A. NYT: The Laws You Can’t See. Under normal circumstances, this could be a healthy, informed debate on a matter of overwhelming importance — the debate President Obama said he welcomed in the days after the revelations of the surveillance programs. 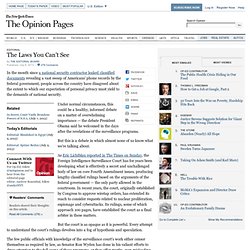 But this is a debate in which almost none of us know what we’re talking about. As Eric Lichtblau reported in The Times on Sunday, the Foreign Intelligence Surveillance Court has for years been developing what is effectively a secret and unchallenged body of law on core Fourth Amendment issues, producing lengthy classified rulings based on the arguments of the federal government — the only party allowed in the courtroom.

In recent years, the court, originally established by Congress to approve wiretap orders, has extended its reach to consider requests related to nuclear proliferation, espionage and cyberattacks. Its rulings, some of which approach 100 pages, have established the court as a final arbiter in these matters. A Secret Surveillance Program Proves Challengeable in Theory Only. Tell Congress To Act Now To End The Surveillance State. Goal: 75,000 70,029 people support this campaign. 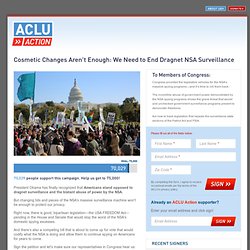 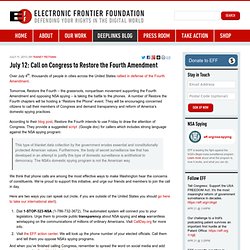 How the NSA Accesses Smartphone Data

NSA monitored calls of 35 world leaders. U.S. now bugging German ministers in place of Merkel - report. Obama knew CIA secretly monitored intelligence committee. NSA’s Secret Efforts to Hunt and Hack System Administ. Foreign Officials In the Dark About Their Own Spy Agencies' Cooperation with NSA. German Chancellor Angela Merkel One of the more bizarre aspects of the last nine months of Snowden revelations is how top political officials in other nations have repeatedly demonstrated, or even explicitly claimed, wholesale ignorance about their nations’ cooperation with the National Security Agency, as well as their own spying activities. 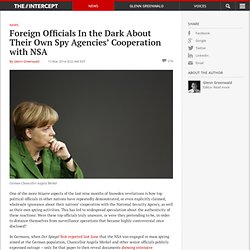 This has led to widespread speculation about the authenticity of these reactions: Were these top officials truly unaware, or were they pretending to be, in order to distance themselves from surveillance operations that became highly controversial once disclosed? In Germany, when Der Spiegel first reported last June that the NSA was engaged in mass spying aimed at the German population, Chancellor Angela Merkel and other senior officials publicly expressed outrage – only for that paper to then reveal documents showing extensive cooperation between the NSA and the German spy agency BND. EU hearing on mass surveillance w. Edward Snowden (video) Edward Snowden: US government spied on human rights workers. Edward Snowden speaks via video link with members of the Council of Europe, in Strasbourg. 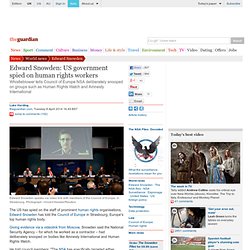 Photograph: Vincent Kessler/Reuters The US has spied on the staff of prominent human rights organisations, Edward Snowden has told the Council of Europe in Strasbourg, Europe's top human rights body. Giving evidence via a videolink from Moscow, Snowden said the National Security Agency – for which he worked as a contractor – had deliberately snooped on bodies like Amnesty International and Human Rights Watch. Eben Moglen - gonggrijp. Grilling of spy chiefs ‘a total pantomime’ The three spy bosses’ examination by MPs was ‘rehearsed and stage-managed’ (PA) AN UNPRECEDENTED public appearance by UK spy chiefs has been labelled a “total pantomime” after it emerged that they were told of questions in advance.

A private deal was struck with the heads of MI5, MI6 and GCHQ to ensure they did not face any surprises when they were grilled before an audience, sources close to Westminster’s secretive intelligence and security committee (ISC) have revealed. The agreement followed a year of delicate negotiations and was a condition for the three spy bosses to subject themselves to public cross- examination. EP LIBE #EPinquiry 11 November 2013. US and UK struck secret deal to allow NSA to 'unmask' Britons' personal data. The phone, internet and email records of UK citizens not suspected of any wrongdoing have been analysed and stored by America's National Security Agency under a secret deal that was approved by British intelligence officials, according to documents from the whistleblower Edward Snowden.

In the first explicit confirmation that UK citizens have been caught up in US mass surveillance programs, an NSA memo describes how in 2007 an agreement was reached that allowed the agency to "unmask" and hold on to personal data about Britons that had previously been off limits. The memo, published in a joint investigation by the Guardian and Britain's Channel 4 News, says the material is being put in databases where it can be made available to other members of the US intelligence and military community. Jamesrbuk : If NSA is allowed to store... Stuartmillar159 : Here's the section of top secret... US was allowed to keep UK citizen information in its database, leaked agreement shows. A 2007 agreement gave the US intelligence community access to UK citizens' phone numbers, email addresses, and IP addresses, The Guardian reports. Previous documents have described close collaboration between the NSA, GCHQ, and other national intelligence agencies, and several European countries have complained of spying on citizens or political leaders.

Scandal and Surveillance. For more than six months, Edward Snowden’s revelations about the National Security Agency (NSA) have been pouring out from the Washington Post, the New York Times, the Guardian, Germany’s Der Spiegel, and Brazil’s O Globo, among other places. Yet no one has pointed out the combination of factors that made the NSA’s expanding programs to monitor the world seem like such a slam-dunk development in Washington. The Surveillance State: Look at Outcomes, Rather Than Causes. So now that Obama has proposed what is being reported as “modest reforms” that are actually gestures enshrining and burnishing a permanent surveillance state, it is wise to look at the chess game, but working backward. The Internet is compromised. Scandal and Surveillance.