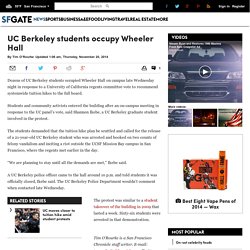 Students and community activists entered the building after an on-campus meeting in response to the UC panel’s vote, said Shannon Ikebe, a UC Berkeley graduate student involved in the protest. The students demanded that the tuition hike plan be scuttled and called for the release of a 21-year-old UC Berkeley student who was arrested and booked on two counts of felony vandalism and inciting a riot outside the UCSF Mission Bay campus in San Francisco, where the regents met earlier in the day. “We are planning to stay until all the demands are met,” Ikebe said. A UC Berkeley police officer came to the hall around 10 p.m. and told students it was officially closed, Ikebe said. Harriet Blair Rowan sur Twitter : "Cheers erupt as student who was arrested earlier today enters wheeler hall #UCBerkeley... Solidarity beats austerity. berkeley cuts. Honest Chung from UC Berkeley explains protests. The Investors’ Club: How the University of California Regents Spin Public Money into Private Profit. Category: Page One from The Berkeley Daily Planet.

[EDITOR'S NOTE: This is the introductory section of an eight-part series sponsored by the Berkeley Daily Planet in cooperation with several other publications, organized by the spot.us non-profit organization. 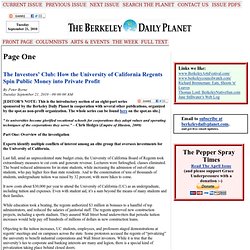 The whole series can be found here on the spot.us site.] “As universities become glorified vocational schools for corporations they adopt values and operating techniques of the corporations they serve.” – Chris Hedges (Empire of Illusion, 2009) Part One: Overview of the investigation Experts identify multiple conflicts of interest among an elite group that oversees investments for the University of California.

Last fall, amid an unprecedented state budget crisis, the University of California Board of Regents took extraordinary measures to cut costs and generate revenue. Lecturers were furloughed, classes eliminated. It now costs about $30,000 per year to attend the University of California (UC) as an undergraduate, including tuition and expenses. Occupy Cal: 39 Arrested in Forceful Crackdown on Massive Protest at UC Berkeley. This week, the Occupy movement drew thousands of California college students to protests on at least 10 campuses, including UC Irvine, UCLA, and UC Berkeley, where police forcibly removed students and arrested 39 people. 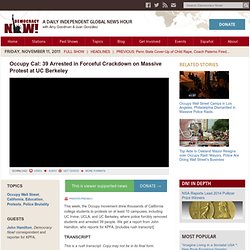 We get a report from John Hamilton, who reports for KPFA. [includes rush transcript] This is a rush transcript. Copy may not be in its final form. AMY GOODMAN: We turn now to the Occupy movement drawing thousands of California college students to protest on at least 10 campuses, including UC Irvine, UCLA, UC Berkeley, where police forcibly removed students and arrested 39 people. Occupy Berkeley. #OCCUPYBERKELEY (OCCUPYBERKELEY) Occupy Berkeley. Occupy Berkeley! Protesters plan rally Monday at UC Berkeley, walkouts at other campuses. Students protesting threatened tuition hikes in the University of California system are planning "walkouts" at multiple campuses for noon on Monday, organizers said. 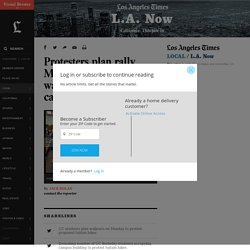 In Berkeley, where the protests began last week with the occupation of Wheeler Hall, students plan to skip classes and march through the streets. They plan to pass by local high schools to highlight the impact that proposed tuition hikes -- 5% per year over the next five years -- would have on future students. "This might stop many of them from even applying to Berkeley because it'll be so expensive," said Hannah Berkman, a UC Berkeley sophomore from West L.A. who is a spokeswoman for the protesters. Students at UC Santa Cruz and UC Davis are also planning walkouts on Monday, Berkman said.

Beyond that, the future of the protest gets a little vague, especially with the holiday coming up. Occupyberkeley' videos. Facebook: Occupy Berkeley. #OCCUPYBERKELEY. CalConnect: Occupy Berkeley. BerkleeOccupiesBOS (@BerkleeOccupies) sur Twitter. Imitating #OCCUPY To Death. In the four months since the launch of #OCCUPY, the movement has infected the body politic with uncanny viral speed. 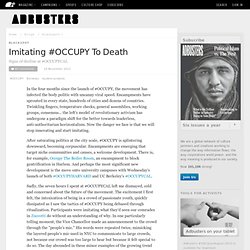 Encampments have sprouted in every state, hundreds of cities and dozens of countries. Twinkling fingers, temperature checks, general assemblies, working groups, consensus... the left's model of revolutionary activism has undergone a paradigm shift for the better towards leaderless, anti-authoritarian horizontalism. Now the danger we face is that we will stop innovating and start imitating. Yfrog.

Photos du mur. Occupy U.C. Berkeley Colbert Report "nudging" 2011-10-11 - Video Clip. Aaron Bady: Are there pictures of the... Why I Got Arrested with Occupy Cal. By Celeste Langan I participated in the Occupy Cal rally on Sproul Plaza on November 9 (my sign, "We're Afraid for Virginia Woolf," made it to the Daily Cal’s top 10) and stayed for the general assembly. The organizers of Occupy Cal asked those who were willing to stay and link arms to protect those who were attempting to set up the encampment; I chose to do so. I knew, both before and after the police gave orders to disperse, that I was engaged in an act of civil disobedience.

I want to stress both of those words: I knew I would be disobeying the police order, and therefore subject to arrest; I also understood that simply standing, occupying ground, and linking arms with others who were similarly standing, was a form of non-violent, hence civil, resistance. I therefore anticipated that the police might arrest us, but in a similarly non-violent manner. In my opinion, time to think is exactly what gives liberal education the value that it has. Inside Higher Ed: University of California Berkeley protesters occupy campus.

Tuesday, as police were shutting down the New York City headquarters of the protesters who sparked the now-global “Occupy” movement, on the other side of the country, thousands of students at the University of California at Berkeley came out with a vengeance after some were beaten during a confrontation with campus police last week, in which 39 were arrested as officers tried to block a campsite from forming. 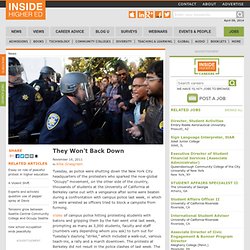 Video of campus police hitting protesting students with batons and gripping them by the hair went viral last week, prompting as many as 3,000 students, faculty and staff (numbers vary depending whom you ask) to turn out for Tuesday’s daylong “strike,” which included a walk-out, various teach-ins, a rally and a march downtown. The protests at Berkeley did not result in the police clashes of last week. The photographs with this article, from the Nov. 9 "day of action" at UC-Berkeley, were taken by Brian Barsky, a professor there. Chancellor’s message regarding last week’s events on campus. By Public Affairs, UC Berkeley | November 14, 2011 Dear Cal Campus Community: I returned to Berkeley yesterday after a week-long trip to Seoul, Tokyo and Shanghai where we successfully advanced some important new partnerships that will benefit our campus. 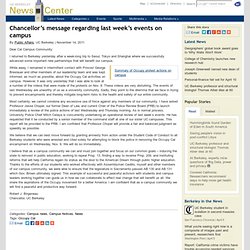 While away, I remained in intermittent contact with Provost George Breslauer and other members of our leadership team and was kept informed, as much as possible, about the Occupy Cal activities on campus. Berkeley Chancellor Grants “Amnesty” to Students Beaten By UC Cops Last Week. UC Berkeley Chancellor Robert Birgeneau, just back from an weeklong trip abroad, has reviewed the video of last week’s police brutality on campus and declared them “very disturbing” and “unworthy of us as a university community.” 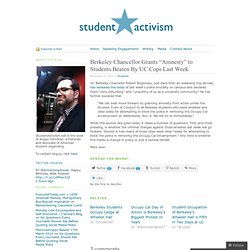 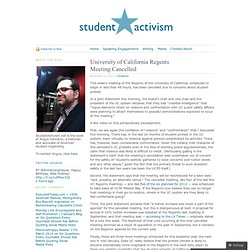 In a joint statement this morning, the board’s chair and vice chair and the president of the UC system declared that they had “credible intelligence” that “rogue elements intent on violence and confrontation with UC public safety officers were planning to attach themselves to peaceful demonstrations expected to occur at the meeting.” A few notes on this extraordinary development. First, we see again the conflation of “violence” and “confrontation” that I discussed this morning. There has, in the last 26 months of student protest in the UC system, been virtually no violence against persons perpetrated by activists.

There has, however, been considerable confrontation.

Occupy Berkeley: 'Cops hit us with batons in stomachs' Here are a list of Police Officer names that beat US Berkeley students : occupywallstreet. Photo Album. UC cops' use of batons on Occupy camp questioned. A debate over the use of police force has reignited at the UC Berkeley campus after videos surfaced showing officers repeatedly shoving and jabbing screaming students who tried to keep officers from dismantling a nascent Occupy encampment. 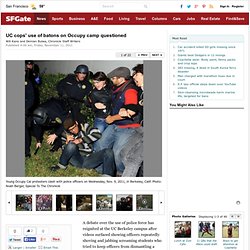 The videos taken by protesters, journalists and casual observers show UC Berkeley police and Alameda County sheriff's deputies in riot gear ordering students with linked arms to leave a grassy area outside the campus administration building Wednesday. When the students didn't move, police lowered their face shields and began hitting the protesters with batons. University police say the students, who chanted "You're beating students" during the incident, were not innocent bystanders, and that the human fence they tried to build around seven tents amounted to a violent stance against police. But many law enforcement experts said Thursday that the officers' tactics appeared to be a severe overreaction. Sgt. Questionable actions Handling civil disobedience. Tents removed from Sproul Plaza; two arrested in peaceful sweep.

By Public Affairs, UC Berkeley | November 17, 2011 An occupier sits atop one of two pianos removed from Sproul Plaza early Thursday, guarding the instruments until they could be trucked away. An Occupy Cal encampment of 20 tents was dismantled at 3:30 this morning after UC Berkeley police issued dispersal orders and provided protestors five minutes to collect their personal belongings and any others materials they wanted. Two decided to peacefully submit to arrest. They were arrested for lodging and failure to disperse, according to UC Berkeley Police Capt. Occupy Cal Berkeley - Tribal Dancers on Sproul Plaza - November 17th.

Occupy Cal (UC Berkeley) Floating Tents. UCPD continues to harass students (and non-students) at their homes. Late last week we reported that UCPD showed up to a recent graduate’s home the morning after the Regents’ meeting. This individual had been maced multiple times last Wednesday at UCSF. Pepper spray still in his eyes, he gave a relatively lengthy interview to KTVU. UC picks our pockets at the barrel of a gun. What are we going to do about it? Update from a comrade who was posting these fliers today: “Cops are taking the flyers away from folks even if they are posted in ‘designated areas.’ They have written a couple folks up for ‘association.’ They said they are worried for Kemper’s (the cop in the flyer) life. And here I thought we were the ones worried for our lives?

Student protesters rally for higher education at state Capitol. SACRAMENTO — Around 40 UC Berkeley students traveled to Sacramento Monday to join a group of 2,000 protesters demonstrating in the March for Higher Education, a lobbying effort to increase state funding for universities and community colleges. The peak of the event was a noon rally on the steps of the Capitol building in which representatives from the UC, CSU and community college campuses voiced their demands to legislators. Despite the recent passage of Proposition 30, which prevented midyear tuition hikes, speakers voiced concern over long-term tuition increases, decreasing Pell Grants and newly proposed unit caps. “I’m here today to make sure the state doesn’t decrease funding for public education,” said ASUC Senator and SQUELCH! Presidential candidate Jason Bellet. “Prop. 30 didn’t solve the problem — in many ways, it’s a Band-Aid for a much larger wound.” Gov. Cloudminder.